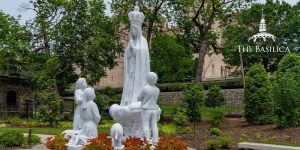 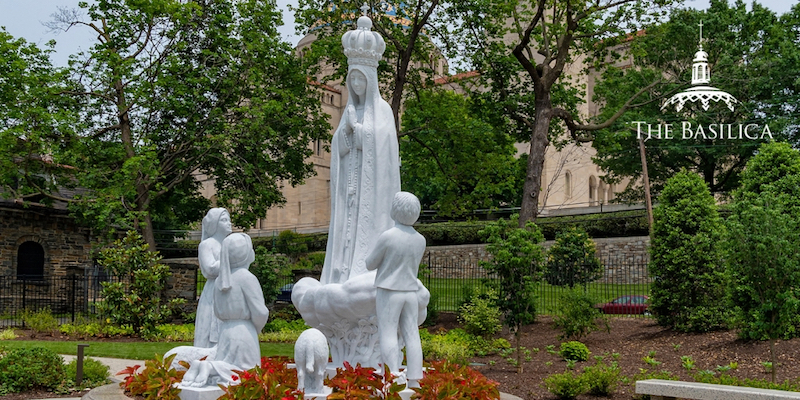 On May 13, we celebrate the Feast Day of Our Lady of Fatima. According to tradition, the Virgin Mary appeared on May 13, 1917 to three shepherd children, Lúcia dos Santos, Francisco Marto, and Jacinta Marto, near Fatima, Portugal. The first sighting was followed by five additional sightings, the last occurring on October 13, 1917.

Her appearances were always on the 13th of the month, and she asked the children for devotion to her Immaculate Heart and to pray the Rosary daily for the conversion of sinners. During the last sighting, she told the children her name was The Lady of the Rosary and gave them a message of prayer, peace, and penance known as the “Secret”.

Lúcia later became a Carmelite nun and wrote her Memoirs in 1942, revealing the first two parts of the “Secret.” The first was a vision of hell. She wrote:

Our Lady showed us a great sea of fire which seemed to be under the earth…The demons could be distinguished by their terrifying and repulsive likeness to frightful and unknown animals, all black and transparent. This vision lasted but an instant. How can we ever be grateful enough to our kind heavenly Mother, who had already prepared us by promising, in the first Apparition, to take us to heaven.

The war is going to end: but if people do not cease offending God, a worse one will break out during the Pontificate of Pope Pius XI. When you see a night illumined by an unknown light, know that this is the great sign given you by God that he is about to punish the world for its crimes, by means of war, famine, and persecutions of the Church and of the Holy Father.

On May 13, 2000, the third part of the secret was disclosed; it was the story of a “bishop clothed in white” who is killed. It is believed that this was a foreshadowing of the assassination attempt on Pope John Paul II.

Pope John Paul II wrote to Sr. Lúcia after the assassination attempt on May 13, 1981, stating that “it was a mother’s hand that guided the bullet’s path and in his throes [he] halted at the threshold of death.” He later made a pilgrimage to Fatima, giving one of the bullets from the attempt to the shrine, where it was placed in the crown of the statue of Our Lady.

Our Lady of Fatima is portrayed in two different areas of the Basilica. A statue of Carrara marble is located in the Rosary Walk and Garden, and in the Our Lady of Fatima Oratory in the Great Upper Church, she is depicted in bronze.