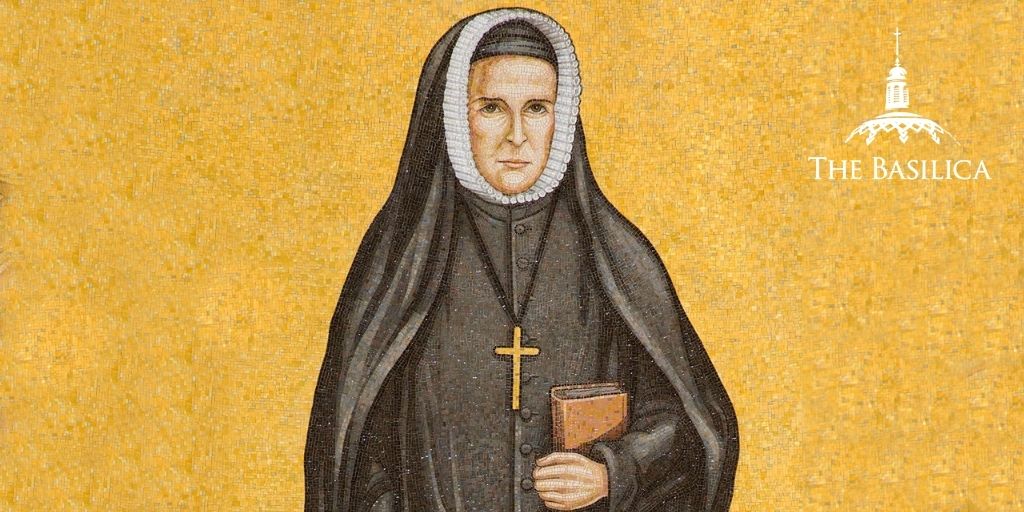 On November 18, we celebrate the Memorial of St. Rose Philippine Duchesne, who founded multiple schools in Missouri. Called “the Woman-Who-Prays-Always” by the Potawatomi, she dedicated herself to serving others in whatever way she could, even as her health began to deteriorate. Today we invite you to learn more about her life and where she is portrayed in the Basilica.

On August 29, 1769, Saint Rose Philippine Duchesne was born in Grenoble, France. When she was 18, she joined the Convent of the Visitation of Saint Marie d’en Haut as a novice. However, after the Reign of Terror upended religious life in the region, Philippine couldn’t return to a convent until 1804, when she joined the Society of the Sacred Heart of Jesus. There, she felt a deep calling to pursue missions; in a letter to the order’s founder, Mother Barat, she once wrote:

“I spent the entire night in the new World … carrying the Blessed Sacrament to all parts of the land … I had all my sacrifices to offer: a mother, sisters, family, my mountain! When you say to me ‘now I send you.’ I will respond quickly ‘I go.’”

Despite the sense of urgency she felt, Philippine was unable to pursue foreign missions until 12 years later, when Bishop Duborg of Louisiana requested help to start a school along the Missouri River.

A New Chapter for Philippine

In 1818, Philippine traveled to a small cabin in St. Charles, Missouri, with five other women to found the first order of the Society of the Sacred Heart outside of France. The mission was not without challenges: Philippine had trouble learning English and interacting with the Native Americans, and also faced financial difficulties. She also founded the first free school west of the Mississippi that year, and within the decade, founded six houses in the Mississippi Valley.

In 1841, Philippine went to work directly with the Native American community in Sugar Creek, Kansas, where she founded a girls’ school. Yet as a 71-year-old woman, she was unable to do much physical labor, and instead spent much time in prayer – inspiring the Potawatomi to call her “the Woman-Who-Prays-Always.” Experiencing poor health and difficulties learning the language, she returned to Missouri to oversee operations at the houses.

In 1852, Philippine passed away at age 83. The patroness of perseverance amid adversity, she is honored in the Basilica in a statue in Memorial Hall and in the Trinity Dome mosaic. In 1988, Rose Philippine Duchesne became the fourth citizen of the United States to be canonized.

In honor of St. Rose Philippine Duchesne, we invite you to light a candle today at the National Shrine. Vigil candles burn in the chapels throughout the Great Upper Church and lower crypt level of the National Shrine. Each candle represents the faith of the supplicants and their fervent prayers entrusted to the loving intercession of the Blessed Mother.