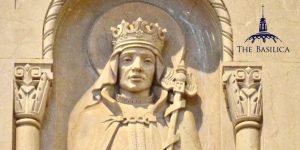 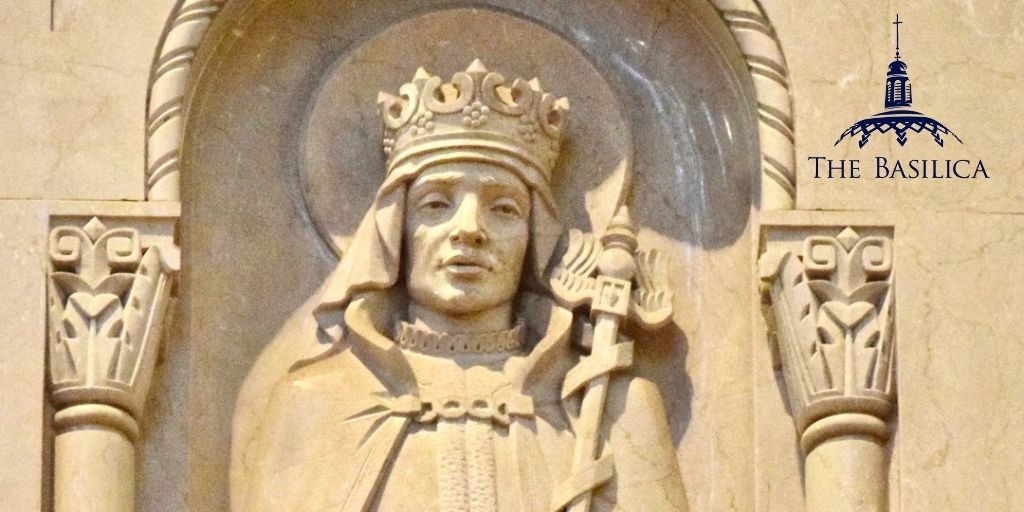 On November 16, we celebrate the Memorial of St. Margaret of Scotland. The epitome of the just ruler, she is remembered for her devout spiritual life and dedication to others during her time as queen of Scotland. Today we invite you to learn more about her life and where you can find her portrayed in the Basilica.

The daughter of a Hungarian princess and an English prince, Margaret was raised in the court of Edward the Confessor in England. When William the Conqueror and the Normans invaded the country, she faced grave danger as one of the last members of the Anglo-Saxon royal family. Seeking to escape, she set off towards Hungary, but was shipwrecked off the coast of Scotland, where King Malcolm III offered her a safe place to stay. In 1070, she married Malcolm and became queen of Scotland. Together, they had eight children: six sons (one of whom became the revered King David I) and two daughters (one of whom became Queen Maud of England when she married Henry I).

Margaret practiced a lifestyle of asceticism and selflessness, dedicating herself to many good works for churches and abbeys – from creating needlework for church paraments, to establishing new schools and churches in the country. Her devotion to prayer, holiness, and caring for others was so profound that it began to affect her husband. Though previously known for his volatile temper, Malcolm grew more patient and began to join her in her spiritual practices. These included the observation of a second Lent before Christmas, where the king and queen would wake at midnight to listen to matins with the monks. The poor would wait for her after the matins, and she would select six of them to receive alms and have their feet washed by her.

Malcolm’s manners also improved because of his wife’s genteel influence, and though he never learned to read, he developed a deep respect for Margaret’s books and had elaborate covers made for them.

Sadly, there was a brutal attack on the castle in 1093 that resulted in the death of Malcolm and their son Edward. Margaret, who had already been suffering from poor health, passed away four days later at age 47. She was canonized in 1250 and declared patroness of Scotland in 1673.

Today, her selflessness and devotion continue to inspire the faithful around the world. As Pope John Paul II once said, “We may look to the shining example of Saint Margaret of Scotland for confirmation that what is done for the least of our brothers and sisters is done for Christ himself.”

St. Margaret is portrayed in the Basilica in the northwest nave bay in the Great Upper Church.

In honor of St. Margaret of Scotland, we invite you to light a candle today at the National Shrine. Vigil candles burn in the chapels throughout the Great Upper Church and lower Crypt level of the National Shrine. Each candle represents the faith of the supplicants and their fervent prayers entrusted to the loving intercession of the Blessed Mother.

Light a candle
St. Rose Philippine Duchesne: A Life of Prayer and Perseverance
St. Josaphat: A Champion for Reform and Reunification