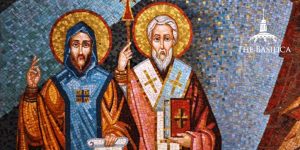 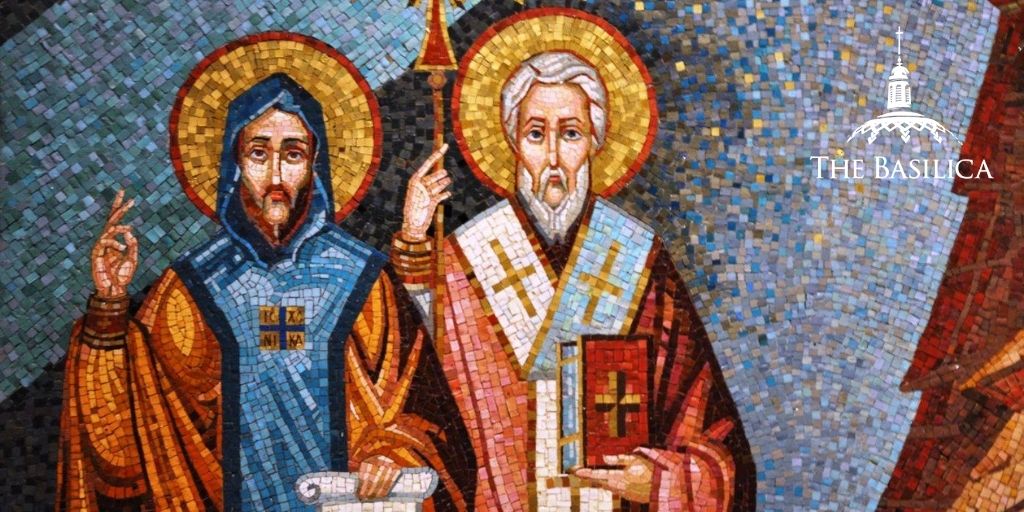 On February 14, we celebrate the Memorial of Saints Cyril and Methodius, two brothers who were known for their monumental work inventing the early form of the Cyrillic alphabet and translating the Bible into the Slavic language. Despite facing enduring opposition, they persevered faithfully in spreading the Gospel until their deaths. Today, we invite you to learn more about their lives and legacies and discover where they are portrayed in the Basilica.

Cyril and Methodius were born in Thessalonica in the early 800s. At a young age, they pursued studies in the humanities at Constantinople, where they distinguished themselves with their sharp intellects. Methodius went on to join the monastery of Polychronius, and Cyril was given a special mission by the Empress Theodora to bring Christianity to the Khazer tribes of the land beyond the Chersonese. On his way there, he discovered the remains of St. Clement I attached to an anchor and took them with him on the rest of his journey.

Cyril dedicated himself to studying the language and evangelizing to the Khazer. Striving to exemplify the Christian virtue of self-control, he rarely accepted gifts from the inhabitants, who in turn were moved by his teaching and piety to abandon their superstitions for the saving grace of Christ.

Cyril and Methodius Go to Moravia

Following this mission, Cyril returned to Constantinople, where he joined the same monastery as Methodius. But shortly after, the brothers were selected for a new mission to Moravia. To this end, Cyril invented an alphabet for the Slavic language (what would eventually become known as Cyrillic), which had never had a written form before. This enabled him to translate the Bible into Slavic, making the Gospel more accessible to the people of Moravia. As a result of his efforts and evangelization, many of them turned to Christ.

There, they were accused of flouting ancient customs and holy rites by preaching in the vernacular instead of the Latin liturgy. Fortunately, their strong defense convinced Adrian and the clergy of their goodwill and noble conduct, and he made them bishops.

Cyril passed away on February 14, 869, and was buried in the Basilica of St. Clement. Following his death, Methodius returned to Moravia, where he served as a teacher to Prince Svatopluk. However, when the young prince neglected his duties despite repeated warnings, Methodius excommunicated him.

The move incited Svatopluk’s ire, and he cast Methodius into exile, but the exclusion didn’t last long; after a time, Methodius was recalled and Svatopluk came to see his error, dedicating himself to a fresh life. Methodius continued to spread the Gospel across the continent, to the Liburnians, Serbians, Pannonians, Bulgarians, Dalmatians, and others.

Once again, Methodius faced accusations over use of the vernacular in the liturgy, and defended himself in Rome before Pope John VIII and a group of bishops and clergy in 880. Though he succeeded in convincing them of his innocence, the pope had to write many letters testifying to his good character before he was free to pursue his ministry again. He travelled to Bohemia, where he led Prince Boriwoj and his wife to Christ, and continued across Europe, spreading the Gospel and establishing episcopal Sees before he passed away in 884.

You can find Saints Cyril and Methodius portrayed in the Basilica in the north façade, the Our Lady of Holy Hostýn Chapel, the Byzantine-Ruthenian Chapel, and the west chancel clerestory window.

Encyclical of Pope Leo XII on Sts. Cyril and Methodius, the Vatican.

Who invented the mechanical clock?
No Perfect Relationship: Couples of the Bible: Part I