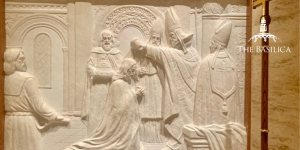 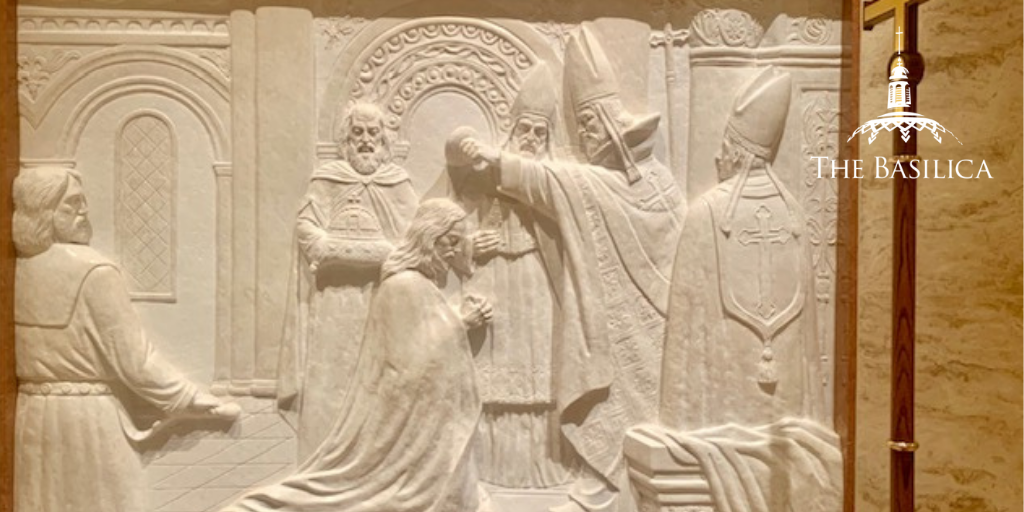 This post is the first of a new series called “Holy Fathers in the Art of the Basilica,” exploring the lives and ministries of the different popes featured in America’s Catholic Church. Today, we begin with a reflection on the life of Pope Sylvester II.

Pope Sylvester II was not only a zealous man of faith, but also an avid scholar, renowned for inventing the mechanical clock. His story reminds us that even when the future is unclear and opportunities seem to pass us by, God has given each of us unique abilities which we can use to glorify Him, wherever we are. Today we invite you to learn more about his life and legacy, and where you can find him in the Basilica.

Originally known as Gerbert, Pope Sylvester II was born to French commoners in the mid 900s. When he grew old enough, he joined the Benedictine monastery in Aurillac, France, where he studied the Scriptures along with a wide range of literature, distinguishing himself with his meticulous scholarship. Gerbert’s diligence captured the notice of a Spanish count, who enlisted him to study natural science and mathematics in Spain.

Gerbert quickly proved his intellectual adaptability, stunning his peers with a groundbreaking invention: the first mechanical clock, which used a pendulum to keep track of the time. This revolutionary timepiece shaped the way individuals across the world kept time for centuries afterwards. Later, he travelled to Rome to study theology under Bishop Hatto, and soon received a teaching position at a cathedral school. In 983, Gerbert was put in charge of the abbey of Bobbio in Italy, but due to a lack of funding, he returned to France to continue his work in education.

Gerbert’s path to the papacy was at times unfairly impeded due to competing political interests. Before the Archbishop of Reims died in 988, he recommended that Gerbert succeed him, but the French king’s natural son Arnulph was ultimately chosen instead.

Arnulph had scarcely served for three years before he had to step down amidst rumors about his involvement in treason against the crown. It seemed that the Archbishop’s dying wishes would be honored at last; finally, Gerbert was selected to replace him. But unfortunately, in 995, church leaders determined that Arnulph was innocent and reinstated him as Archbishop, forcing Gerbert to withdraw.

After losing his position in Reims, Gerbert joined the court of Emperor Otto III in Rome, serving as the ruler’s instructor until being appointed the Archbishop of Ravenna in 998. When Pope Gregory V died the following year, Otto III used his influence as emperor to ensure the position went to Gerbert, making him the very first French Pope.

Now called Pope Sylvester II, Gerbert zealously carried out his new duties. His background in education greatly impacted how he led the Church, and he was often heard saying: “Let us always unite knowledge and faith.” Pope Sylvester II strove to promote men of strong character to positions in the Church, and tirelessly worked to prevent abuses, especially concerning the sale of indulgences. During this time, he also helped grow the Church throughout the rest of Europe, establishing ecclesiastical metropolitans in both Poland and Hungary.

Sylvester II only served as Pope for four years before he passed away. Over the course of his life, he wrote on a wide range of topics, including mathematics and philosophy, and also introduced the use of Arabic numerals to European mathematics.

Pope Sylvester II provides a beautiful example of how believers should use the talents that God gives them to help others. As Pope John Paul II once said:

“[Pope Sylvester II] reminds us that intelligence is a marvellous gift from the Creator… his intellectual and spiritual attitude is a call to the Pastors and the faithful of the present age: go in search of the truth; find inner strength in prayer; be concerned for the moral search and serve mankind.”

You can find Pope Sylvester II portrayed in the Basilica in the Our Lady of Hungary Chapel.

Message of John Paul II to the Bishop of Saint-Flour on the 1,000th Anniversary of the Election of Gerbert of Aurillac as Pope Sylvester II, April 7, 1999. The Vatican.

St. Boniface of Lausanne: Faithfulness in the Face of Opposition
Saints Cyril and Methodius: Champions of the Gospel