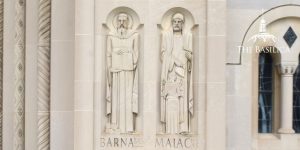 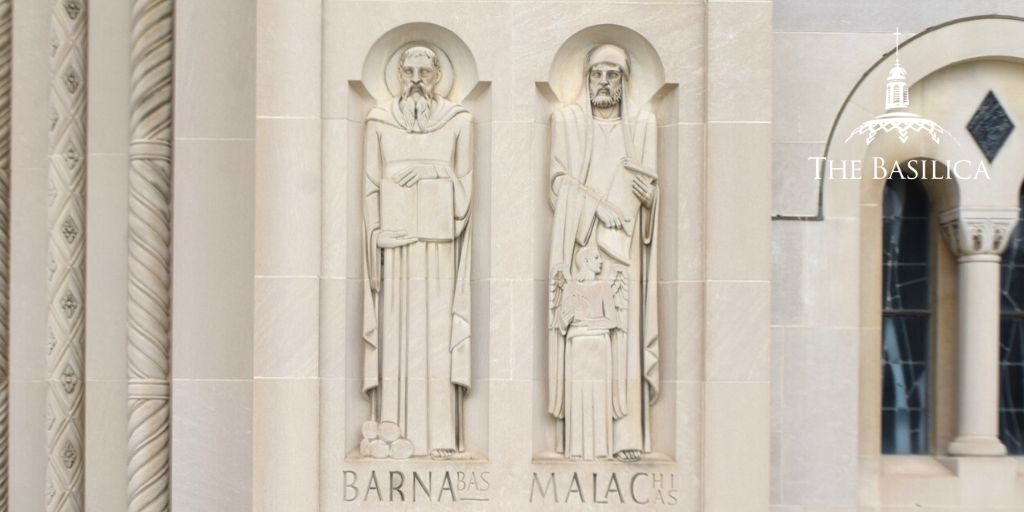 On June 11, we celebrate the Memorial of St. Barnabas, who was an influential leader in the early church, bringing many to Christ and helping grow the infant church. Together with Paul, he led the church at Antioch and planted churches throughout Asia Minor. He is depicted in the Basilica in the East Buttress of the South Entrance.

What Do We Know about Barnabas?

Also known as Joseph, Barnabas was Jewish and a member of the Christian community in Jerusalem. His name, which means “son of encouragement,” aptly describes his steadfast support of many in the church. Acts 11:24 describes him as “a good man, filled with the Holy Spirit and faith.”

The Bible first mentions Barnabas in Acts Chapter 4, which relates how he sold his property and donated the proceeds to the apostles to further the growth of the church. In the early days following Paul’s conversion, Barnabas advocated for him to his fellow disciples. Given Paul’s past history of persecuting Christians, the disciples were skeptical of the sincerity of his conversion. Barnabas, however, was unafraid, testifying to Paul’s acts of faith and enabling Paul to join their ministry (Acts 9:26-28).

Barnabas later joined Paul, serving alongside him to expand the church in Antioch. They also embarked on Gospel missions to Seleucia, Cyprus, Pisidia, Iconium, and Lystra before returning to Antioch. Paul and Barnabas eventually separated after a disagreement over whether they should take Mark with them on a second journey to encourage the believers in each city. Paul then took Silas with him to Syria, while Barnabas took Mark and traveled to Cyprus. 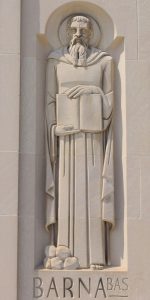 A Gospel for All

But when the Jews saw the multitudes, they were filled with jealousy, and contradicted what was spoken by Paul, and reviled him. And Paul and Barnabas spoke out boldly, saying, “It was necessary that the word of God should be spoken first to you. Since you thrust it from you, and judge yourselves unworthy of eternal life, behold, we turn to the Gentiles. For so the Lord has commanded us, saying,

‘I have set you to be a light for the Gentiles,
that you may bring salvation to the uttermost parts of the earth.’”

During a time when many converted Jews still looked down on Gentiles, Barnabas and Paul made it clear that the Gospel was for all who would believe – not just for the Jews. Paul affirms this in Romans 1:14-16:

To Greeks and non-Greeks alike, to the wise and the ignorant, I am under obligation; that is why I am eager to preach the gospel also to you in Rome. For I am not ashamed of the gospel. It is the power of God for the salvation of everyone who believes: for Jew first, and then Greek.

The Gentiles, in contrast, received the Gospel with open hearts and marveled at Paul and Barnabas. Acts 14 describes their ministry at Lystra, including the miraculous healing of a crippled man:

At Lystra there was a crippled man, lame from birth, who had never walked. He listened to Paul speaking, who looked intently at him, saw that he had the faith to be healed, and called out in a loud voice, “Stand up straight on your feet.” He jumped up and began to walk about. When the crowds saw what Paul had done, they cried out in Lycaonian, “The gods have come down to us in human form.”

The onlookers tried to offer sacrifices to Barnabas and Paul, calling them Zeus and Hermes; but the apostles directed them toward the true God:

The apostles Barnabas and Paul tore their garments when they heard this and rushed out into the crowd, shouting, “Men, why are you doing this? We are of the same nature as you, human beings. We proclaim to you good news that you should turn from these idols to the living God, ‘who made heaven and earth and sea and all that is in them…

After they had proclaimed the good news to that city and made a considerable number of disciples, they returned to Lystra and to Iconium and to Antioch. They strengthened the spirits of the disciples and exhorted them to persevere in the faith, saying, “It is necessary for us to undergo many hardships to enter the kingdom of God.”

Through the work of Barnabas, not only did the church at Antioch grow, but numerous churches were planted throughout Asia Minor, bringing many to Christ and strengthening the faith of believers.

June 12 Statements from Church Leadership Regarding Msgr. Rossi
How Saint Boniface Brought the Gospel to Germany