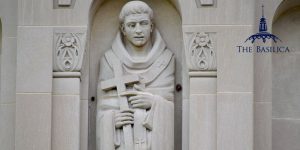 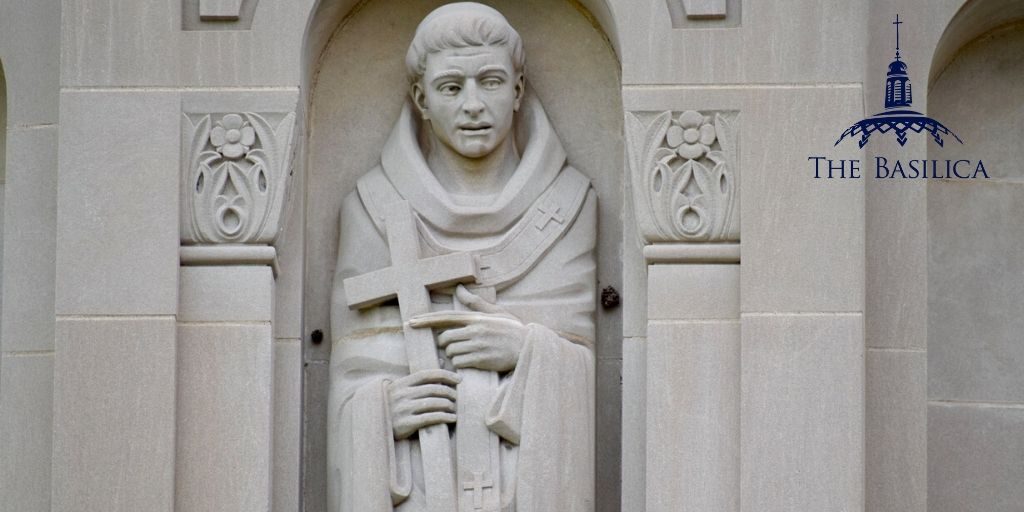 “Therefore go and make disciples of all nations, baptizing them in the name of the Father and of the Son and of the Holy Spirit, and teaching them to obey everything I have commanded you. And surely I am with you always, to the very end of the age.”
– Matthew 28:19-20

On June 5, we celebrate the Feast of Saint Boniface, who was instrumental in first bringing the Gospel to the pagan regions of Germany. Though he faced many difficulties in his mission, he remained understanding of those he ministered to and steadfast in his faith – even unto death. He is portrayed in the Basilica in the north façade.

A Man on a Mission

While Christianity had become fairly widespread in Bavaria and the Rhinelands by the turn of the 700s, Germany still remained largely unevangelized. It was in 722 that Boniface, an Anglo-Saxon monk, set out to spread the Gospel to these unreached people.

Not long after his arrival in 723, there was a confrontation between Boniface and the Germanic tribes in the region where he preached. Pagan traditions honoring the Norse gods, such as the worship of trees, were still pervasive amongst these people. Boniface, determined to demonstrate their gods’ lack of power, fell an oak tree dedicated to the Norse god Thor. Much like Elijah removing the prophets of Baal on Mount Carmel, Boniface made a public spectacle of the act. Though the pagans watched in suspense, anticipating some great calamity to be meted out upon Boniface’s head, none followed. The fact that Boniface’s act of desecration had yielded no divine punishment gave them a new respect for him, and many converted. In an act that would prove illustrative of the spiritual regeneration of the German people, Boniface took the wood from the oak tree and used it to build a church on the spot.

Boniface made considerable progress in his ministry, in part thanks to the support of Gaulish emperor Charles Martel. Even after Martel passed away, Boniface continued to receive royal endorsement for his work, and was appointed bishop of all Germany in 747. Throughout the 740s, Boniface accomplished significant reforms in the Christian communities in Gaul. The developments in the region so greatly encouraged Boniface that he believed Christianity could become the primary religion of central Europe.

As years passed, however, Boniface was dismayed to discover that his work with the Germans was far from finished. Many of them still wanted to continue their pagan practices despite confessing a belief in Christ’s sacrifice. When Boniface entered his seventies, he returned to the German tribes to “reconvert” them, focusing on the centrality and monotheism of the Gospel. This proved to be a struggle until the end of his life. One day, while he was reading in his tent, hostile members of a local tribe brutally attacked and killed him. Boniface did not struggle, but willingly committed himself into the hands of the Father, unafraid to die for his faith.

Saint Barnabas, the “Son of Encouragement”
Understanding the Doctrine of the Trinity