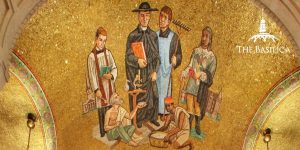 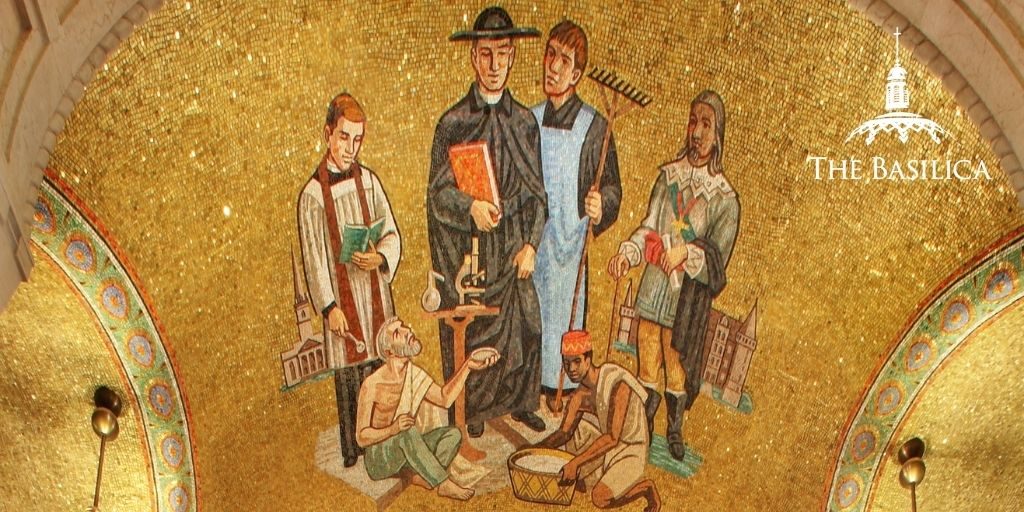 On September 27, we celebrate the Memorial of St. Vincent de Paul, a fearless man of faith who escaped slavery and dedicated his life to caring for the poor and downtrodden. The Universal Patron of Charity, he cofounded the Sisters of Charity with St. Louise de Marillac. Today we invite you to learn about his life and explore where he is portrayed in the Basilica.

Vincent de Paul was born in 1581 on a French farm, where he grew up and labored diligently alongside his three brothers, two sisters, and parents. He was fortunate enough to receive an education, and became a priest at a very young age. In France at this time, the life of a priest was generally one of comfort and even honor, and Vincent happily anticipated a pleasant future as he settled in a town far away from his rural homeplace.

However, all of that changed when Vincent travelled to Marseilles in 1605. What began as a journey to claim an inheritance was derailed by pirates who captured Vincent and sold him into slavery in Algeria. Two years passed before Vincent escaped and made his way back to France. After returning, he served as chaplain to Queen Margaret of Valois, and tutor to Count de Gondi, living in one of France’s most refined houses and learning the customs of the elite. He had narrowly eluded a life of misery – but the memories of his experience as a slave transformed him in ways he could never have imagined. In the years that followed, despite enjoying positions in places of distinction, he increasingly found himself drawn to ministering to the poor and downtrodden.

The Work of Vincent de Paul

Vincent’s circulation in affluent circles enabled him to effectively raise funds for a number of causes as he expanded his work. In 1619, he became chaplain to slaves in the area and later founded the Vincentians and Lazarists, a congregation for French peasants. He also worked to achieve prison reform and train lay people to care for the poor. But that wasn’t all; he also established seminaries, orphanages, hospitals, organizations for the poor, and ministries for the underprivileged, ill, and homeless. He also ransomed slaves from North Africa, and created relief organizations to deliver supplies to places affected by disaster.

The Legacy of Vincent de Paul

Together with St. Louise de Marillac, he founded the first non-enclosed order – the Sisters of Charity – in 1633, dedicated to caring for those in poverty and poor health. Speaking of their unconventional ways, he is said to have remarked:

“Their convent is the sickroom, their chapel the parish church, their cloister the streets of the city.”

At age 80, he passed away peacefully in his chair. You can find him portrayed in the Basilica in the west façade and the St. Vincent de Paul Chapel.

You can explore the St. Vincent de Paul Chapel virtually below!

In honor of St. Vincent de Paul, we invite you to light a candle today at the National Shrine. Vigil candles burn in the chapels throughout the Great Upper Church and lower crypt level of the National Shrine. Each candle represents the faith of the supplicants and their fervent prayers entrusted to the loving intercession of the Blessed Mother.

Light a candle
Our Lady of the Rosary: A Virtual Tour
The Centennial Finale: Highlights from the Basilica’s 100-year Celebration