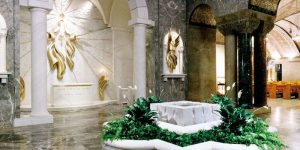 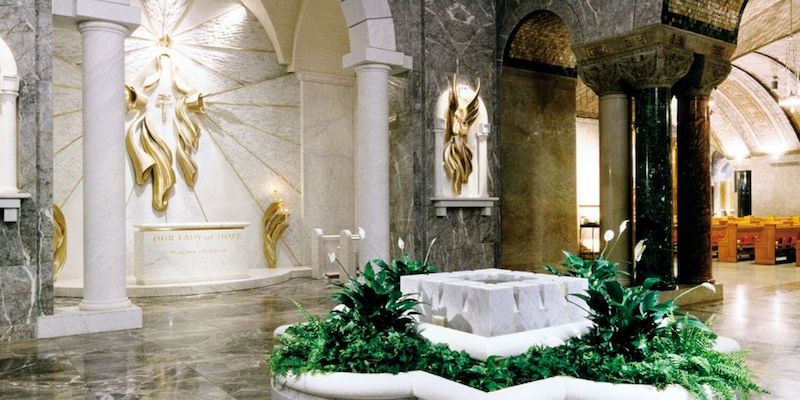 The Tradition of Our Lady of Hope

Tradition holds that during the Franco-Prussian War, Mary appeared to six children on January 17, 1871, in the village of Pontmain, France. She told them to pray for protection as troops approached the village and assured them that the conflict would soon come to an end. After the children and villagers prayed with their priest at the site of her appearance, the Prussian troops left the village, and one week later, the war ended. All of the Pontmain citizens who fought in the war returned safely home.

Veneration of Our Lady of Hope

Our Lady of Hope at the Basilica

The Chapel of Our Lady of Hope at the Basilica is a gift of the late Bob and Dolores Hope, in memory of Avis Townes Hope, the mother of the famed entertainer. Bronze sculptures of Mary and two angels are surrounded by white Carrara marble and Fior de Pesco marble. Carved into the façade of the altar are the words of Our Lady of Hope, “Pray my children.” The chapel features the following prayer:

O Mary, my Mother, I kneel before you with heavy heart. The burden of my sins oppresses me. The knowledge of my weakness discourages me. I am beset by fear and temptation of every sort. Yet I am so attached to the things of this world that instead of longing for Heaven I am filled with dread at the thought of death.

O Mother of Mercy, have pity on me in my distress. You are all-powerful with your Divine Son. He can refuse no request of your Immaculate Heart. Show yourself a true Mother to me by being my advocate before His throne. O Refuge of Sinners and Hope of Hopeless, to whom shall I turn if not you?

Obtain for me, then, O Mother of Hope, the grace of true sorrow for my sins, the gift of perfect resignation to God’s Holy Will, and the courage to take up my cross and follow Jesus.

But above all I pray, O dearest Mother, that through your most powerful intercession, my heart may be filled with Holy Hope, so that in life’s darkest hour I may never fail to trust in God my Saviour, but by walking in the way of His commandments I may merit to be united with Him, and with you in the eternal joys of Heaven. Amen.

What is the National Prayer Vigil for Life?
The Day of Prayer for the Legal Protection of Unborn Children – a Reflection