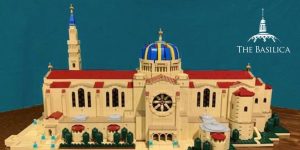 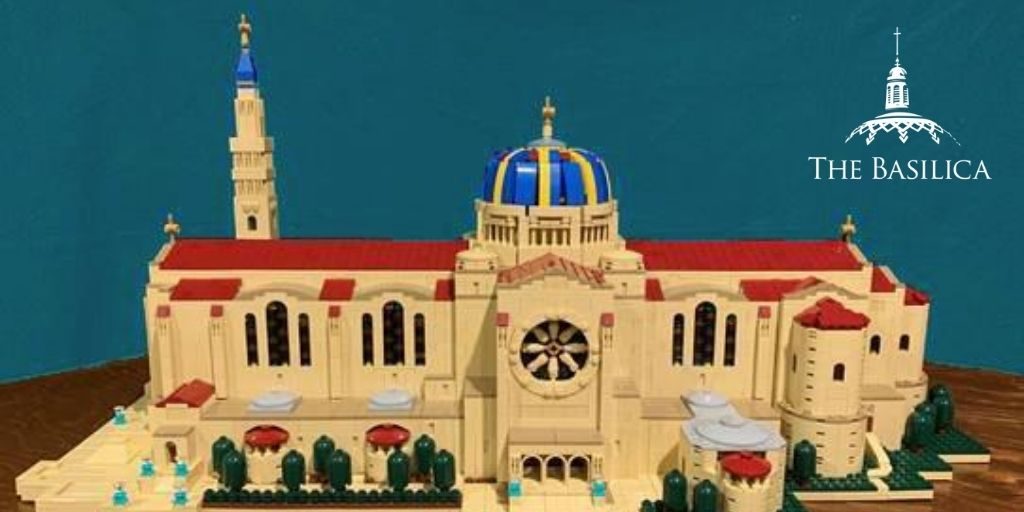 When pandemic lockdowns hit, John Davisson found himself itching for something to do. A LEGO enthusiast and Washington, D.C. resident, John was inspired by one landmark in particular: why not design and build a LEGO model of the largest Catholic church in North America?

Two months and 8,100 individual parts later, John completed the first-ever LEGO model of the Basilica of the National Shrine of the Immaculate Conception. We asked him a few questions about what inspired him to undertake this impressive project, as well as what his process was like, in today’s interview.

John, how did you first get into Lego sculpting?

I was a big fan of LEGO growing up, and I’ve never really kicked the habit. My brother and I often end up giving each other LEGO sets every Christmas and for birthdays, so it seems to run in the family.

But it was only recently that I started designing from scratch. Last year, after searching for a model of the U.S. Supreme Court building, I came across a brilliant design by another LEGO fan. I really enjoyed assembling that set and was inspired to learn more about the creative process behind it. From there, I was hooked, and got plugged into the online LEGO community and started tinkering with LEGO design software.

What inspired you to make a model of the Basilica?

We live close to the Basilica, and I’ve always thought it was a remarkable building. It’s striking to come over a hill in D.C. and see the dome and tower on the horizon, especially at night.

Most of the major D.C. landmarks have been rendered in LEGO at some point, but as far as I know, no one has done a design of the Basilica before. And after finishing a LEGO version of our house recently, I liked the idea of modeling something else from our neighborhood.

The Basilica is also full of interesting architectural elements—the dome, the rose windows, the tower, the arches—that seemed like they would make for a good LEGO design challenge. So I decided to give it a try.

How long did it take you to make the model of the Basilica?

It took about two months: four weeks to design the model, two weeks to acquire the parts, and two weeks to do the build. It was a great side project for quarantine!

Can you describe your process? Do you use software to plan out your projects? Do you have instructions/diagrams that you follow as a guide?

I began with some basic research on the history and design of the building, then stopped by the Basilica to take photos of the exterior. For the interior, I mostly relied on Google Street View, which has a 3D-walkthrough of the Basilica.

Based on those images, I started developing the model in Studio, which is a LEGO design program. Studio has a complete catalog of parts that LEGO has produced over the years, including discontinued pieces that are only available from third-party vendors. You can mix and match those parts to design virtually anything in LEGO form. It’s a great piece of software.

The design process was slow, but there were three major hurdles in particular. The first was settling on a scale. The Basilica is an enormous, intricate building. I wanted to capture as much detail as I could, but I had to cap the model at a reasonable size and take into account the types of specialized LEGO pieces that were available. Eventually I decided on a scale of approximately 1:250. I have a small supply of parts on hand, but the vast majority of the pieces were ordered specifically for this project (including about 900 roofing tiles).

The two other major challenges were the Trinity Dome and the rose windows. When you’re trying to create round structures in a mostly rectilinear medium, it can get complicated. So there are a lot of unusual connections and over 400 pieces packed into the dome! Same story for the rose windows, which are made up of about 100 pieces each. Those were a real puzzle.

Once I was satisfied with the design, I ordered the parts—about 8,100 total—from various sellers. Then I sat down and started building, working off the digital model I’d created in Studio. I had to make a few tweaks along the way, and the dome and windows were a headache to assemble. But overall the design worked out the way I’d hoped it would.

What are the dimensions and scale of the Basilica model you made?

Including the “grounds” around the Basilica, the model is 16 by 29 inches. The dome is 11 inches tall, and the tower tops out at 14 inches. The scale isn’t perfectly consistent due to some limitations of the medium, but it’s approximately 1:250. The model weighs just under 15 pounds.

Thank you for sharing your stunning work with us, John!

To navigate slideshow, click the arrows on the left or right of the image.