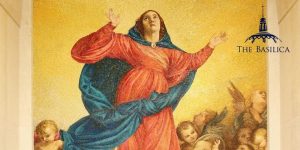 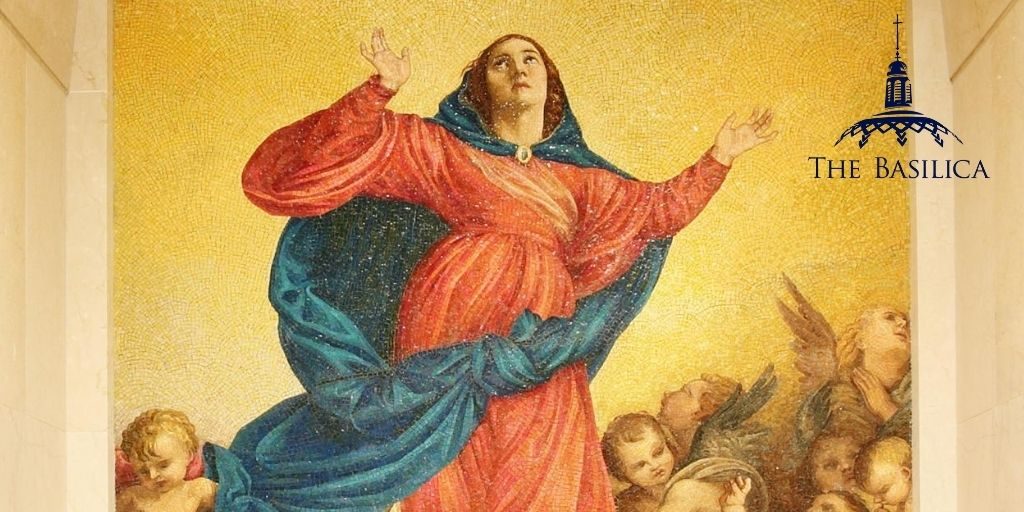 Commemorating Mary’s assumption into heaven, the Solemnity of the Assumption is celebrated on August 15. According to Church tradition, Mary was drawn up into heaven by God.

Doctrine of the Assumption

Because of Mary’s participation in the Incarnation of Christ, she was honored as a unique member of the Church. Just as Solomon brought the Ark of the Covenant to the Temple (1 Kings 8:17-21), Mary, as the Ark of the New Covenant, was brought to heaven to dwell where Christ is.

The west tympana of the Great Upper Church tell of significant events in the history of Marian doctrine, including the definition of the dogma of the Assumption in 1950 by Pope Pius XII (pictured right). Though the Assumption of Mary is not documented in the New Testament, it is expounded in Section 966 of the Catechism of the Catholic Church:

Finally the Immaculate Virgin, preserved free from all stain of original sin, when the course of her earthly life was finished, was taken up body and soul into heavenly glory, and exalted by the Lord as Queen over all things, so that she might be more fully conformed to her Son, the Lord of lords and conqueror of sin and death. The Assumption of the Blessed Virgin is a singular participation in her Son’s Resurrection and an anticipation of the resurrection of other Christians: In giving birth you kept your virginity; in your Dormition you did not leave the world, O Mother of God, but were joined to the source of Life. You conceived the living God and, by your prayers, will deliver our souls from death.

The Assumption is also affirmed by Pope Pius XII in his apostolic letter Munificentissimus Deus:

Now God has willed that the Blessed Virgin Mary should be exempted from this general rule [death]. She, by an entirely unique privilege, completely overcame sin by her Immaculate Conception, and as a result she was not subject to the law of remaining in the corruption of the grave, and she did not have to wait until the end of time for the redemption of her body.

The Assumption in the Basilica

The Assumption Chapel in the Great Upper Church depicts the Assumption, as well as its Old Testament parallel of Solomon bringing Ark of the Covenant into the temple.

The most significant portrayal of the Assumption is the mosaic in the Great Upper Church. Based on the painting by Titian, it was commissioned for the Basilica by Pope Pius XII. The enamel finish of the mosaic is left uneven and reflective, in contrast to its sister mosaic of the Immaculate Conception, which is smoothed to resemble a painting.

Prayer for the Occasion of the Assumption

Almighty ever-living God, who assumed the Immaculate Virgin Mary,
the Mother of your Son, body and soul into heavenly glory,
grant we pray, that, always attentive to the things that are above,
we may merit to be sharers of her glory.

Through our Lord Jesus Christ, your Son, who lives and reigns with you
in the unity of the Holy Spirit, one God, for ever and ever. Amen.

In honor of the Solemnity of the Assumption, we invite you to light a candle today at the Basilica. Vigil candles burn in the chapels throughout the Upper Church and lower crypt level of the National Shrine. Each candle represents the faith of the supplicants and their fervent prayers entrusted to the intercession of the Blessed Mother.

Light a candle
The Spiritual Leadership of St. Bernard of Clairvaux
Making the LEGO Basilica: A Conversation with Artist John Davisson