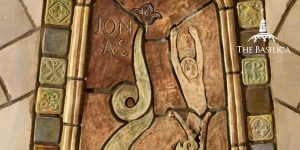 This post is the second installment in the Basilica’s Biblical Figures series, which highlights the stories of the individuals throughout the Scriptures who are portrayed in “America’s Catholic Church.” While some of them inspire us with their unwavering faithfulness, others serve as sober reminders of the consequences of sin. All of them have lessons to teach us about Christian living.

The story of Jonah is one with unusual characters: an unwilling witness, a giant fish, and an evil nation. But it is a story of God’s mercy, and God’s ability to use anyone for his glory.

A Hebrew prophet living during the reign of Jeroboam II, Jonah was visited by the Lord, who asked him to go to Nineveh to warn them of God’s impending judgement upon them. But Jonah disobeyed, taking a ship to Tarshish ­– a city in the exact opposite direction. A massive storm came upon the ship, causing the crew to cast lots to discover who was to blame, and the lot fell on Jonah. When he confessed that he was running from the Lord, they tossed him overboard.

Instead of allowing Jonah to drown, the Lord in his mercy caused a giant fish to swallow him. For three days, Jonah was trapped in the belly of the fish, where he prayed to the Lord. The fish then spat him onto the land, and Jonah traveled to Nineveh as God had commanded.

In Nineveh, Jonah proclaimed that the city would be overthrown – and to his surprise, the people of Nineveh repented. Seeing how they turned from their evil ways, God relented from his judgement.

One might expect Jonah to be happy that Nineveh turned from its wickedness, but he was angry when he learned that God was not going to destroy Nineveh. Jonah 4:2-4 describes:

He prayed to the Lord, “O Lord, is this not what I said while I was still in my own country? This is why I fled at first toward Tarshish. I knew that you are a gracious and merciful God, slow to anger, abounding in kindness, repenting of punishment. So now, Lord, please take my life from me; for it is better for me to die than to live.” But the Lord asked, “Are you right to be angry?”

Jonah then marched east of the city and sat and waited for it to be destroyed. The Lord sent a plant to bring him shade, but then killed it the next day. When Jonah responded again in anger, the Lord reprimanded him:

But God said to Jonah, “Do you have a right to be angry over the gourd plant?” Jonah answered, “I have a right to be angry—angry enough to die.” Then the Lord said, “You are concerned over the gourd plant which cost you no effort and which you did not grow; it came up in one night and in one night it perished. And should I not be concerned over the great city of Nineveh, in which there are more than a hundred and twenty thousand persons who cannot know their right hand from their left, not to mention all the animals? (Jonah 4:9-11)

With that, the book of Jonah ends! Though it may seem strange and abrupt, the ending summarizes what is at the heart of this small Old Testament book: God’s mercy.

Jonah reacted in anger because he wanted revenge; he wanted the Nineveh to be destroyed. Nineveh was part of Assyria, a violent pagan nation, known for torturing its enemies. Jonah only wanted God’s mercy for Israel, not its enemies. But God is rich in mercy and will save all who call on him. As he had mercy on the evil people of Nineveh, he is merciful to us. Psalm 145:8 says:

The Lord is gracious and merciful,
slow to anger and abounding in mercy.

Though Jonah couldn’t see it, throughout each step of his journey, he was a willing recipient of God’s small mercies. The Lord saved him from drowning, he protected him as he preached to those in Nineveh, and he grew a plant for him so he wouldn’t die of heatstroke. Yet Jonah was unwilling to show that same mercy to the people of Nineveh. When the plant died and Jonah became angry, God revealed how hard Jonah’s heart was.

The story of Jonah also displays God’s sovereignty. Although Jonah was an unwilling preacher, he could not thwart God’s plan. God still used him to proclaim his truth. We can take comfort in the fact that, no matter what mistakes we make, we are in no way powerful enough to spoil God’s plan!

Most importantly, Jonah’s imperfect example of three days spent in the belly of the fish foreshadows the perfect sacrifice that was to come. As Jesus says in Matthew 12:40:

We can learn from Jonah’s mistakes. We are not to view ourselves as better than those who are different from us – instead, we are to see others as God sees them: sinners in need of a Savior, just like us. We should be eager to share his Gospel with others, that they, too, may understand God’s power and mercy.

Jonah in the Basilica

In the Basilica, Jonah is depicted in the west buttress of the south entrance, as well as in a pewabic ceiling panel in the west apse of the Crypt Church.

View the previous biblical figures post on Ruth and Naomi.

Basilica Insider: The Art of Mary Stratton in America’s Catholic Church
Celebrating the Anniversary of the Incarnation Dome