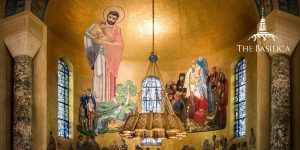 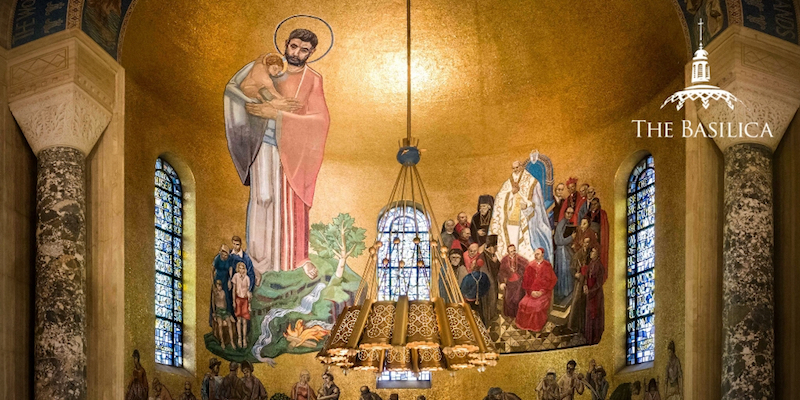 St. Joseph is present in many places throughout the Basilica. In the East Apse of the Great Upper Church, he can be seen in the St. Joseph, Defender of the Church and Patron of Workers Mosaic. The Crypt Level of the Basilica is home to the St. Joseph Chapel. As the earthly father of Jesus, St. Joseph played an important role in raising Jesus until the time of His ministry. On May 1st, we celebrate the Feast Day of St. Joseph the Worker to focus on the important connection between Joseph and the cause of workers.

Joseph is a role model in his obedience to God. Though the situation must have been difficult for Joseph, he did not hesitate to follow God’s command to keep Mary as his betrothed and lead his family.

Saint Joseph, Bridegroom of the Blessed Virgin Mary and Guardian of the Redeemer… the faithful and wise servant, received with obedient docility the will of the Lord, who entrusted him “his” family on earth, so that he might take care of it with daily devotion.

In his profession as a carpenter, Joseph demonstrated the value of human labor as instituted by God. God commanded Adam in Genesis 2:15 “The Lord God then took the man and settled him in the garden of Eden, to cultivate and care for it.” (NABRE) As Adam labored in the garden, Joseph labored in his profession, and we also should labor, to the glory of God.

It is necessary to live a spirituality that helps believers to sanctify themselves through their work, imitating St Joseph, who had to provide with his own hands for the daily needs of the Holy Family and whom, consequently, the Church holds up as Patron of workers. His witness shows that man is the subject and protagonist of work.

Butler’s Lives of the Saints

Watch: Together with Notre-Dame de Paris: A Benefit Concert at the Basilica
Lessons from the Life of Saint Catherine of Siena: Laywoman and Activist