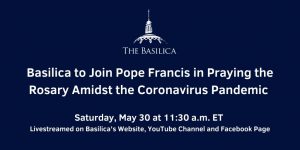 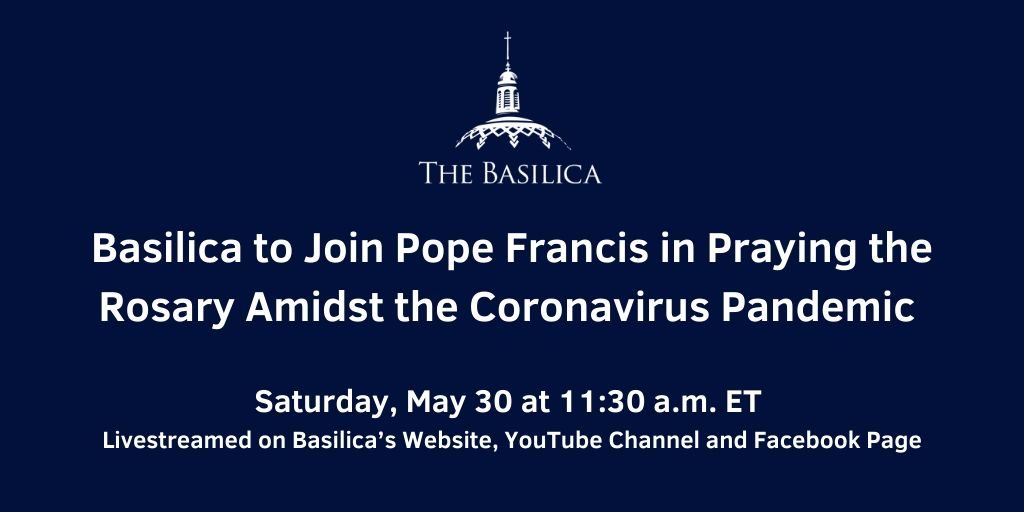 The Basilica of the National Shrine of the Immaculate Conception, the largest Roman Catholic church in North America and the preeminent Marian Shrine of the United States, will join Pope Francis and Marian shrines from around the world on Saturday, May 30, at 11:30 a.m. ET, in praying for the intercession of the Blessed Virgin Mary during this unprecedented time of pandemic.

“Devoted with one accord to prayer together with Mary (Acts 1:14) on the day before Pentecost, Monsignor Walter Rossi, Rector of the Basilica, along with Sisters Servants of Mary Immaculate, will pray the Rosary from the Great Upper Church at the same time the Holy Father leads the Rosary from the Lourdes Grotto inside the Vatican Gardens in Rome.

The recitation of the Rosary from the Basilica will be livestreamed at www.nationalshrine.org, and on the National Shrine’s YouTube channel and Facebook page. This livestream will also be transmitted to the Vatican where live video from the Basilica and other participating Marian shrines from around the world (to include Lourdes, Fatima, and Guadalupe, among others) will be sequentially shown onscreen in the Vatican Gardens for the Holy Father to see and broadcast worldwide to connect the faithful participating around the globe in this prayerful effort.

The Basilica of the National Shrine of the Immaculate Conception remains closed to the public until further notice due to the coronavirus pandemic, under the directives of the District of Columbia and guidance by the Archdiocese of Washington.

Though closed to the public since March 17, the priests of the Basilica have continued to celebrate the Holy Sacrifice of the Mass each day for the intentions of the faithful and for all who have been affected by the coronavirus, especially those who have died.

Since its closure, the Basilica has livestreamed Mass each Sunday at 12 noon, followed immediately by Exposition and Adoration of the Blessed Sacrament, recitation of the Rosary at 2:30 p.m. and the Divine Mercy Chaplet at 3 p.m., and concluding with Benediction at 3:15 p.m. This livestream has quickly generated a national and international online community with viewership in the tens of thousands each week among the many newfound homebound amid the pandemic.

The Basilica of the National Shrine of the Immaculate Conception, affectionately referred to as Mary’s Shrine, as well as America’s Catholic Church, is eager to reopen as soon as possible and resume plans to celebrate the 100th anniversary of the placing of its foundation stone on September 23, 2020.