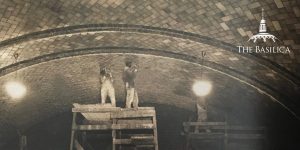 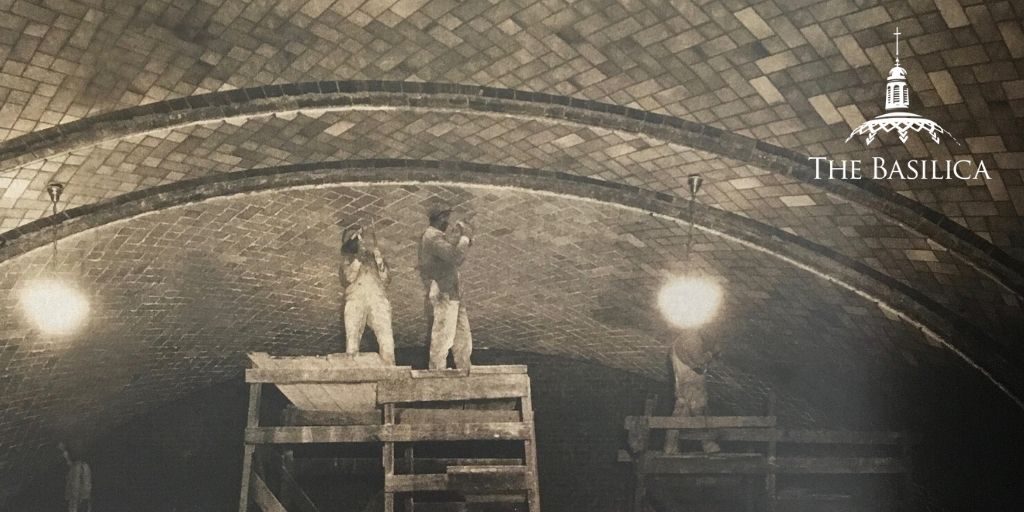 As we approach the Basilica’s centennial anniversary this September, we are highlighting the sacred art and architecture that makes “America’s Catholic Church” so unique. Today, we give readers an inside look into the forgotten construction technique used to build the Crypt Church and Great Upper Church: Catalan vaulting.

In the 19th century, the discovery of Portland cement was a game-changer for the construction industry. Portland cement could harden mortar without air, making it possible for cement to set between the bricks or tiles used in the construction process. Using a mixture of Portland cement, plaster-of-Paris, and other secret ingredients, the Spanish-born architect Rafael Guastavino Sr. modernized an ancient technique of Mediterranean tile-and-mortar construction, garnering global acclaim. Called the “Guastavino technique,” his process was described in 1859 by the Engineering News as follows:

The first layer of tiles is laid with a quick-setting mortar, composed principally of plaster-of-Paris. The other layers are laid in mortar composed chiefly of Portland cement. Its exact composition is a secret; but it adheres so closely to the tile and is so firm and solid when it has fully hardened that its strength is about equal to that of the tile itself and the whole arch is practically a monolithic mass, showing no tendency to separate at the joints more than at any other point.

What set the Guastavino technique apart?

Guastavino’s building technique, also called Catalan vaulting, cohesive construction, or timbrel vaulting, achieved its remarkable strength through the use of his secret mortar and layers of staggered tiles. The tiles were shifted 45 degrees with each layer, which increased the strength of the vault and created the distinctive herringbone pattern. The number of layers would be determined by the size of the vault and the weight-bearing specifications of the structure. The Rafael Guastavino Company had over 24 patents on the vaulting method, and performed construction for over 1,000 structures, including such notable landmarks as Carnegie Hall and Grand Central Terminal.

When Rafael Sr. passed away in 1908, his son Rafael Jr. carried on the family business in the United States, completing construction projects for the Shrine. The innovation of reinforced concrete in the mid 1900s, however, rendered the breathtaking Guastavino technique obsolete. The construction of the Great Upper Church was one of the final projects completed by the Guastavino Company before it shut down in 1962.

Where to find Catalan vaulting in the Basilica

Where the Catalan vaulting technique is most apparent in the Basilica is undoubtedly the Crypt Church, which contains approximately 35,000 visible tiles. The soft earth tones of the Woburn stone, arranged in the Guastavino signature herringbone pattern, provide the ideal background for the Pewabic ceramic tiles, rondels, and friezes interspersed throughout the ceiling. The combination of Pewabic ceramics and Guastavino vaulting is unique to the National Shrine and cannot be seen anywhere else in the world. The great arch Rafael Guastavino created in the ceiling of the Crypt Church has a weight-bearing capacity of almost one million pounds.

Basilica of the National Shrine of the Immaculate Conception Guidebook

Jubilee 2009: A Photographic History of the Basilica of the National Shrine of the Immaculate Conception 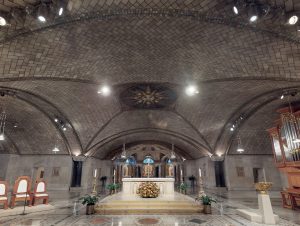 Interested in seeing more of the Crypt Church and its stunning examples of Catalan vaulting? Take a virtual tour! Not only was the Crypt Church the first area completed during construction, but it is where Mass is traditionally held throughout the day, along with Adoration, Rosary, and Confessions.

Take a virtual tour
Charles Lwanga: Faithful Unto Death
Basilica to Join Pope Francis in Praying the Rosary Amidst the Coronavirus Pandemic