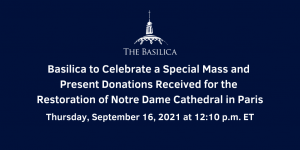 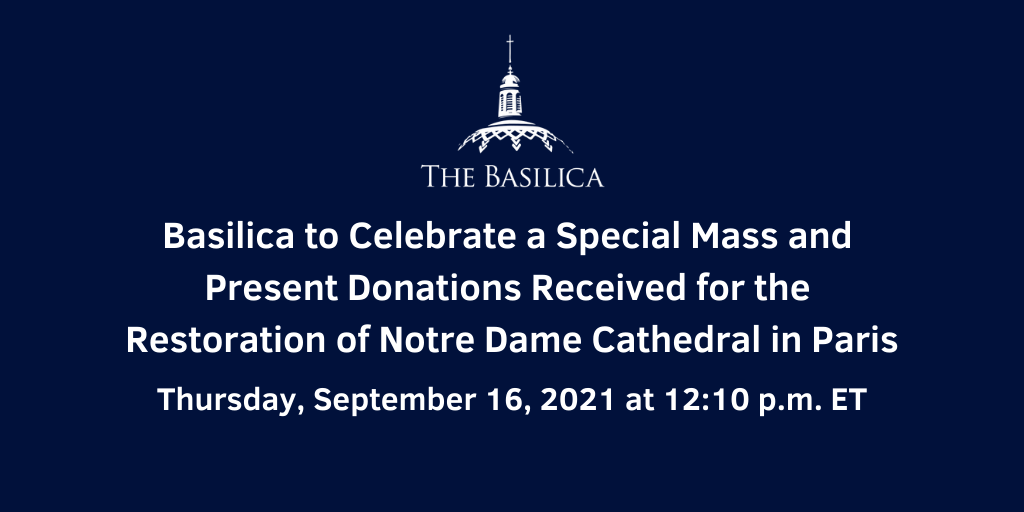 Rector of the Basilica

In the wake of the devastating fire at the Cathedral of Notre Dame in Paris that took place on April 15, 2019, the Basilica of the National Shrine of the Immaculate Conception established a special online collection to facilitate donations to support the restoration of the iconic cathedral, which, like Mary’s Shrine, is dedicated to Our Lady/Notre Dame, the Blessed Virgin Mary.

This Thursday, September 16, Cardinal Wilton Gregory, the Archbishop of Washington and the Chairman of the National Shrine’s Board of Trustees, will celebrate Mass—the Common of the Blessed Virgin Mary—at 12:10 pm in the Basilica’s Crypt Church.

During the Mass, Monsignor Walter Rossi, Rector of the Basilica, will present a check in the amount of $465,000 in donations collected by Mary’s Shrine from across the United States and from around the world to Monsignor Patrick Chauvet, the Rector of the Cathédrale Notre-Dame de Paris.

The Mass is open to the public and will be livestreamed at www.nationalshrine.org and broadcast on several Catholic television networks including EWTN, Catholic TV, and Salt+Light TV.