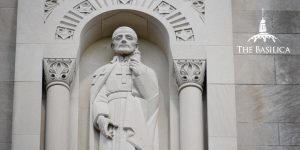 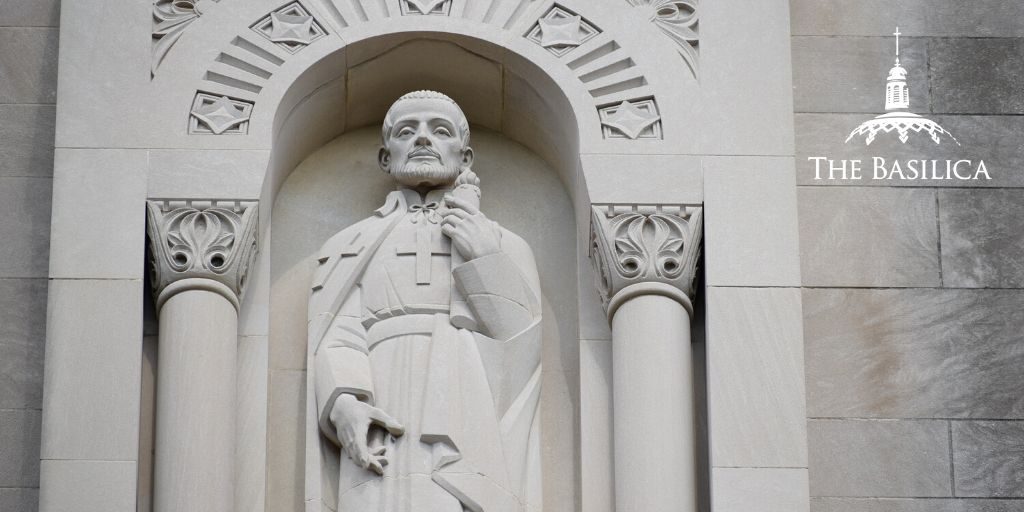 As you go, make this proclamation: “The kingdom of heaven is at hand.” Cure the sick, raise the dead, cleanse lepers, drive out demons. Without cost you have received; without cost you are to give.
– Matthew 10:7-8

Once a hardened soldier and gambler, St. Camillus de Lellis was changed by the grace of God, becoming a nurse and priest who transformed healthcare during the 16th century. His feast day is celebrated on July 18. In the Basilica, St. Camillus de Lellis is portrayed in the west façade, along with other heroes of charity, such as St. Vincent de Paul, and biblical depictions of healing and care, including the Good Samaritan and Jesus Healing the Paralytic.

St. Camillus de Lellis was born in Italy in 1550. An imposing man of six and half feet, de Lellis joined the army at a young age and fought against the Turks, but suffered a leg injury that brought him to a hospital in Rome. When he was sufficiently recovered, he worked as an orderly, but his quarrelsome manner resulted in his being returned to the battlefield.

However, he succumbed to a gambling addiction, and ended up losing all of his money and military equipment. Homeless and hungry in Naples, he found employment with an order of Capuchin monks. After finishing the building project, he was inspired by the religious influence of the monks and attempted to join the order, but was rejected due to his leg injury.

Ministry Among the Sick

Returning to the hospital in Rome, Camillus petitioned them to employ him as a nurse. With his renewed spiritual state, he determined to reform the hospital’s care. At the time, hospitals were essentially where people were sent to die: conditions were unsanitary and patients were often mistreated. Camillus revolutionized treatment, giving proper nutrition to the ailing, isolating contagious patients, and promoting cleanliness and fresh air, as well as showing the love of Christ to all he treated. Impressed by his work, the administrators made him superintendent of the hospital.

Ordination and Founding of a Religious Order

In 1584, Camillus was also ordained as a priest, and founded an order called the “Ministers of the Sick.” The men of his order served the wounded of the battlefields of Hungary and Croatia, making them the first recorded ambulance corps. Though he suffered from health problems himself, Camillus continued to serve the sick throughout his life, founding fifteen houses for his order and eight hospitals by the time of his death. The patron of the sick and healthcare workers, St. Camillus serves as an example of Christ-like care for the sick and less fortunate

A Testament to God’s Deliverance: Shadrach, Meshach, and Abednego
Basilica Insider: The Art of Mary Stratton in America’s Catholic Church