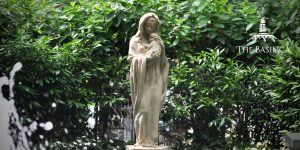 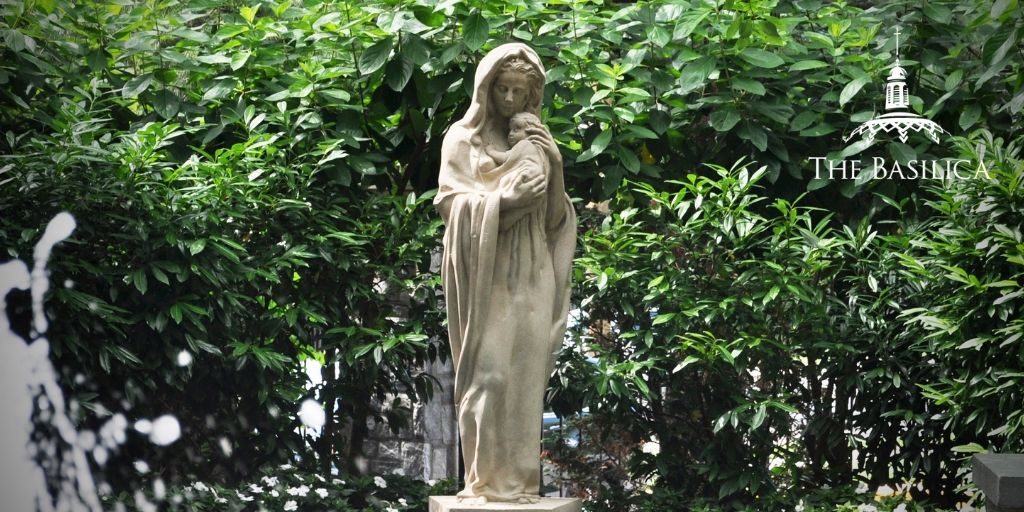 As we celebrate Mother’s Day this month, we hope you’ll take a moment to reflect on the stories of three mother saints who are portrayed in the Basilica. These mothers of the Church demonstrated an abundant love for Christ through their care for the young and the vulnerable in their communities and throughout the world. May their faith and dedication to Christ serve as an inspiration for your own devotion.

As the nation’s preeminent Marian shrine, dedicated to the patroness of the United States, the Basilica honors the Blessed Virgin Mary under her title of the Immaculate Conception. Thus, it is only fitting that we reflect first and foremost on Mary’s example as mother.

Mary played a critical part in the story of divine redemption, bearing and raising the Christ Child. Throughout over 80 chapels and oratories, the Basilica highlights how the motherhood of Mary’s extends beyond Jesus to the entire Church. Jesus remarks in Luke 8:21 that Mary is one of “those who hear the word of God and act on it.” Mary serves as the Blessed Mother by first and foremost showing us an example of the obedience due to our Father and his commands. Discover more places where Mary is honored as Mother in the Basilica.

Saint Théodore Guérin was born as Anne-Thérèse on October 2, 1798, in the town of Estables, France. The girl was devout from a young age, and at age 10, she told a parish priest that she intended to be a nun. When Anne-Thérèse was only 15, her father was murdered by bandits, leaving her to care for her mother and sister. In the face of personal tragedy and difficulty, Anne-Thérèse turned to God for solace.

At age 25, she joined the Sisters of Providence of Ruillé-sur-Loir, a religious order focused on caring for the sick and impoverished, as well as furthering children’s educational opportunities. There, she became known as Théodore, and was asked to take a group of women on a mission to Indiana to minister to pioneers.

In Indiana, Théodore founded the order of the Sisters of Providence of Saint Mary-of-the-Woods, establishing a motherhouse and a school. They faced untold trials in Indiana, from starvation and bitter winters to prejudice against Catholics. Throughout everything, however, she relied solely on God, telling her sisters, “Put yourself gently into the hands of Providence.” Théodore went on to establish two orphanages and more schools in the region, and eventually passed away on May 14, 1856. She is portrayed at the Basilica in a life-size limestone statue in the Rosary Walk and Garden and honored in a tablet in Memorial Hall.

What strength the soul draws from prayer! In the midst of a storm, how sweet is the calm it finds in the heart of Jesus. But what comfort is there for those who do not pray? – Mother Théodore

On August 29, 1769, Saint Rose Philippine Duchesne was born in Grenoble, France. When she was 18, she joined the Convent of the Visitation of Saint Marie d’en Haut as a novice. A few years later in 1804, she joined the Society of the Sacred Heart of Jesus as a novice. There, she felt a deep calling to pursue missions; in a letter to Mother Barat, she once wrote:

I spent the entire night in the new World … carrying the Blessed Sacrament to all parts of the land … I had all my sacrifices to offer: a mother, sisters, family, my mountain! When you say to me “now I send you.” I will respond quickly “I go.”

Despite the sense of urgency she felt, Philippine was unable to pursue foreign missions until 12 years later. In 1818, she traveled to St. Charles, Missouri, with five other women to found the first order of the Society of the Sacred Heart outside of France. The mission was not without challenges: Philippine had trouble learning English and interacting with the Native Americans and also faced financial difficulties. She founded the first free school west of the Mississippi that year, and within the decade, founded six houses.

In 1852, Philippine passed away at age 83. She is honored in the Basilica in a statue in Memorial Hall and in the Trinity Dome mosaic. In 1988, Rose Philippine Duchesne became the fourth citizen of the United States to be canonized.

To read about four other saints as mothers and where they are featured in the Basilica, view this post.

Victory Over Sin: Our Lady of Pompei
Basilica to Participate in Nationwide Renewal of Consecration to Mary, Mother of the Church