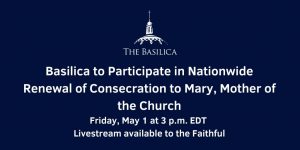 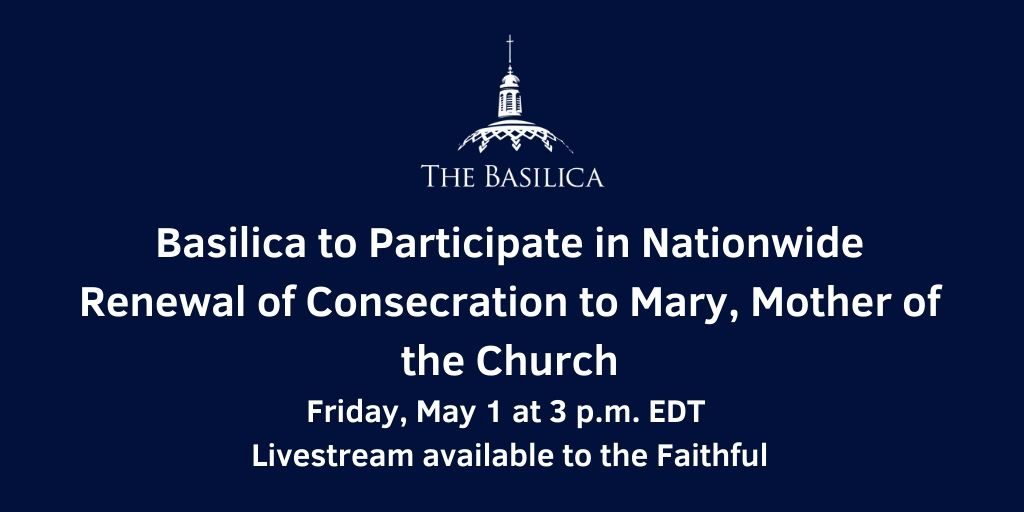 Basilica to Participate in Nationwide Renewal of Consecration to Mary, Mother of the Church

Friday, May 1 at 3 p.m. EDT – Livestream available to the Faithful

The Basilica of the National Shrine of the Immaculate Conception will participate in the nationwide Renewal of the Consecration of the United States to the Blessed Virgin Mary on Friday, May 1, at 3 p.m. EDT.

The Most Rev. Wilton D. Gregory, Archbishop of Washington and Chairman of the National Shrine’s Board of Trustees, will celebrate a brief liturgy and re-consecration of our nation from the Basilica’s Great Upper Church.

Archbishop Gregory will join with the Most Rev. José H. Gomez, Archbishop of Los Angeles and President of the United States Conference of Catholic Bishops, and bishops from across the United States and Canada, who, from their respective dioceses, will seek the intercession of Mary, Mother of the Church, during these unprecedented times of COVID-19.

Monsignor Walter R. Rossi, Rector of the Basilica, states, “I am delighted that the USCCB will join the Canadian Conference of Catholic Bishops in renewing our nations to the care and powerful intercession of the Blessed Virgin Mary as we continue in this coronavirus pandemic.”

He continued, “I am especially pleased that Archbishop Gregory will lead the consecration here at the Basilica of the National Shrine of the Immaculate Conception, as it was here in 1959, on the day the National Shrine was dedicated, that the bishops of the United States held a similar consecration of our country to Our Lady, under her title of the Immaculate Conception.”

Though the Basilica is closed to the public due to the coronavirus pandemic, the faithful will be able to participate via livestream on the Basilica’s website at www.nationalshrine.org/mass, on its YouTube channel, www.youtube.com/MarysShrine, and on its Facebook page, www.facebook.com/nationalshrine.

The Basilica of the National Shrine of the Immaculate Conception is the largest Roman Catholic church in North America and is one of the ten largest churches in the world.  Dedicated to patroness of the United States, the Blessed Virgin Mary under her title of the Immaculate Conception, the Basilica is our nation’s preeminent Marian shrine and patronal church.  The National Shrine, often referred to as America’s Catholic Church, will celebrate the one hundredth anniversary of the placing of its foundation stone on September 23, 2020.

A Tribute to 3 Mothers of the Church
Boldness in the Face of Corruption: St. Catherine of Siena’s Life and Legacy