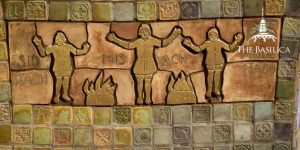 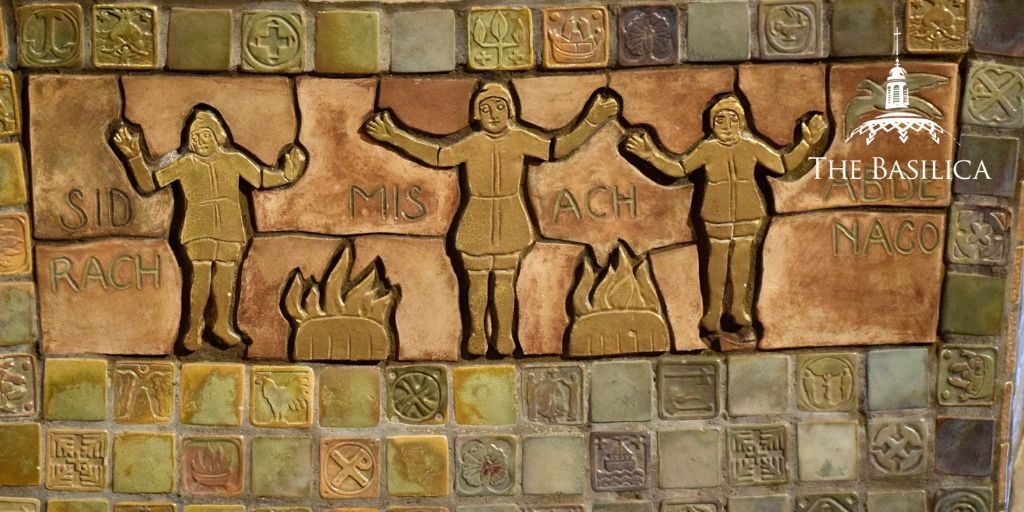 This post is the third installment in the Basilica’s Biblical Figures series, which highlights the stories of the individuals throughout the Scriptures who are portrayed in “America’s Catholic Church.” While some of them inspire us with their unwavering faithfulness, others serve as sober reminders of the consequences of sin. All of them have lessons to teach us about Christian living.

When Israel was under the reign of Nebuchadnezzar, he called into his service young noblemen to be trained in the house of the king for three years. Among them were Daniel, who would ultimately be sent to the lion’s den, and three men called Hananiah, Mishael, and Azariah.  Nebuchadnezzar ordered their names to be changed to assimilate them into Babylonian culture: “Daniel to Belteshazzar, Hananiah to Shadrach, Mishael to Meshach, and Azariah to Abednego.” (Daniel 1:7).

Daniel, however, did not want to “defile himself with the king’s food or drink.” The king’s food may have been meat which had been offered to idols, or meat of which the blood was not drained properly – and therefore, unfit for God’s people to consume. Daniel asked the chief chamberlain, with whom he had favor, to spare him from this food. The chief chamberlain was reluctant to do so, however, as he feared that Daniel would look thin and unhealthy compared to the other young men, for which the chamberlain himself would be punished. In the end, Daniel persuaded him to let him, Shadrach, Meshach, and Abednego try a diet of only vegetables and water for 10 days to see if they appeared any less healthy.

The chief chamberlain agreed, and at the end of the 10 days, the four servants looked even healthier than the other men. Seeing this, he continued to give them only vegetables and water instead of the king’s indicated diet. God also gave each of these young men “knowledge and proficiency in all literature and wisdom,” (Daniel 1:17).

A New Chapter for Nebuchadnezzar

During Nebuchadnezzar’s second year as king, the Lord gave him terrible dreams. When none of his wise men were able to interpret his dreams, he sentenced them to death, and then asked Daniel to tell him what his dream was and interpret it. Daniel asked Shadrach, Meshach, and Abednego to pray that God would reveal it to him – and he did. The king was astounded at Daniel’s wisdom, as Daniel 2:48-29 relates:

He advanced Daniel to a high post, gave him many generous presents, made him ruler of the whole province of Babylon and chief prefect over all the wise men of Babylon. At Daniel’s request the king made Shadrach, Meshach, and Abednego administrators of the province of Babylon, while Daniel himself remained at the king’s court.

However, there were greater trials awaiting them. King Nebuchadnezzar had an enormous gold statue built, which he ordered everyone in the kingdom to worship. Shadrach, Meshach, and Abednego refused to follow the decree, however, and the Chaldeans brought this to the king’s attention. Nebuchadnezzar was infuriated, and immediately had the three men brought before him, as Daniel 3:14-18 relates:

King Nebuchadnezzar questioned them: “Is it true, Shadrach, Meshach, and Abednego, that you will not serve my god, or worship the golden statue that I set up? Now, if you are ready to fall down and worship the statue I made, whenever you hear the sound of the horn, pipe, zither, dulcimer, harp, double-flute, and all the other musical instruments, then all will be well; if not, you shall be instantly cast into the white-hot furnace; and who is the God who can deliver you out of my hands?” Shadrach, Meshach, and Abednego answered King Nebuchadnezzar, “There is no need for us to defend ourselves before you in this matter. If our God, whom we serve, can save us from the white-hot furnace and from your hands, O king, may he save us! But even if he will not, you should know, O king, that we will not serve your god or worship the golden statue which you set up.”

Utterly incensed, Nebuchadnezzar ordered them to be sent into the furnace straightaway, instructing his servants to heat it to seven times its usual temperature. When Shadrach, Meshach, and Abednego were bound and cast into the furnace, they began lifting their voices in praise and prayer to God. The king’s servants continued to stoke the flames, but Shadrach, Meshach, and Abednego remained unharmed, as Daniel 3:47-50 indicates:

The flames rose forty-nine cubits above the furnace, and spread out, burning the Chaldeans that it caught around the furnace. But the angel of the Lord went down into the furnace with Azariah and his companions, drove the fiery flames out of the furnace, and made the inside of the furnace as though a dew-laden breeze were blowing through it. The fire in no way touched them or caused them pain or harm.

Nebuchadnezzar could scarcely believe his eyes: there, in the flames, were four men walking around unharmed, one of which “look[ed] like the son of God.” He opened the furnace and ordered them to come out, and when Shadrach, Meshach, and Abednego emerged from the furnace, it was clear “that the fire had had no power over the bodies of these men; not a hair of their heads had been singed, nor were their garments altered; there was not even a smell of fire about them,” (Daniel 3:92-94).

Amazed at God’s deliverance, Nebuchadnezzar called the Lord blessed, and promoted Shadrach, Meshach, and Abednego. Nebuchadnezzar declared that all in the nation should worship the Lord, “For there is no other God who can rescue like this,” (Daniel 3:96).

Lessons from Shadrach, Meshach, and Abednego

What can we learn from the story of Shadrach, Meshach, and Abednego? These three young men demonstrated complete confidence in the sovereignty of God and were unafraid to stand up to the most powerful ruler in the land. They were willing to accept whatever price they might have to pay for defying the king’s edicts, acknowledging that God may or may not choose to save them:

“There is no need for us to defend ourselves before you in this matter. If our God, whom we serve, can save us from the white-hot furnace and from your hands, O king, may he save us! But even if he will not, you should know, O king, that we will not serve your god or worship the golden statue which you set up.” (Daniel 3:18)

Regardless of the outcome, they were committed to their faith, even when faced with a painful death. Because of their faith, God delivered them from the evil – and in doing so, brought the mighty king of Babylon to recognize his Lordship over heaven and earth.

Faces of the Basilica: A Knight of Columbus Tells His Story
St. Camillus de Lellis: Demonstrating Christ’s Love to the Sick