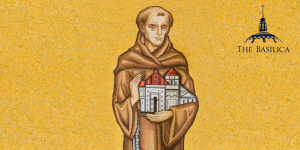 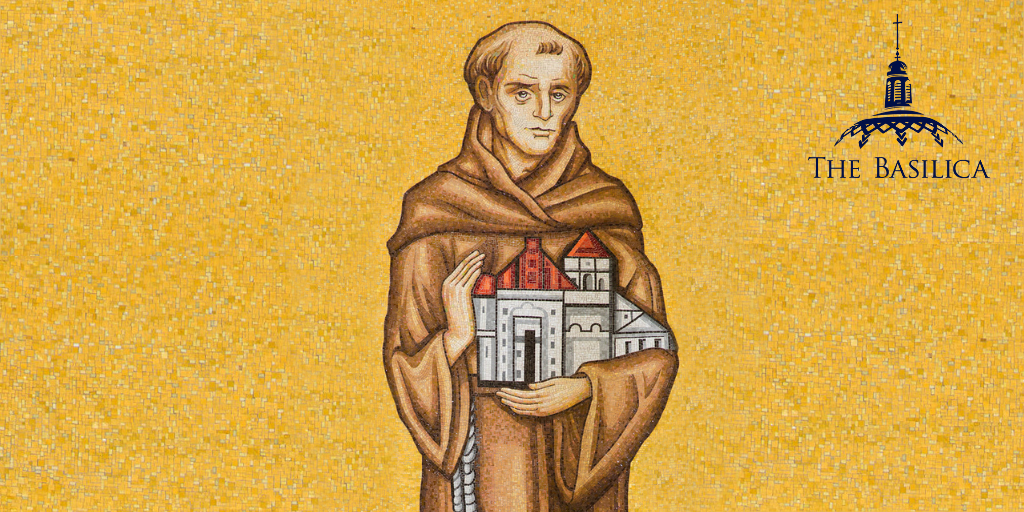 St. Junípero Serra is best known for his work in bringing the Gospel to the Americas. Even though he was plagued by health problems, he didn’t let his pain stop him from trekking hundreds of miles across the continent in his pursuit of evangelization – and today, the missions founded by him stand as a testament to his perseverance. As we celebrate his feast on July 1, we invite you to learn more about him and where you can find him portrayed in the Basilica.

1. St. Junípero Serra came to America 27 years before the Declaration of Independence was signed.

Born in Petra, Majorca, Spain in 1713, Serra joined the Franciscan order at the age of 16 and earned his doctorate at Lullian University before his ministry work brought him to America. He landed with Francisco Palóu in Vera Cruz on December 7, 1749.

After landing in America, he walked 250 miles on foot to Mexico City — and that was only the first of many walking trips. Reportedly, his longest walking trip was from San Diego to Old Mexico City — a distance of over 1,700 miles!

Serra had a vision of missions across the entire California coast, each about a day’s journey apart. He personally founded nine missions, and eventually, 21 missions were established in the California mission system.

4. Serra had a prolific ministry in spite of painful health complications and clashes with bureaucratic leadership.

Throughout the course of his life, Junípero Serra suffered from an ulcerated leg that sometimes became so painful he could hardly walk. He also struggled with asthma after 1758. However, his zeal for spreading the Gospel helped him overcome physical setbacks that would have been a great hinderance to others.

Serra constantly clashed with the Spanish government, who prioritized Spanish presence over Gospel mission. Serra often stood up for the native peoples when the Spanish disregarded their interests, including in a struggle over the valley of Tancama. He learned the Otomí language and taught both religious truths and agricultural skills with care and passion.

5. Serra was canonized at the Basilica.

The journey to sainthood for Junípero Serra was a long one. The cause for his beatification began in the Diocese of Monterey-Fresno in 1934, 150 years after his death. In 1988, he was beatified by Pope John Paul II. Finally, he was canonized at the Basilica of the National Shrine of the Immaculate Conception in 2015 by Pope Francis – the first canonization to ever take place on American soil.

As Pope Francis said at Canonization of Junípero Serra:

“[Junípero Serra] was the embodiment of “a Church which goes forth,” a Church which sets out to bring everywhere the reconciling tenderness of God…He was excited about blazing trails, going forth to meet many people, learning and valuing their particular customs and ways of life. He learned how to bring to birth and nurture God’s life in the faces of everyone he met; he made them his brothers and sisters.

Father Serra had a motto which inspired his life and work, not just a saying, but above all a reality which shaped the way he lived: siempre adelante! Keep moving forward! For him, this was the way to continue experiencing the joy of the Gospel, to keep his heart from growing numb, from being anesthetized. He kept moving forward, because the Lord was waiting. He kept going, because his brothers and sisters were waiting. He kept going forward to the end of his life.”

You can find St. Junípero Serra portrayed in the Basilica in a statue outside the east portico, in a mosaic in the east portico tympanum; in a sacristy window in the Great Upper Church, and in the Trinity Dome mosaic.

“The Cause of Junípero Serra,” Dr. Geraldine Rohling.

What is Omniscience?
A hairdresser for Christ: the extraordinary life of Pierre Toussaint