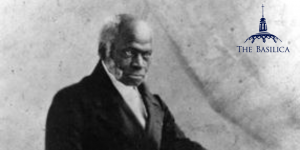 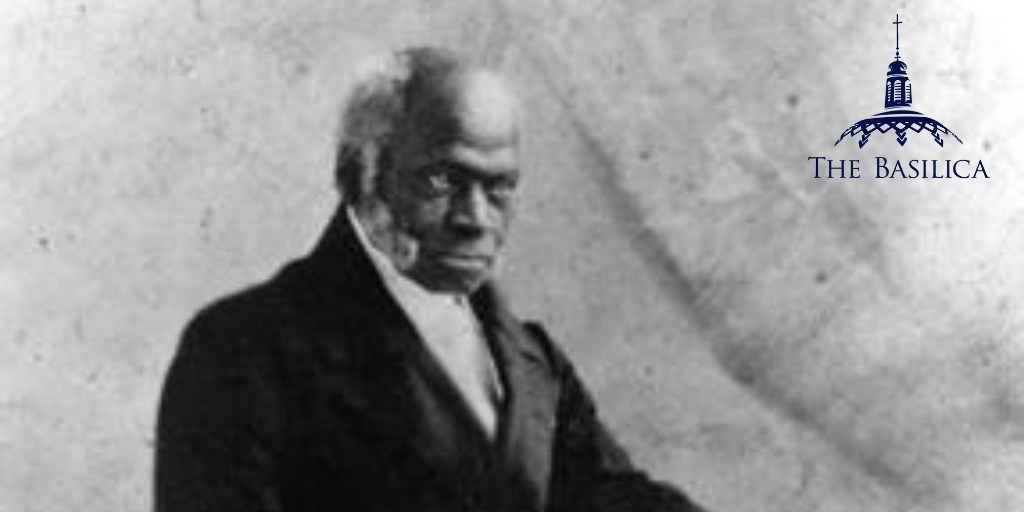 Many people associate holiness with missionaries and teachers or monks and philosophers. But Christians don’t need to be in specifically religious vocations to be used by God – just consider the Venerable Pierre Toussaint. A former slave who was New York’s premier hairdresser at the turn of the 19th century, he became a generous philanthropist and servant of the poor, touching the lives of countless individuals with his kindness, love, and charity. As we mark the anniversary of his birthday this month, we invite you to learn more about his extraordinary life and learn where he is portrayed in the Basilica. 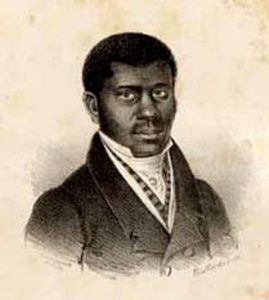 The descendant of African slaves, Pierre Toussaint was born in Haiti in 1766. When Pierre was in his twenties, the wealthy Bérard family, who owned a plantation there, brought Pierre and some of his family members to New York after a rebellion started amongst the enslaved. The plantation was burned to the ground in the unrest – deciding Pierre’s fate to remain in New York thereafter.

But Pierre’s experience was far from typical. Not only did he learn to read and write as a child, but in New York he trained to be a hairdresser, and soon distinguished himself as the premier hairdresser in the state. He could coax hair into intricacies of curls and ribbons and all manner of fanciful styles of the time. His sympathetic listening abilities and strong character also won him the affection and trust of countless clients, who were in awe of his staunch refusal to share gossip.

When the head of the family, Monsieur Bérard, passed away, Pierre assumed responsibility not only for himself, but for Madame Bérard and the other slaves of the household, working 16-hour days styling hair to support them. Upon her death in 1807, Madame Bérard freed him – and without the household demands weighing upon him, he could marry the woman he loved, Marie Rose Juliette. He purchased her freedom and the two were wed in 1811. 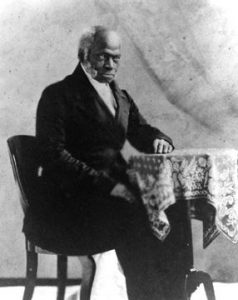 Throughout his life, Pierre demonstrated profound charity and kindness to all those around him. Not only did he generously donate to the poor and orphans, but he personally cared for them. As the dreaded yellow fever tore through impoverished communities, many of the sick were left abandoned. Family members were sometimes too afraid to risk endangering their own health to care for their loved ones, but that didn’t stop Pierre. He visited the sick, or even brought some of them into his home to better care for them.

Pierre supported anyone in need, regardless of their race. When Mother Elizabeth Ann Seton founded an orphanage in 1817, he gave much of his own money to support it – despite the fact that it only supported white children. He and Juliette were also instrumental in establishing New York’s first Catholic school for black children and supported the Oblate Sisters of Providence, the first community of black religious, and their orphanage. And when Pierre’s niece Euphémie was left an orphan, Pierre and Juliette adopted her and raised her as their own. 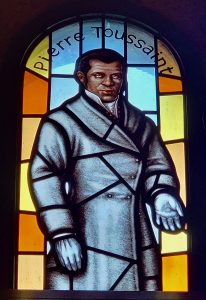 Pierre attended Mass daily at St. Peter’s Church in Lower Manhattan – which was also Elizabeth Ann Seton’s parish – and was well-known and loved in his community for his service. Even with the prejudices that existed against blacks at the time, upon his death in 1853, Pierre was praised by the newspapers as a man of outstanding character and virtue. That the death of a black man should be noted at all by the newspapers of the era was extraordinary already – to be further memorialized with such warmth and affection was even more unheard of. Such was the testament of Pierre’s profound love and charity.

However, it wasn’t until 1991 that the process for Toussaint’s beatification commenced. Cardinal John O’Connor initiated the effort and also arranged the exhumation and reinterment of Toussaint’s body to the new location of St. Patrick’s Cathedral, where Toussaint received the high honor of becoming the first layman to be buried below the main altar in the crypt. He was declared Venerable by Pope John Paul II in 1996.

You can find Ven. Pierre Toussaint portrayed in the Basilica in the lower sacristy window of the Crypt Church (pictured right).

“10 fascinating facts about Pierre Toussaint, a former slave on the road to sainthood.” CNA.