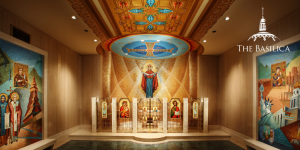 Dedicated to and named after the Blessed Virgin Mary, the Basilica of the National Shrine of the Immaculate Conception is comprised of over 80 chapels and oratories, more than half of which are explicitly devoted to portraying the roles Our Lady has taken on throughout history and culture.

Today we look at three Marian chapels and accompanying prayers featured at the Basilica. May your faith be strengthened as you turn to the Mother of God for her intercession, protection, and hope.

Pokrov: Holy Protection of the Theotokos

Featuring a larger-than-life mosaic of the ‘Holy Protection’ the Byzantine-Ruthenian Eastern Rite Chapel at the Basilica recalls the intervention of the Blessed Mother in the year 626 A.D. during the siege of Constantinople. Fearing for their lives, the entire population gathered at the Church of Blachernae, which preserved the famous icon of the ‘Holy Protection’. During an all-night vigil, they implored her intercession to save them from the hands of their enemies. According to eyewitness accounts, the Blessed Virgin appeared to those gathered in the church, sheltering them under her veil throughout the siege.

Prayer to Our Lady, Holy Protection of the Theotokos

In remembrance of this miraculous event, let us turn to Our Lady, Holy Protection of the Theotokos, and ask that she intercede for us as she did for the population of Constantinople, all those years ago:

‘O Mary, Mother of God, as you are above all creatures in heaven and on earth, more glorious than the Cherubim, more noble than any here below, Christ has given you to His people, firm bulwark and protectress, to shield and save sinners who fly to you. Therefore, O Lady, all-embracing refuge, we solemnly recall your sweet protection and beg the Christ forever for His mercy. Amen.’

Our Lady, Queen of Ireland

Another beautiful tribute to the care of the Blessed Mother is the chapel of Our Lady, Queen of Ireland, the focal point of which is a life-sized carving of Our Lady, holding the Holy Child, while seated on a hexagonal rock, representative of the Giant’s Causeway (the basalt columns which protrude out of the sea along the coast of Northern Ireland). Named the “Protectress of Ireland” in 1642, her motherly protection has been invoked many times during the conflict-filled history of the Irish, from the sieges of British troops to the Great Potato Famine, always with great success.

Prayer to Our Lady, Queen of Ireland

Imitating the powerful cultural devotion that the Irish have to the Blessed Mother, let us pray:

‘Holy Mary, if thou wilt, hear thy supplicant; I put myself under the shelter of thy shield. When falling in the slippery path, thou art my smooth supporting hand staff. There is no hound in fleetness or in chase, north wind or rapid river, as quick as the Mother of Christ to the bed of death, to those who are entitled to her kindly protection. Amen.’

Our Lady, Queen of Hope

The chapel of Our Lady of Hope pays special homage to Our Blessed Mother’s appearance in France during the Franco-Prussian War, featuring a bronze statue of Mary and two angels, hovering in a protective manner over the altar. On January 17, 1871, Our Lady appeared to six children in the village of Pontmain, France, a central location at that time of the war. As troops marched closer, she instructed the children and townspeople to pray fervently, assuring that if they did so, the conflict would end. The town gathered at the site of the apparition and prayed as instructed. Only three days later, the Prussian troops withdrew and within a week the war ended. All men from Pontmain who enlisted in the war returned home safely.

Prayer to Our Lady, Queen of Hope

With the same faith as the villagers of Pontmain, we can offer a prayer of intercession to Our Lady, Queen of Hope:

‘O Mary, my Mother, I kneel before you with heavy heart. The burden of my sins oppresses me. The knowledge of my weakness discourages me. I am beset by fear and temptation of every sort. Yet I am so attached to the things of this world that instead of longing for Heaven I am filled with dread at the thought of death.

O Mother of Mercy, have pity on me in my distress. You are all-powerful with your Divine Son. He can refuse no request of your Immaculate Heart. Show yourself a true Mother to me by being my advocate before His throne. O Refuge of Sinners and Hope of Hopeless, to whom shall I turn if not you?

Obtain for me, then, O Mother of Hope, the grace of true sorrow for my sins, the gift of perfect resignation to God’s Holy Will, and the courage to take up my cross and follow Jesus.

But above all I pray, O dearest Mother, that through your most powerful intercession, my heart may be filled with Holy Hope, so that in life’s darkest hour I may never fail to trust in God my Saviour, but by walking in the way of His commandments I may merit to be united with Him, and with you in the eternal joys of Heaven. Amen.’

A Week in Rome with the Choir of the Basilica
Prayer, Peace, and Penance: The Message of Our Lady of Fatima