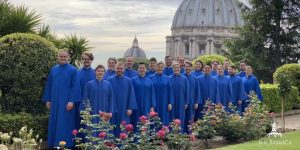 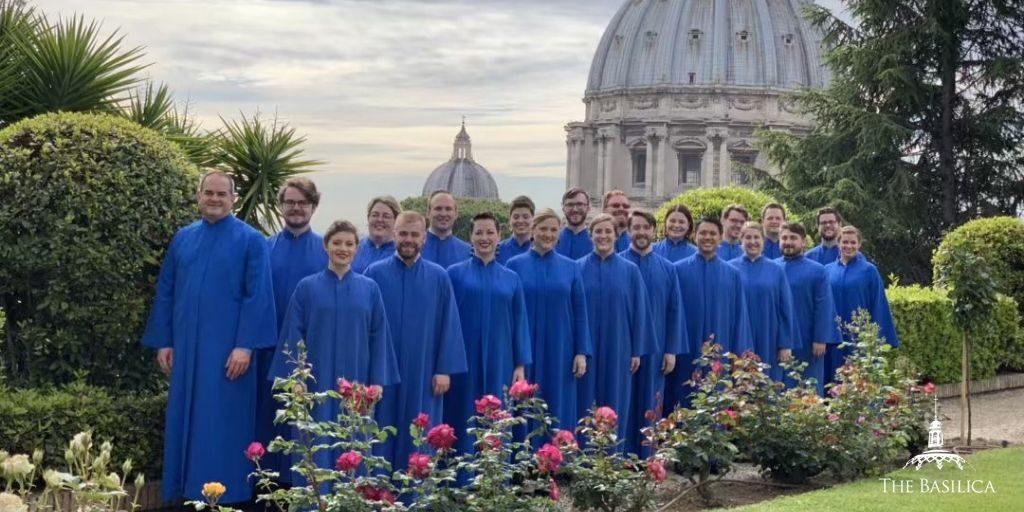 The Choir of the Basilica performed this month in Rome, traveling to the Eternal City to honor the 35th anniversary of formal diplomatic relations between the United States and the Holy See. Experience the week-long musical pilgrimage through the journal of Sara, a soprano in the Basilica choir.

Walking into the Shrine’s choir rehearsal room and seeing it filled with suitcases and backpacks, I knew it was anything but an ordinary Sunday. This was the day the Choir of the Basilica would depart for a week-long musical pilgrimage to Rome. I was particularly excited having recalled my last trip to Rome with the choir. It was in 2016 when I made the decision to become a Catholic, and my husband Kyle (who is a tenor in the choir), proposed to me in view of St. Peter’s Basilica. Returning to Rome today as a now-married, still-new Catholic was incredibly significant to me.

When I joined the choir several years ago, I was not yet a Catholic, but found the sacred Liturgy, particularly at the Shrine, very inspiring. The trip to Rome that year solidified my desire to enter the Church – pretty much everything about our experience there made me realize that I would find my home in the Catholic faith. I was received into the Church along with another friend from the choir (one who had a similar experience on the trip) on Laetare Sunday in 2017.

Not long after we arrived, we walked over to Sacro Cuore del Suffragio in the Prati neighborhood for our opening Mass. The Mass was celebrated by Msgr. Rossi, Rector of the Basilica. His homily spoke of the impact the Choir of the Basilica has on the spiritual life of the Shrine. The choir then gathered for a welcome dinner at a local trattoria.

Our day began with an early morning rehearsal at San Antonio dei Portughese where we were to perform a concert later that week. Following the rehearsal, we were greeted by a small crew from the EWTN Bureau in Rome, who decided to do a feature story on our visit to Rome. After a brief lunch, we boarded the bus to head to the Papal Basilica of Saint Paul’s outside the Walls. It was in this magnificent basilica where we sang for a Mass of Thanksgiving to mark the 35th anniversary of official diplomatic relations between the United States and the Holy See. The Mass was celebrated by His Eminence James Cardinal Harvey, Archpriest of the Basilica, along with other cardinals and several concelebrating priests. This year, there are many events planned to celebrate this 35th anniversary; we were honored to participate in the Mass to mark this significant occasion. 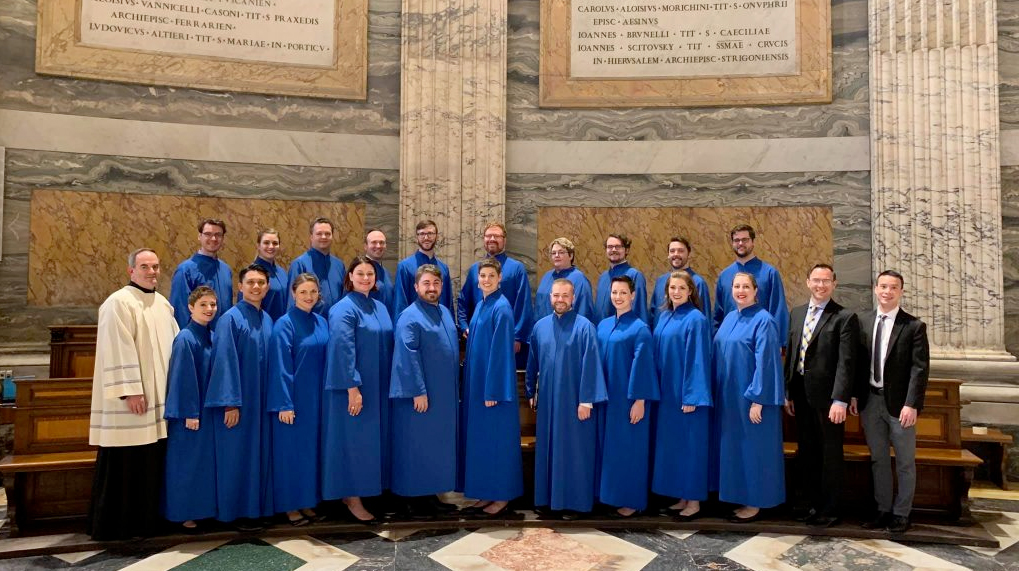 Early morning, we again walked to Sacro Cuore del Suffragio for Mass. Sacro Cuore is not one of the most visited Churches in Rome, but is significant because it is one of the few churches in the city built in the Gothic style. It resembles the cathedral in Milan and is therefore referred to as “Little Duomo di Milano”. The acoustics were just incredible – many walked in from off the street having heard our sounds emanating through the doors.

That evening we headed to the Basilica di Santa Maria sopra Minerva for our first choral concert of the week. This concert was hosted by the United Stated Embassy to the Holy See as part of the 35th anniversary celebrations. The concert began with a welcome by Her Excellency, Callista Gingrich, U.S. Ambassador to the Holy See. Every pew was filled, and we were so excited to sing for an audience that included many members of the diplomatic community, friends in Rome, and visitors to the Eternal City.

We enjoyed a free day today. Many of us took the opportunity to visit St. Peter’s Basilica and some even climbed to the top of the cupola. The view from that vantage point was worth the many steps to the top. That evening we enjoyed a dinner hosted by our director, Peter Latona, affectionately referred to as “Coach.” “Pasta Carbonara with Coach” will now become a Rome tradition.

Many of us (myself included) grumbled about having a very early call time. However, the mood changed dramatically once we reached our destination. We arrived at the Vatican’s Porta Sant’Ufficio, where we were screened by the Swiss guards and made our way to the top of the beautiful Vatican Gardens. We were there to sing for the dedication of a new statue in a picturesque rose garden located beside the Vatican Radio tower with St. Peter’s Dome (designed by Michelangelo) in the background. Pope Benedict’s residence was just off to the side and we all wondered if he might hear our singing. The statue is of the image of Mater Ecclesiae. We all felt very privileged to be part of the historic service there that morning. 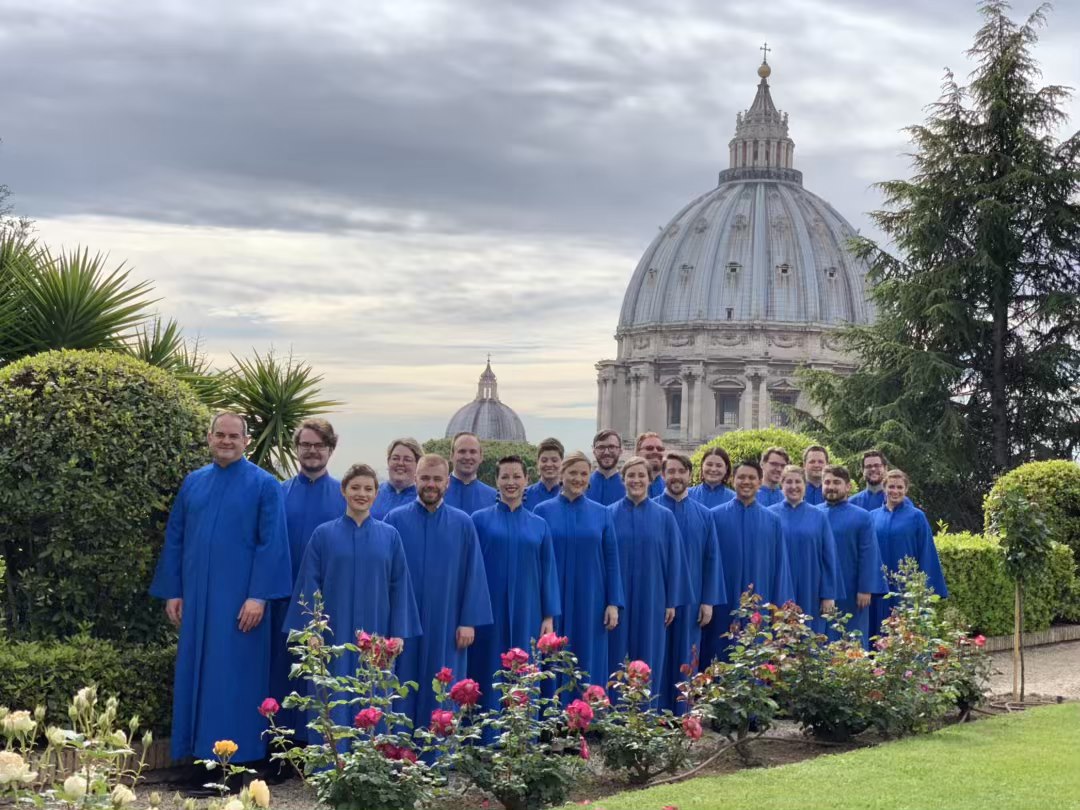 After the Rite of Blessing, we attended a reception in our honor at Villa Richardson, the residence of Ambassador Gingrich. In her words of welcome, the Ambassador referred to us as “spiritual ambassadors.” This rang true for me: as special as it is to see and experience all that the Eternal City has to offer, it is equally significant for me, as a member of the Choir of the Basilica, to share what we do at our own Basilica with the people in Rome.

Jesus told the Apostles to “go into all the world and proclaim the Gospel.” I believe that in our own way, the Choir of the Basilica does that every week, and in doing so, helps the people we encounter to draw closer in their relationship to our Lord.

The Memorial Mass: A Recognition of Love and Service
3 Marian Prayers of Protection & Hope