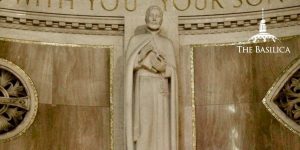 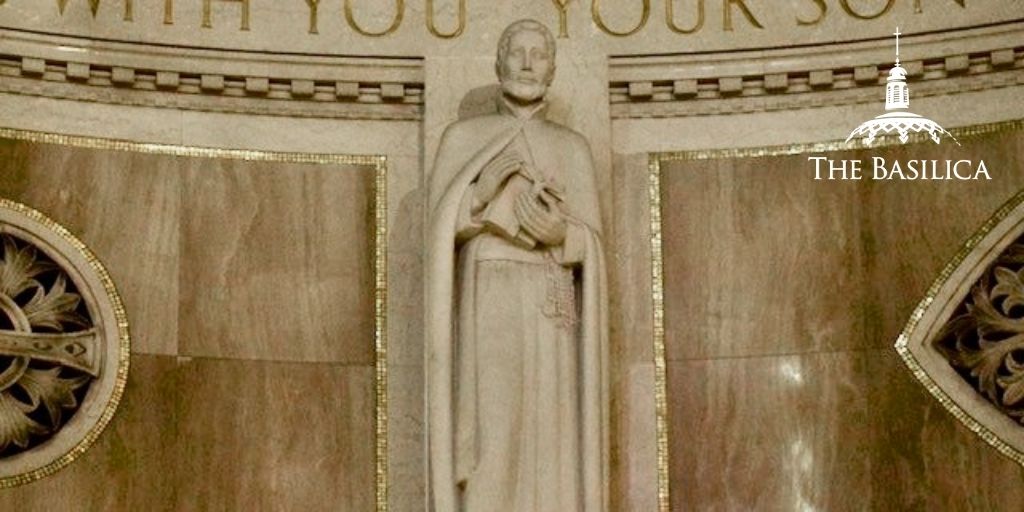 On December 3, we celebrate the feast of St. Francis Xavier, the patron saint of missions. His steadfast perseverance was rivaled only by his ingenuity in reaching unbelievers with the Gospel – whether it be through setting Scripture to pop tunes or dressing like a noble. He is portrayed in the Basilica in the west portico and in a Trani marble statue in the Upper Church.

Born in 1506, Francis studied at the University of Paris alongside Saint Ignatius of Loyola, and became one of the founding members of the Society of Jesus. To help fulfill the Society’s aim of sending missionaries into foreign lands, Francis departed for Goa in 1541. Unfortunately, Francis suffered from severe seasickness, making the thirteen-month voyage an arduous journey.

Though Christianity was somewhat established in Goa, Francis soon discovered that many of those who claimed the name of Christ lived in shameless hedonism. Mistreatment of slaves and women, and a disregard for the impoverished characterized the lives of these nominal Christians. Francis determined to inspire true holiness not only through his personal conduct, but through unconventional practices. To make the Gospel accessible to the lower classes, he set verses to popular tunes of the era, and soon, the Scriptures were being sung across the region. He also ministered to unbelievers through humanitarian work, assisting in the leper community, hospitals, and prisons. Francis later ventured beyond Goa to the surrounding areas, where he tried to assimilate to the indigenous culture as much as possible, dressing like a pauper so that he could better relate to the locals.

After a few years in India, Francis felt called to continue his mission work in Japan alongside a small group of fellow Catholics. While assimilation once again helped him better reach people, the task looked very different in Japan. Instead of dressing humbly like he did in Goa, Francis found that more people were interested in speaking with him if he appeared wealthy and important. So, he dressed in fine robes and had his fellow missionaries pretend to be his attendants. Francis was quickly accepted into Japanese society, where local officials liked him so much that they permitted him to freely hold services in an unused Buddhist temple. After just two years, Francis had helped lead nearly 2,000 people to Christ, and planted the seeds of a ministry that would continue to flourish as other missionaries came to serve in Japan.

In 1552, Francis felt God calling him to minister to the Chinese. At that time, China’s borders were closed to immigrants, so he hired a captain to sail him there in secret. Francis fell ill on the journey and had to stop on an island located six miles off the mainland’s coast, where he succumbed to a fever and passed away before beginning his new ministry.