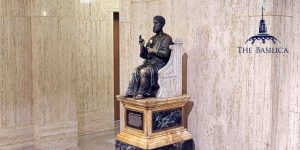 “Grant, we pray, almighty God,
that no tempests may disturb us, for you have set us fast
on the rock of the Apostle Peter’s confession of faith.
Through our Lord Jesus Christ, your Son
Who lives and reigns with you in the unity of the Holy Spirit,
one God, forever and ever.” – Roman Missal

On February 22, we observe the Feast of the Chair of Saint Peter, celebrating the doctrine that “Christ the Lord… made Peter and his successors His vicars, to exercise forever in the Church the power which He exercised during His mortal life.”

Here in the Basilica, visitors can view an exact copy in miniature of the original sculpture of the Chair of Saint Peter which resides in St. Peter’s Basilica in Vatican City. Cast in bronze, the Chair of Saint Peter is located on the Crypt level. The founder of the National Shrine, Bishop Shahan, obtained this statue for America’s Catholic Church while in Rome in 1925. It has been displayed in the National Shrine since its arrival on January 1, 1926.

The Rock Upon which the Church is Built

The doctrine of apostolic succession is based on the words of Jesus to Peter in the book of Matthew:

And so I say to you, you are Peter, and upon this rock I will build my church, and the gates of the netherworld shall not prevail against it. I will give you the keys to the kingdom of heaven. Whatever you bind on earth shall be bound in heaven; and whatever you loose on earth shall be loosed in heaven.” – Matthew 16:18-19

In following the tradition of apostolic succession, the Church seeks to foster unity amongst its members upon the foundation of primatial authority beginning with Saint Peter. Pope Leo XIII related in the Encyclical Satis Cognitum:

[I]t is clear that by the will and command of God the Church rests upon St. Peter, just as a building rests on its foundation. Now the proper nature of a foundation is to be a principle of cohesion for the various parts of the building. It must be the necessary condition of stability and strength. Remove it and the whole building falls. It is consequently the office of St. Peter to support the Church, and to guard it in all its strength and indestructible unity.

Just as Christ, the Good Shepherd, lived selflessly during his time on earth, the pope also is called to a vocation of self-sacrifice for the flock which he guides. As Pope John Paul II expressed:

On the feast of the Chair of St Peter, the liturgy once again offers us the famous oracle of the prophet Ezekiel, in which God reveals himself as the Shepherd of his people. Indeed, the chair is inseparable from the pastoral staff, because Christ, Teacher and Lord, came to us as the Good Shepherd (cf. Jn 10: 1-18)…

In honor of Our Holy Father, Pope Francis, we invite you to light a candle today at the Basilica. Vigil candles burn in the chapels throughout the Upper Church and lower crypt level of the National Shrine. Each candle represents the faith of the supplicants and their fervent prayers entrusted to the intercession of the Blessed Mother.