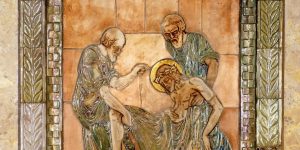 As the Basilica observes Lent, an important practice of the season is the custom of 40 Hours Devotion. In 40 Hours Devotion, the consecrated Eucharist is exposed on the altar in a monstrance for adoration for 40 hours. The tradition is tied to repentance, and usually observed during Lent or Advent. As practiced at the Basilica, the devotion is often broken up over a period of three days, with an opening Mass and closing Mass on the first and third days.

The practice of 40 Hours Devotion dates to as early as 1527, introduced by St. Anthony Mary Zaccaria in Milan and Vicenza, and spread by St. Ignatius and the Jesuits.

When the Archdiocese of Milan asked for an indulgence for 40 Hours Devotion in 1539, Pope Paul III replied:

“Since our beloved son the Vicar General of the Archbishop of Milan, at the prayer of the inhabitants of the said city, in order to appease the anger of God provoked by the offenses of Christians, and in order to bring to nought the efforts and machinations of the Turks who are pressing forward to the destruction of Christendom, amongst other pious practices, has established a round of prayers and supplications to be offered by day and night by all the faithful of Christ, before our Lord’s Most Sacred Body, in all the churches of the said city, in such a manner that these prayers and supplication are made by the faithful themselves relieving each other in relays for forty hours continuously in each church in succession, according to the order determined by the Vicar… We approving in our Lord so pious an institution, grant and remit.”

“We have determined to establish publicly in this Mother City of Rome an uninterrupted course of prayer in such ways that in the different churches, on appointed days, there be observed the pious and salutary devotion of the Forty Hours, with such an arrangement of churches and times that, at every hour of the day and night, the whole year round the incense of prayer shall ascend without intermission before the face of the Lord.”

40 Hours in the United States

St. John Neumann was the first church leader in America to practice the devotion. At the time, Catholics faced great opposition in his home city of Philadelphia during the Know-Nothing Riots of 1844. Anti-Catholic protesters burned two churches and continued to foster animosity towards the Catholics in the city.

Bishop Neumann wanted to institute 40 Hours Devotion, but some of the priests in the diocese were hesitant, believing that it might fan the flames of anti-Catholic sentiment and even result in the desecration of the Eucharist. Neumann was working late into the night when he fell asleep at his desk with his candle still lit. As he slept, the candle burnt down and caught the papers on his desk. Miraculously, he awoke before a large fire broke out — and the papers, though charred, were still readable.

Neumann thanked God for His protection and the Lord spoke to him, telling him to not fear about having the devotion. The first was held in St. Philip Neri Parish, and then expanded throughout the diocese and beyond, being approved for all American dioceses in 1866.

The Basilica is honored to carry on the tradition of 40 Hours Devotion, providing the faithful an opportunity to draw close to the Lord in prayer during Lent, honoring the Lamb who takes away the sins of the world and enables us to have communion with God. We would love for you to join us.

“40 Hours Devotion: Spending personal time with the Lord” from Aleteia.

“What Is the 40 Hours Devotion?” from Catholic Straight Answers.

Download the Spring-Summer 2022 Edition of the Mary’s Shrine Newsletter
St. Cyril of Jerusalem: A Peaceful Soul