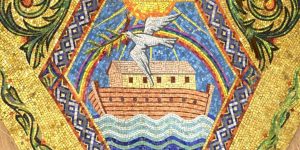 In the early Old Testament, Adam and Eve’s descendants became extremely wicked, and God’s heart was filled with grief and regret for creating them. He declared that he would destroy every living creature on earth – both human and animal alike.

Yet there was one man who found favor with God: Noah, who was a “righteous man and blameless in his generation,” (Genesis 6:9). God told Noah of his plans to destroy the earth, saying:

Make yourself an ark of gopherwood, equip the ark with various compartments, and cover it inside and out with pitch. This is how you shall build it: the length of the ark will be three hundred cubits, its width fifty cubits, and its height thirty cubits. Make an opening for daylight and finish the ark a cubit above it. Put the ark’s entrance on its side; you will make it with bottom, second and third decks. I, on my part, am about to bring the flood waters on the earth, to destroy all creatures under the sky in which there is the breath of life; everything on earth shall perish. I will establish my covenant with you. You shall go into the ark, you and your sons, your wife and your sons’ wives with you. Of all living creatures you shall bring two of every kind into the ark, one male and one female, to keep them alive along with you. Of every kind of bird, of every kind of animal, and of every kind of thing that crawls on the ground, two of each will come to you, that you may keep them alive. Moreover, you are to provide yourself with all the food that is to be eaten, and store it away, that it may serve as provisions for you and for them. (Genesis 6:14-21)

Noah did as God commanded, and when he was 600 years old, he completed the ark. He took his family into it, as well as pairs of all the different animals, two by two. Seven days later, the flood came upon the earth and the rain poured from the skies for forty days and forty nights. The waters rose higher and higher on the face of the earth, until even the tops of the highest mountains were covered and every breathing creature perished (7:22).

After 150 days, the Lord brought a great wind over the earth, causing the waters to subside, and the ark came to rest on top of Mt. Ararat. Noah released a dove:

Then he released a dove, to see if the waters had lessened on the earth. But the dove could find no place to perch, and it returned to him in the ark, for there was water over all the earth. Putting out his hand, he caught the dove and drew it back to him inside the ark. He waited yet seven days more and again released the dove from the ark. In the evening the dove came back to him, and there in its bill was a plucked-off olive leaf! So Noah knew that the waters had diminished on the earth. He waited yet another seven days and then released the dove; but this time it did not come back. (Genesis 8:7-12)

When the dove did not return, Noah opened the covering of the ark and saw that the waters had dried up from the ground. God instructed him to bring his family and all the creatures out of the ark.

What was the first thing Noah did upon exiting the ark? He built an altar to God and presented him with an offering, giving thanks to him for his provision. And God made a promise never to flood the earth again, setting a rainbow in the sky as a sign of this covenant with mankind.

What We Can Learn from Noah

The story of Noah and the Flood is one of judgement and salvation; of obedience and disobedience. In an era of overwhelming wickedness, Noah set himself apart by living righteously. Noah was likely mocked for building a giant boat when no flood was yet seen upon the earth – but he did not worry about what other people thought. He simply responded to God’s commands with a willing heart and hands. God rewarded him for his righteousness and obedience, saving both him and his family from destruction.

The story of the Flood also demonstrates both the gravity of God’s justice and the promise of His salvation. Every sin we commit grieves God, and His justice demands judgement for that sin. Just as God provided salvation for Noah and his family when His judgement was brought upon the world, so also does God provide salvation for each of His followers through Christ.

This post is the sixth installment in the Basilica’s Biblical Figures series, which highlights the stories of the individuals throughout the Scriptures who are portrayed in “America’s Catholic Church.” While some of them inspire us with their unwavering faithfulness, others serve as sober reminders of the consequences of sin. All of them have lessons to teach us about Christian living.

A Guide to the Joyful Mysteries
The National Shrine Christmas Collection