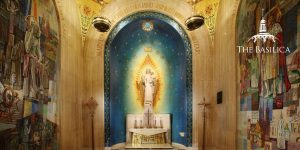 Origin of Our Lady of Šiluva

In 1457, a nobleman named Petras Gedgaudas built a church in Šiluva in honor of the feast of the Nativity of the Blessed Mary, bringing an icon from Rome for the church. It became a place of pilgrimage for many, with crowds of the faithful from all over the country and neighboring Prussia coming to celebrate the Nativity of Mary.

However, as the Protestant Reformation spread throughout Europe, much of Šiluva became Calvinist and the remaining Catholics faced severe opposition from the government. As a result, the church was closed, fell into disuse, and the building later burned down. The remaining parish priest, Father John Holubka, buried the icon of the Blessed Mother, along with other surviving valuables and documents, in an iron box on the church property in 1569 in an effort to keep them safe. Later, a group of Catholics tried to reclaim the church property through legal proceedings, but this proved difficult, as all ownership documents had been lost.

In 1608, a group of shepherd children reported that they had seen a beautiful woman crying while holding a child at the site of the old church. The children returned the following day with others from the village, including a Calvinist minister, all of whom recognized the woman as the Blessed Mother holding Baby Jesus. An old man, who had aided the Father Holbka in burying the iron box, heard of the apparition and remembered exactly where they had dug. Thanks to this discovery, the Catholic Church was finally able to regain the legal rights to the property in 1622.

Initially, the faithful of Šiluva rebuilt a small wooden chapel on the land, but it soon proved too small for the numerous pilgrims who came to worship, and a larger church was built in 1641.

Another site frequently associated with the Catholic faith in Lithuania is the Hill of Crosses, which served as a symbol of the endurance and peaceful resistance of the Lithuanian people. Since the 19th century, pilgrims have visited the Hill, leaving behind crosses, rosaries, and other devotional items as a monument to their faith. During the Soviet occupation, the site was bulldozed at least three times, but each time, the faithful returned to erect more crosses. Current estimates put the number of crosses at 100,000, with new ones being added each day.

Honoring Our Lady of Šiluva at the Basilica

Dedicated on September 4, 1966, the chapel to Our Lady of Šiluva at the Basilica features a Trani marble statue of Our Lady and the Infant Jesus in native dress, created by Lithuanian sculptor Vytautas Kašuba. Pinecones and boughs, a symbol of Šiluva, are also found throughout the chapel, while the altar frontal depicts the Hill of Crosses. Mosaics reminiscent of the fabric art of Lithuania line the side walls of the chapel, displaying images of Saint Casamir and the sufferings of the Lithuanian people, relating them to the sufferings of Christ.

Virtually Tour the Our Lady of Šiluva Chapel

Explore the artwork in the Our Lady of Šiluva chapel below in stunning 360°.

Prayer to Our Lady of Šiluva

As you consider the history of the devotion of Our Lady of Šiluva, we invite you to reflect on this prayer:

“O most Holy Virgin Mary, you who appeared to the shepherds in the fields at Šiluva, you whose tears bathed the rock where once an altar stood, you who with plaintive voice said:

‘You plow and sow seed here where formerly my Son was honored,’ grant that we, moved by your tears, may once, as our Forefathers did, revive the spirit of adoration of your Son in our fallow hearts, strengthen the tottering structure of the shrine which is the family and seek forgiveness for the negligence and sins of our nation.

O Mother of God, we desire to raise up the glory of your revelation from forgotten ruins, that we may all the more honor you the patroness of our country, and, with your help, obtain for our nation the spirit of a living Faith. Through Christ our Lord. Amen.”

Lessons in Holiness: A Reflection on the Life of Mother Teresa from Msgr. Rossi
A Guide to the Papal Exhibit