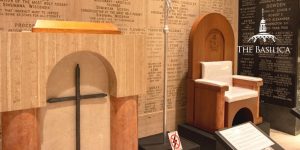 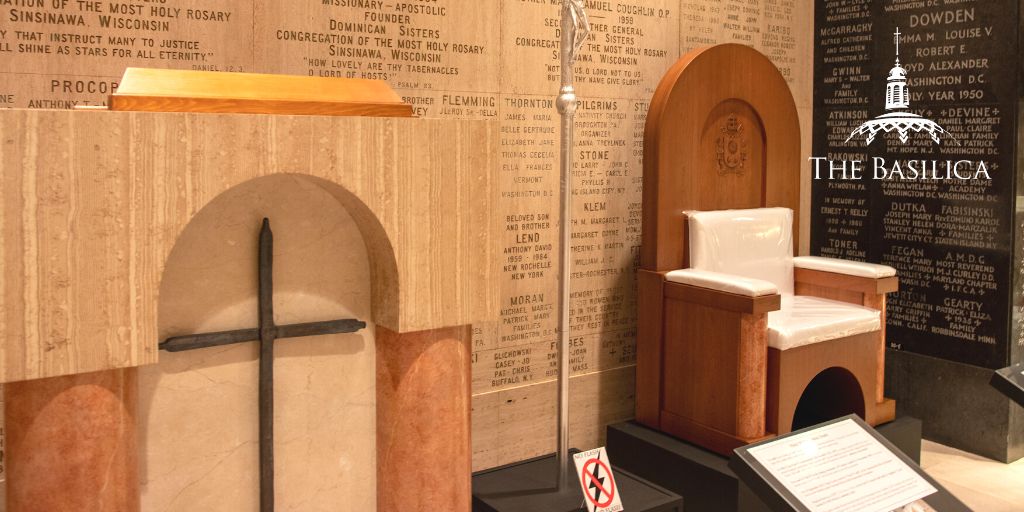 Did you know the lower level of the Basilica houses a papal exhibit with special items connected to the Roman Pontiffs? Over the past 40 years, three different popes have come to America’s Catholic Church and graced it with gifts or used special items during their visits. In today’s post, we invite you to learn more about this exhibit at the Basilica and the relationships between popes and the Basilica.

Not only was Pope John Paul II the first pope to visit the Basilica on October 7, 1979, but he had also privately visited the Basilica years prior before he had ascended the See of Peter. Though the exhibit does not include items specifically connected to his visits to the National Shrine, it does house a papal chair used by him on World Youth Day in 1993 in Denver, Colorado. The light oak chair was built by Freeman Decorating Co. and donated to the Basilica by the USCCB.

Also on display in the exhibit is a papal chair used by Pope Benedict XVI for Vespers during his birthday visit on April 16, 2008. It was constructed using a method called lock-mitering, without any screws or nails, and includes silk and wool ivory damask cushions imported from Belgium, with a hand-embroidered papal crest.

On this visit, Pope Benedict gifted the National Shrine with a Papal Golden Rose as a symbol of papal affection, inspired by Isaiah 11:1:

“But a shoot shall sprout from the stump of Jesse,

and from his roots a bud shall blossom.”

On September 23, 2015, Pope Francis came to the Basilica for the very first time. But that wasn’t all that made his visit special; he also presided over the canonization Mass of Junípero Serra, the first canonization to take place on U.S. soil. The exhibit contains the chair, ambo, and altar used for the occasion, designed by students of the Catholic University of America School of Architecture, Ariadne Cerritelli, Matthew Hoffman, and Joseph Taylor. The ambo contains a ¾ scale copy of an iron cross used by settlers that came from England to Maryland in 1634, designed to coordinate with the original cross used at the Mass.

Other items of interest in the papal exhibit include zuccheti worn by Saint John Paul II and Popes Benedict XVI and Francis, as well as two first-class relics of Saints John XXIII and John Paul II. You can also see an iron replica of a staff of Pope Paul VI given to the Basilica in 2013 by the Choir and the people of Montagna Inzino, Gardone Valle Trompia, Brescia, Italy, in honor of the 50th anniversary of the election of Pope Paul VI. And last but not least, you can find the stunning Papal Stole worn by Saint John XXIII at the opening of the Second Vatican Council and the Coronation Tiara of Blessed Saint Paul VI located on the bridge of Memorial Hall.

View more photos in the slideshow below: