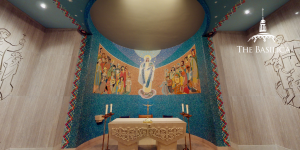 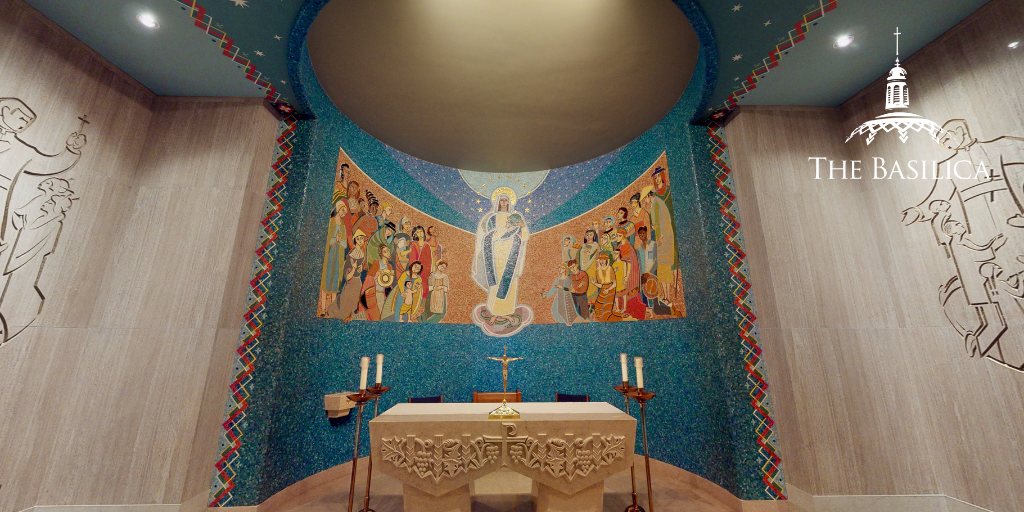 Did you know that October 14 of this year marks the 55th anniversary of the dedication of the Mary, Queen of Missions Chapel in 1967? This colorful chapel depicting Mary and the faithful from around the world honors Mary’s unique role in global missions with brilliant mosaics and carvings. Today, we invite you to explore this space virtually and learn more about its symbolism and history.

About the Mary, Queen of Missions Chapel

In the Basilica’s Mary, Queen of Missions Chapel, the Blessed Mother is depicted in a Venetian glass mosaic. She is crowned with twelve stars, holding a globe surmounted by a cross, with the moon and the serpent beneath her feet (Revelation 12:1). On either side of Mary are men and women from the various continents and cultures evangelized by the Oblates of Mary Immaculate, including the Asian-Pacific, South America, and the Arctic Circle.

The chapel inscription, “They will always look upon her as their mother,” is taken from the writings of Saint Eugene de Mazenod (1782–1861), founder of the Oblates of Mary Immaculate. A mission cross of the Oblates is in the center.

You can experience the Mary, Queen of Missions Chapel in immersive 360° with our virtual tour below! 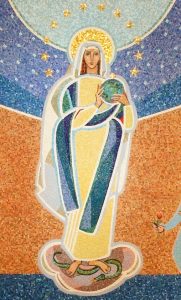 Prayer to Mary, Queen of Missions

The Chapel of Mary, Queen of Missions is inscribed with the following prayer, which is taken from the writings of Saint Eugene de Mazenod:

Today, each day and in our last hour we entrust ourselves entirely to your loving and singular care. We place in your hands: our entire hope and happiness, our every anxiety and difficulty, our whole lives. May our every endeavor be directed and guided according to the Will of Your Son, which is your will, by the aid of your prayers and special favor with God. Amen.”