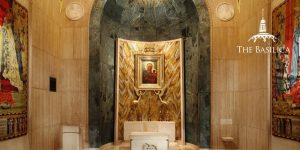 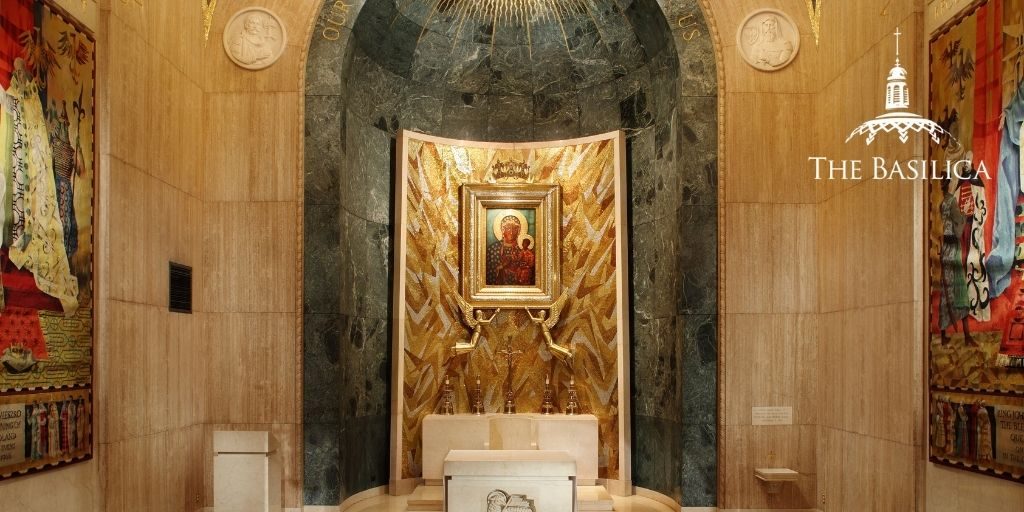 August 26 marks the Feast of Our Lady of Czestochowa, a beloved Polish Marian devotion. Today, we invite you to learn more about this Marian devotion and explore where it is honored at the basilica virtually.

The history of the devotion to Our Lady of Czestochowa dates back to the 14th century, when Prince Ladislaus of Opole, Vice Regent of Poland, brought the icon to Czestochowa in 1382. There, the Pauline Fathers took guardianship of the icon in their monastery at Jasna Gora, “The Bright Hill.” Unfortunately, when the shrine came under attack from the Hussites on Easter Sunday in 1430, the icon was slashed with a sword, marring Mary’s face with scars.

The region once again was imperiled 200 years later when the Swedish army began to invade; but miraculously, the monastery was untouched. In the wake of this astonishing event, King Jan Casimir declared the Blessed Virgin to be Queen of Poland on April 1, 1656. This Marian devotion remained close to the heart of the Polish people throughout the ages, and was especially significant to Pope John Paul II and the Solidarity Movement in Poland. 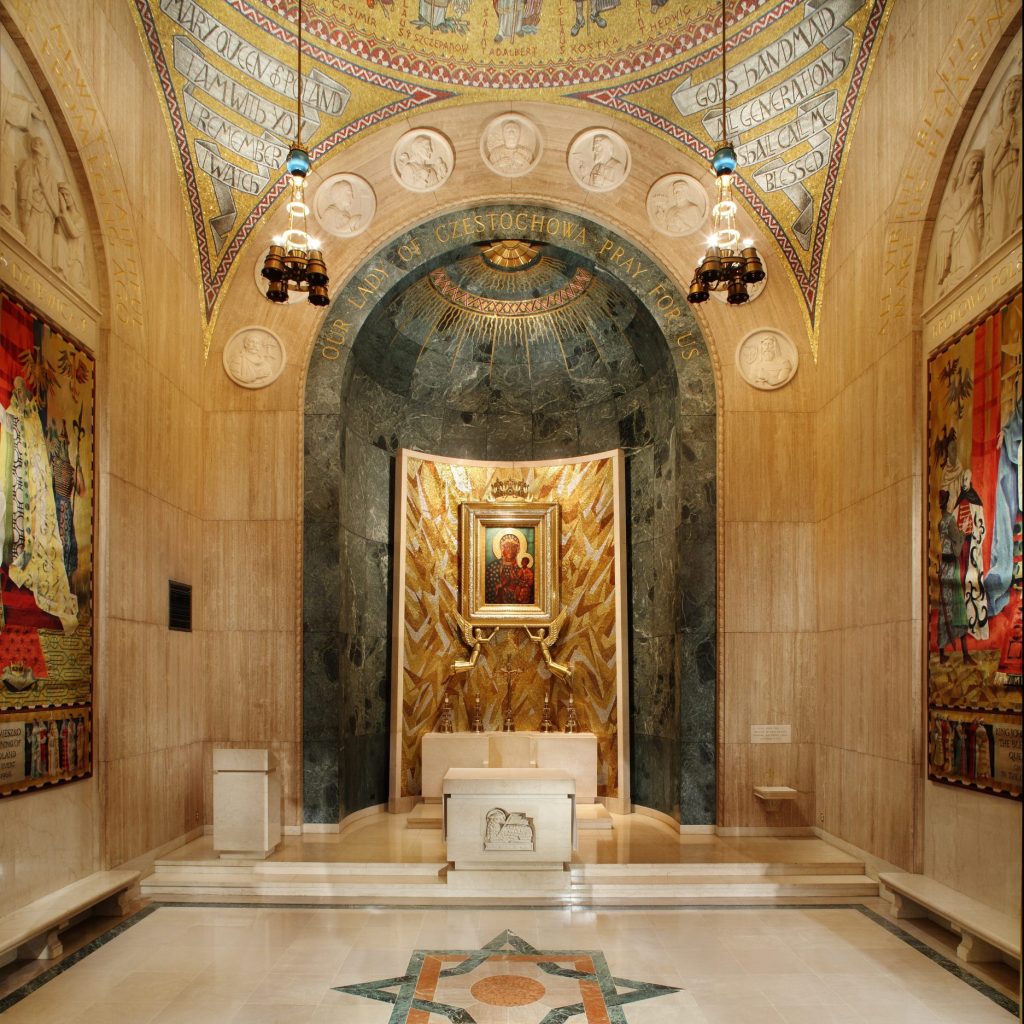 The Basilica’s Chapel of Our Lady of Czestochowa

In the Chapel of Our Lady of Czestochowa at the Basilica, the icon is an inexact copy of the original by Polish artist Leonard Torwirt. While the Basilica icon bears the same “scars” the Blessed Mother has in the original, it has additional ornamentation on the halo of the Virgin and Child. Symbols of royal lineage grace her adornments; her robe is embellished with fleur-de-lis and her brow is set with a six-pointed star.

Stretching above the chapel is a mosaic dome designed by Ernoe Koch which features 20 holy men and women to represent Poland’s love for God and the Blessed Mother. At the front of the chapel is a Botticino altar sculpted with the figure of a lamb to symbolize the persevering faith of the people of Poland. The lamb also ties the altar to the Triumph of the Lamb mosaic in the sanctuary, which was gifted to the Basilica by the Polish people.

You can explore the unique chapel of Our Lady of Czestochowa in 360° with our virtual tour below!

Did you know that Pope John Paul II visited this chapel in the Basilica twice? On his first visit in 1976, he was still known as Karol Cardinal Wojtyla, Archbishop of Krakow. His second visit three years later was recorded in a marble tablet on the right side of the chapel. Shortly before his canonization, a mosaic rondel portrait of him was added to the chapel.

An Act of Consecration to the Mother of God

The chapel contains the following text from Cardinal Stefan Wyszynski:

O Mother of God, Immaculate! To thee do I dedicate my body and soul, all my prayers and deeds, my joys and sufferings, all that I am and all that I have. With a joyful heart I surrender myself to Thy bondage of love. To Thee will I devote my services of my own free will for the salvation of mankind, and for the help of the Holy Church whose Mother Thou art. From now on my only desire is to do all things with Thee, through Thee, and for Thee. I know I can accomplish nothing by my own strength, whereas Thou canst do everything that is the will of Thy Son and Thou art always victorious. Grant, therefore, O Helper of the faithful, that my family, parish, and homeland might become in truth the Kingdom where Thou reignest with Thy son. Amen

In honor of Our Lady of Czestochowa, we invite you to light a candle today at the National Shrine. Vigil candles burn in the chapels throughout the Great Upper church and lower crypt level of the National Shrine. Each candle represents the faith of the supplicants and their fervent prayers entrusted to the loving intercession of the Blessed Mother.