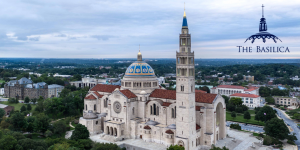 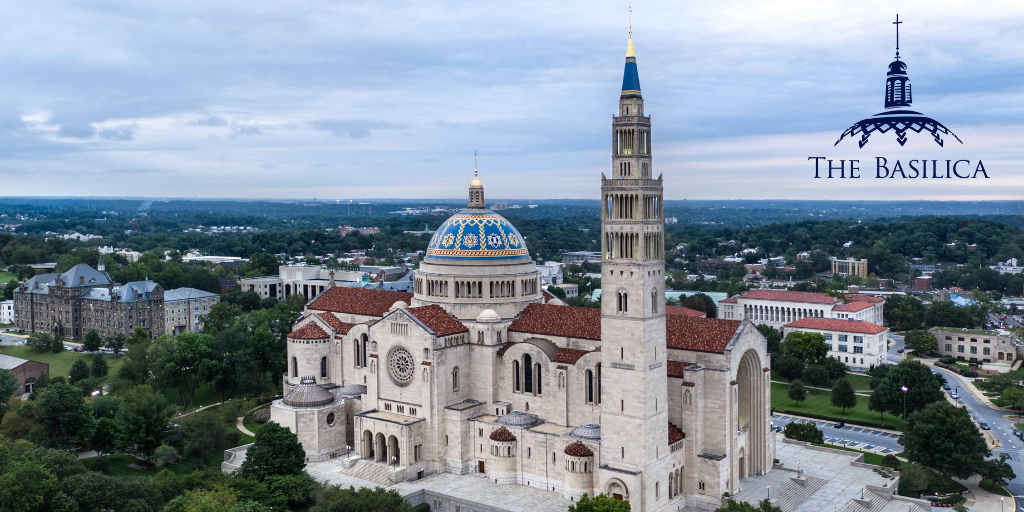 Did you know that the Knights Tower Carillon has 56 bells ranging in weight from 21 to 7200 lbs.? For over half a century, this instrument has rung out during pivotal moments in the life of America’s Catholic Church, from the solemn remembrance of 9/11 in 2002 to the jubilant arrival of Pope Francis in 2015. As we celebrate the anniversary of the installation of the Carillon on July 23, we invite you to learn more about the majestic bells of the Knights Tower and the meaning of their symbolism and inscriptions.

History of the Bells

Although it was decided from the outset that the Shrine campanile would house a precision musical instrument, it wasn’t until 1963 that the Carillon was installed after a donation from the Knights of Columbus. On the day of the ”christening,” Archbishop O’Boyle remarked that, “Long after we are gone, this tower and these bells will be paying honor to God and to his Mother.”

While the bronze cast bells are permanent and don’t require maintenance, the mechanical action and the clock-controlled electrical equipment are subject to the effects of age, use, weather, humidity, and pollution. In the summer of 1988, the I. T. Verdin Company of Cincinnati, Ohio, the oldest and largest tower bell company in the United States, constructed new action components, clock, control system and keyboard. In addition, new computerized features were added, and the restored carillon was heard for the first time on Christmas Eve in 1988.

The two bell chambers are located at the levels of 172 ft. and 223 ft. The carillonneur must climb a 208-step spiral staircase to get to the cabin, which is located at the 200 ft. level between the tiers of bells. From here, the carillonneur can play each of the 56 bells by either striking a wooden baton with the hand (or closed fist) or a wooden pedal with the foot.

Together the bells weigh 37,150 lbs. and produce pitches in a two-octave range, with the Mary bell striking on the hour and the Christopher, Edward, Francis and Virgil bells striking on the quarter hours. Each of the bells includes an inscription that is written as if the bell itself was speaking in first person. And because each of the bells is named after a saint, the text on the bell is also meant to reflect something the namesake might say. You can learn more about some of the largest named bells below.

A Bb bell weighing 7200 lbs., the Blessed Virgin Mary bell is the largest bell in the Knights Tower Carillon. It is taller the average man and bears the Emblem of the Third Degree of the Knights of Columbus, which serves as the official “stamp” designating the entire carillon as the gift of the Knights of Columbus. Supreme Knight, Luke E. Hart, under whose leadership both the carillon and the tower were donated to the Shrine, requested that the largest bell be dedicated to the Blessed Mother, Queen of Heaven and Patroness of the U.S., thereby expressing the love and devotion of the Knights to her. It bears the inscription:

Mary is my name.
Mary is my sound.
Beloved Mother
Queen of Heaven and Earth
Queen of this dear land
for knights to God and country bound
and all who hear my voice
I sing the praises of God.

Bell No. 2 – The Saint Christopher Bell 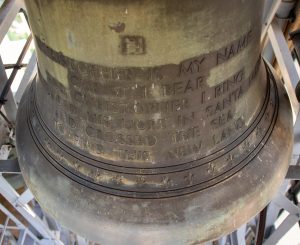 A C bell weighing 5100 lbs., the Saint Christopher Bell is named for Christopher Columbus, the namesake of the Knights of Columbus. The Bell features a cross insignia and a figurine of the Santa Maria, one of the ships the explorer took to the Americas. It bears the inscription:

Christopher is my name.
Christ I bear
For Christopher I ring
who placed his hope in Santa Maria
and crossed the sea
to find this new land.

Bell No. 3 – The Saint Michael Bell

A D bell weighing 3600 lbs., the Saint Michael is named in honor of Blessed Michael McGivney (1852-1890), founder of the Knights of Columbus. It features an insignia of a chalice and stole, representing the priesthood, and bears the following inscription: 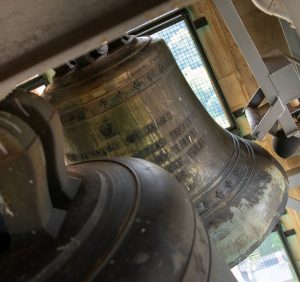 An Eb bell weighing 3050 lbs., the Saint James Bell is named in honor of Supreme Knights James T. Mullen (1882-1886), James E. Hayes (1897-1898), and James A. Flaherty (1909-1927). It features a scallop shell insignia to represent pilgrimage – a standard reference to Santiago de Compostela Archcathedral Basilica, one of three great places of pilgrimage in Medieval Europe. The bell bears the following inscription:

The Message of James
Of his own will he has begotten
us by the word of truth
that we may be the first fruits
of his creatures. (James 1.18) 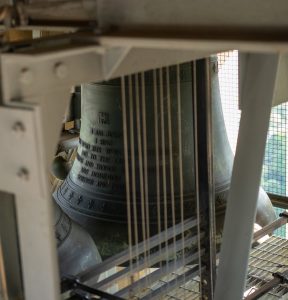 Bell No. 5 – The Saint John the Evangelist Bell

An E Bell weighing 2550 lbs., the Saint John the Evangelist bell is named in honor of Supreme Knights John J. Phelan (1886-1897), John J. Cone (1898-1899), and John E. Swift (1945- 1953). It features the insignia of the Eagle, an attribute for John, signifying the elevated inspiration of his Gospel, Letters and Book of Revelations. The bell bears the following inscription:

I am John, I sing, to him who sits upon the throne and to the Lamb, blessing and honor and glory and dominion forever and ever. (Rev. 5.13) 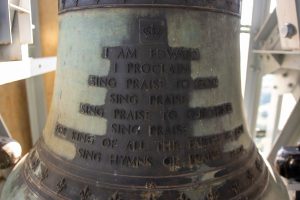 Bell No. 6 – The Saint Edward Bell 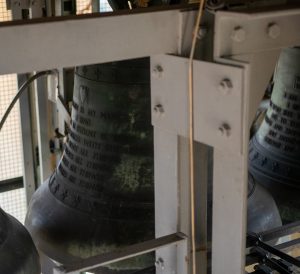 Bell No. 7 – The Saint Martin of Tours Bell

An F# bell weighing 1820 lbs., the Saint Martin of Tours Bell is named in honor of Supreme Knight Martin H. Carmody (1927-1939) and features the insignia of a sword cutting a cloak. This symbol harkens back to an encounter St. Martin of Tours had with a beggar while on horseback in Amiens in Gaul. He took his sword, cut his officer’s cloak in half, and gave it to the beggar. Later, he had a vision of Christ wearing the cloak. The bell bears the following inscription:

Bell No. 8 – The Saint Francis of Assisi Bell

A G bell weighing 1560 lbs., the Francis of Assisi Bell is named in honor of Supreme Knight Francis P. Matthews (1939-1945). It features an insignia of Crossed Arms, representing the arms of Jesus and Francis crossed over the Tau, both bearing the imprint of the Crucifixion nails. Francis’ arm is in the sleeve of his habit, honoring his receipt of the stigmata on Mt. Alverna. The bell bears the inscription:

The Canticle of Francis: The Most High Omnipotent Merciful Lord, thine is all praise and every benediction—praise and bless my Lord, render thanks to him and serve him with great humility.

A G# bell weighing 1330 lbs., the Saint Luke Bell is named in honor of Supreme Knight Luke E. Hart (1953- 1964). It features an Ox insignia, symbolizing the evangelist whose writings emphasized the sacrificial and redemptive aspects of the life and death of Jesus. It bears the following inscription:

The Message of Luke. Praise God and say glory to God in the highest and peace on earth to men of good will. (Lk. 2.15)

The bells from the Knights Tower call the faithful to prayer and announce significant events in the life of the Church. The bells are rung each hour, prior to Mass, and at the Angelus. Visitors can also listen to carillon recitals each Sunday at 2:30 pm while walking around the grounds of the Basilica. You can see and hear the glorious bells of the carillon in the videos below.

6 Carmelite Saints You Should Know
Virtual Tour: Mary Across the Continents – Pt. I