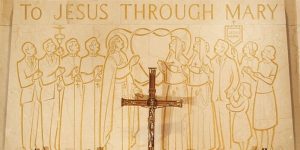 On April 28, we celebrate the Memorial of Saint Louis Marie Grignion de Montfort, Founder of the Society of Mary of Montfort. The Basilica honors the legacy of this “herald of Immaculate Conception” and the Marian devotion which he profoundly shaped in the Mary, Queen of All Hearts Chapel.

177 years ago, Saint Louis de Montfort’s work Treatise on True Devotion to the Blessed Virgin was published. Though Montfort had written it over a century prior at the turn of the 18th century, it went undiscovered until 1843. It became almost immediately popular in spreading the Marian devotion. Long before the Second Vatican Council promulgated its teaching on the doctrine of the Immaculate Conception, Louis de Montfort had already written on the subject.

The Heart of Saint Louis’ Message

At the heart of Louis’s work is this message: that the supreme purpose of the Marian devotion is to guide the faithful to Christ. In his Treatise of True Devotion, number 214, Louis wrote:

The more, then, that you gain the favour of that august Princess and faithful Virgin, the more will you act by pure faith; a pure faith which will put you above all sensible consolations and extraordinary favours; a lively faith animated by charity, which will enable you to perform all your actions from the motive of pure love; a faith firm and immovable as a rock, through which you will rest quiet and constant in the midst of storms and hurricanes; a faith active and piercing, which like a mysterious skeleton key, will give you entrance into all the mysteries of Jesus, the ultimate goal of man, and into the heart of God himself…

In the Catholic faith, Mary serves as an example of ultimate devotion to Christ. By paying homage to Mary, Queen of All Hearts, the faithful seek a heart as full of pure love for Christ as hers. As Louis remarked in The Secret of Mary (pp. 71-72): 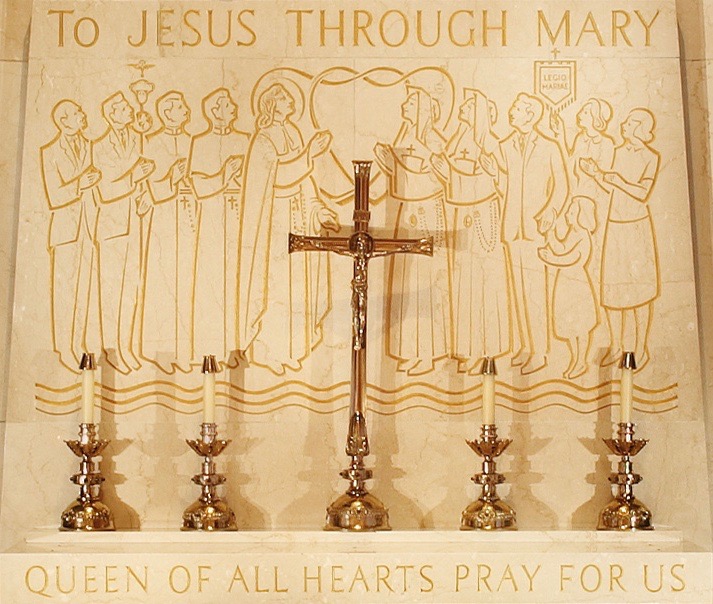 The Mary, Queen of All Hearts Chapel in the Basilica

In the Mary, Queen of All Hearts Chapel, the Botticino reredos portray Mary kneeling by the crib and offering Jesus to the world. Beneath the reredos is Saint Louis de Montfort (center left), and beside him Blessed Marie-Louise de Jésus, a contemporary of de Montfort and co-foundress of the Daughters of Wisdom.

The mosaic back wall contains ten symbols of the Blessed Virgin used in the writings of de Montfort (R–L): the heart; the lily; the mystical rose; “M” over an inverted “V”; the crescent moon; the royal crown; the anchor and rope; the Star of the Sea; the crossed scepters; and a joined “M” and “R.”

Prayer for the Devotion to Mary

The Mary, Queen of All Hearts Chapel is inscribed with this prayer:

“Father, you have given us the Mother of Your Son to be our Queen and Mother. With the support of her prayers may we come to share the glory of your children in the kingdom of heaven. We ask this through our Lord Jesus Christ, Your Son, who lives and reigns with You and the Holy Spirit, One God, Forever and Ever.”

Boldness in the Face of Corruption: St. Catherine of Siena’s Life and Legacy
The Life and Gospel of Saint Mark the Evangelist