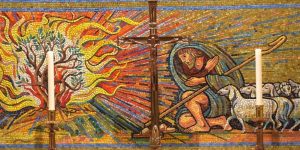 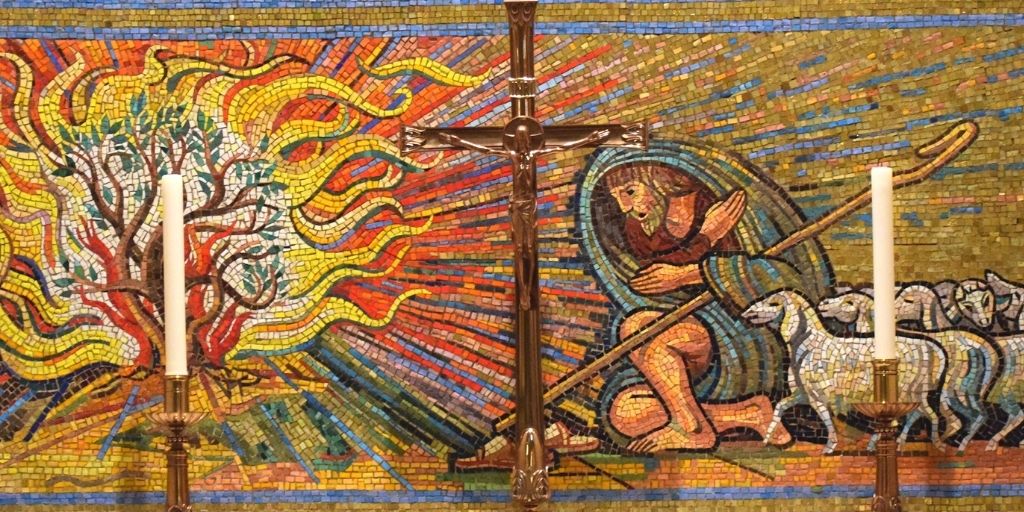 One of the major figures of the Old Testament, Moses exemplifies how God can use anyone – no matter how weak or insignificant they may seem – to accomplish His purposes. Though Pharaoh’s edicts could have ended Moses’ life when he was just a baby, God preserved him and raised him to be the leader of the Israelites in their flight from Egypt to the Promised Land.

After Joseph’s death, Israel came under the rule of an oppressive Pharaoh. As the Israelites grew stronger, he became fearful they would rise against him and ordered the execution of all male Israelite babies. However, after Moses was born, his mother protected him by fashioning a basket of rushes and setting it afloat in the river. His sister Miriam followed the basket along the river, and when it was found by Pharaoh’s daughter, Miriam brought her mother to nurse the baby.

He grew up among the Egyptians, but after he struck and killed an Egyptian who was beating a Hebrew, he was forced to flee to Midian, where he married Zipporah, the daughter of the priest Jethro. Together, they had two sons.

One day, while Moses was tending Jethro’s flocks on Mt. Horeb, the angel of the Lord appeared to him in a burning bush. From that bush, God called on him to deliver the Israelites from the oppression of Pharaoh. Moses was hesitant, but the Lord gave him powerful signs: the ability to turn his staff into a snake, to make his hand appear leprous, and to turn water into blood. He again complained to the Lord, saying that he was slow of speech, and the Lord commissioned Aaron to serve with him in Exodus 4:10-14:

Moses, however, said to the Lord, “If you please, my Lord, I have never been eloquent, neither in the past nor now that you have spoken to your servant; but I am slow of speech and tongue.” The Lord said to him: “Who gives one person speech? Who makes another mute or deaf, seeing or blind? Is it not I, the Lord? Now go, I will assist you in speaking and teach you what you are to say.” But he said, “If you please, my Lord, send someone else!” Then the Lord became angry with Moses and said: “I know there is your brother, Aaron the Levite, who is a good speaker; even now he is on his way to meet you. When he sees you, he will truly be glad.”

Moses returned to Israel with Aaron and asked Pharaoh to let the Israelites go into the wilderness to make sacrifices to God, but he refused. Instead, Pharaoh forced the Israelites to gather their own straw to make their bricks, which made them bitter towards Moses. Once again, the Lord told him to go to Pharaoh, who asked them to prove themselves by working a miracle. Aaron cast down his staff, and it turned into a snake. However, Pharaoh’s magicians were able to replicate the miracle, and Pharaoh’s heart was hardened.

The Lord responded by bringing a series of plagues upon the Egyptians. First, the water of the Nile was turned into blood. This was followed by waves of frogs, gnats, and flies. Next, all of the Egyptians’ livestock died. Then, all the people were stricken with boils, and hail destroyed their fields. All the crops that were left were then destroyed by locusts, which was succeeded by darkness over all the land for three days. With each successive plague, Pharaoh’s heart was hardened more and more.

With the final plague, the Lord struck down the firstborn in every Egyptian household. The Israelites were protected from death by the institution of the Passover; each of their households slaughtered a lamb and spread its blood on their doorposts. Though they did not realize it, the slaughter of this innocent lamb was a picture of the coming Messiah’s sacrifice for them. After this great tragedy, Pharaoh relented and bid the Israelites to leave in haste.

After having lived in the land of Egypt for 430 years, the Israelites began their journey to the Promised Land, with Moses as their guide. The Lord led them through the wilderness with a pillar of cloud during the day and a pillar of fire at night. As they neared the Red Sea, Pharaoh’s army came in pursuit, and God told Moses to stretch his hand over the sea; when he did, the Lord sent a strong wind to divide it. The people of Israel crossed on dry ground, but the Egyptians following them were drowned as the sea returned to its place.

What We Can Learn from Moses

Though Moses was in turns weak, ungrateful, and impatient, his story demonstrates how the Lord uses imperfect people to accomplish His perfect purpose. Moses was hesitant to answer God’s call because he felt inadequate and was slow of speech. He also struggled with anger, as evidenced by when he struck and killed the Egyptian.

Yet, in God’s strength, Moses led the entire nation of Israel out of their captivity in Egypt, provided them with counsel, led them in battle, and helped them obey the Lord’s commands. Not only did the Lord equip him with the skills he needed to lead, but He also revealed himself to Moses in a personal way. Exodus 33:9,11,18-23 tells us:

As Moses entered the tent, the column of cloud would come down and stand at its entrance while the Lord spoke with Moses…The Lord used to speak to Moses face to face, as a person speaks to a friend…

Then Moses said, “Please let me see your glory!” The Lord answered: “I will make all my goodness pass before you, and I will proclaim my name, ‘Lord,’ before you; I who show favor to whom I will, I who grant mercy to whom I will. But you cannot see my face, for no one can see me and live. Here, continued the Lord, is a place near me where you shall station yourself on the rock. When my glory passes I will set you in the cleft of the rock and will cover you with my hand until I have passed by. Then I will remove my hand, so that you may see my back; but my face may not be seen.”

Moses’ example reminds us that no matter how fallible we are, our God is mighty. As 2 Corinthians 12:9 says:

But he said to me, “My grace is sufficient for you, for power is made perfect in weakness.” I will rather boast most gladly of my weaknesses, in order that the power of Christ may dwell with me.

This is Part I of a two-part series. Read Part II here.