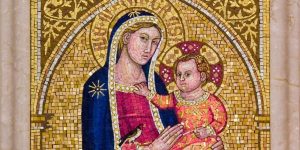 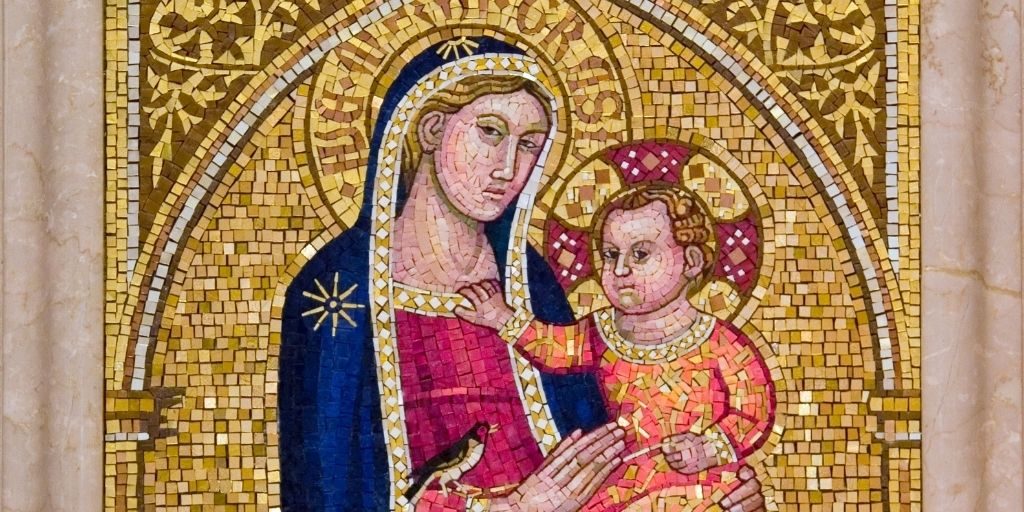 Did you know that the devotion to Our Lady of Grace of Montenero began in the 14th century in Livorno, Italy? Tradition holds that Mary appeared to a crippled shepherd boy there, and this devotion arose as others sought healing from the Blessed Mother. Today, we invite you to learn about the history of this Marian devotion and how it is honored in the Basilica.

Origin of the Devotion

Legend holds that in 1345, a poor crippled shepherd boy was tending his flock near the foot of Monte Nero, when suddenly, a brilliant light appeared, and a heavenly fragrance filled the air. At the center of the light was an image of the Blessed Mother, and a voice spoke to him, asking him to carry the image to the top of Monte Nero. The voice assured him that he could complete the journey, despite his crippled leg and crutch. It took all the boy’s strength to crest the summit, and at the top, he collapsed in fatigue. Then he felt a strange sensation in his leg, as though it had been “untied.” Strengthened by the miracle, he bounded down the mountain waving his crutch over his head, exclaiming his gratitude to the Blessed Mother.

Following the shepherd boy’s miraculous healing, a shrine was built on the site, and the miraculous image was placed atop the altar there. In the years that followed, more miraculous events took place which were attributed to the intervention of Our Lady of Grace of Montenero.

This image features the “tender touch” motif with some unique features: the ears of both Mother and Christ Child are unusually large, inclining towards the petitioner. The Child clutches the garment of His mother, seeking safety, while loosely holding a cord tethered to the feet of the Finch perched on her arm – a reminder that the soul of the viewer is “in the hands of God.” The Finch is also a symbol of the passion; according to legend, when Jesus carried his cross, a Finch plucked a thorn from the crown, and droplets of blood splashed on its head, staining its feathers red.

Our Lady of Grace of Montenero and St. Elizabeth Ann Seton

The Basilica’s mosaic of Our Lady of Grace of Montenero is a replica of the painting that is at the Shrine of Our Lady of Grace in Livorno, Italy. It is positioned beneath a stained-glass window of Elizabeth Ann Seton, who first began her journey to Catholicism after attending Mass at the Shrine of Montenero in 1803. The mosaic was a gift of the Bishop and parishioners of Saint Elizabeth Ann Seton in Livorno, who came to the Basilica to celebrate the mosaic dedication on June 22, 2009.