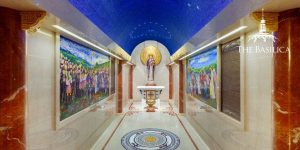 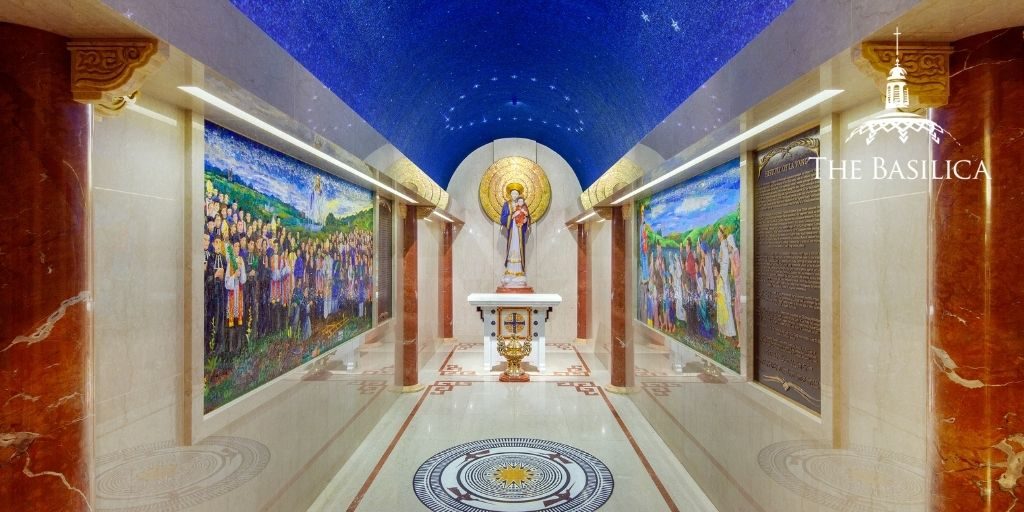 Between 1630 and 1886, it is estimated that somewhere between 130,000 and 300,000 Christians were martyred in Vietnam. According to the Vatican, these martyrs endured some of the most brutal torture in Christian history. In the face of unbelievable suffering, they remained steadfast in their faith, willing to give their lives for the cross. On June 19, 1988, the known holy martyrs were canonized, including 96 Vietnamese, 11 Spanish Dominicans, and 10 French members of the Paris Foreign Missions Society (MEP). The lives and legacies of the Vietnamese martyrs are honored in the Chapel of Our Lady of La Vang, which also recognizes the role the Blessed Mother played in strengthening the faithful during this time.

Today, we invite you to reflect on their bravery and to explore where their stories are portrayed in the Basilica.

The Origin of the Devotion to Our Lady of La Vang 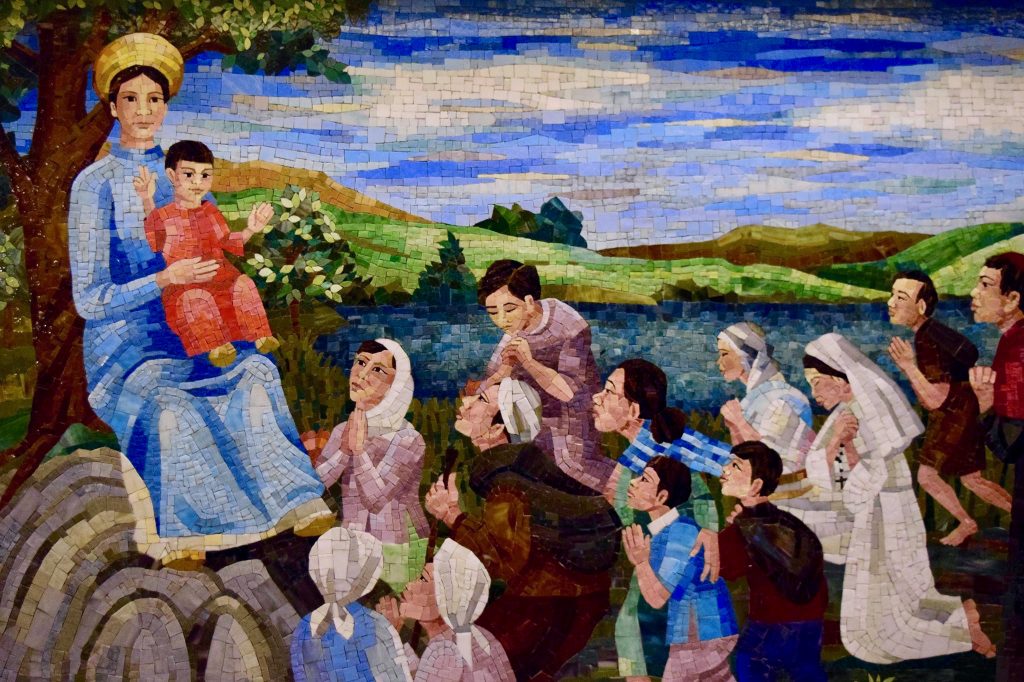 In the 1700s, Vietnam was ravaged by power struggles and rebel uprisings. In this politically unstable environment, the government was particularly concerned about the potential intrusion of the Roman Catholic Church, and brutally persecuted Catholics in the country. Forced to flee their local villages, the faithful sought refuge in the jungle of the La Vang region.

Each night, they gathered under a great tree to pray the rosary, and one evening, a beautiful woman in a magnificent cloak appeared with a baby boy in her arms. She declared that she was the Mother of God, offered them fern leaves to treat their physical ailments, and promised to receive their prayers with maternal generosity. As persecution continued, the faithful saw the woman appear again and again at the same spot, offering consolation and encouragement.

Honoring the Vietnamese Martyrs in the Basilica

In the Basilica’s Chapel of Our Lady of La Vang, these appearances are portrayed on the right in a Venetian glass mosaic designed by Pham Huy Thông. The mosaic on the left of the chapel is a copy of the painting The Martyrs of Vietnam, which memorializes the faithful slain in the country from 1630-1886. Though the exact number of the faithful martyred is not known, the bronze tablet to the right of the mosaic lists the names of the 117 canonized martyrs. 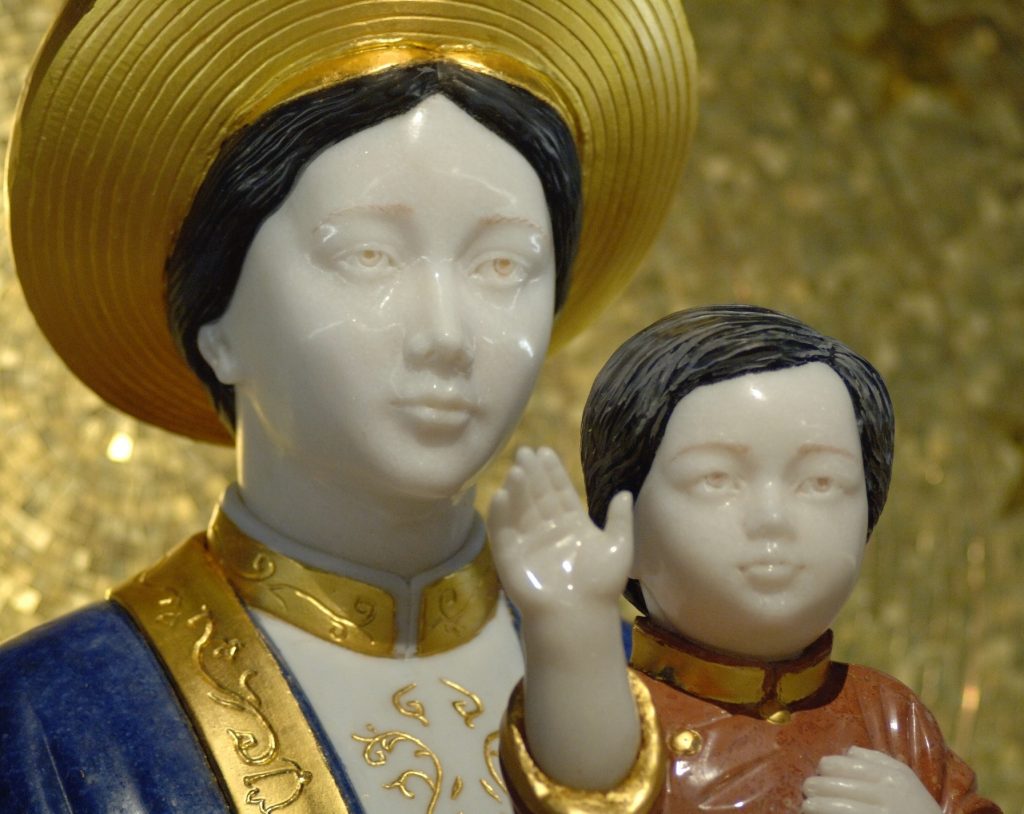 Our Lady of La Vang at the Basilica

In the center of the floor is a marble rondel representing an ancient bronze drum, a symbol of the civilization and pride of Vietnam. It features a 12-pointed star that is reminiscent of the 12 stars on the crown of the Blessed Mother, and the four birds represent the four directions of a compass. The ceiling above the altar is covered with 24 stars – representing the 24 hours of the day – in a mosaic colored the blue of the night sky. Above the altar, the ceiling portrays the constellations Ursa Major and Ursa Minor (the big and little dippers). Did you know that Ursa Minor contains the North Star, which symbolizes Mary, the “Star of the Sea”? As the Star of the Sea, Mary serves as the guiding star for the people of Vietnam, leading them to her son.

The chapel features a statue of Our Lady of La Vang which measures 5 feet tall and was designed by artist and sculptor Giancarlo Buratti. The marble carver for the statue was Franco Dolfi, who is a third-generation artisan, as well as one of a handful of artists in the world capable of carving in the multi-marble style used for the statue. With Argentina Blue, Red Carrara from Northern Italy, Oriental Black, and Portuguese marbles, the statue is the first of its kind at the Basilica.

You can explore the chapel in 360° with our virtual tour below! 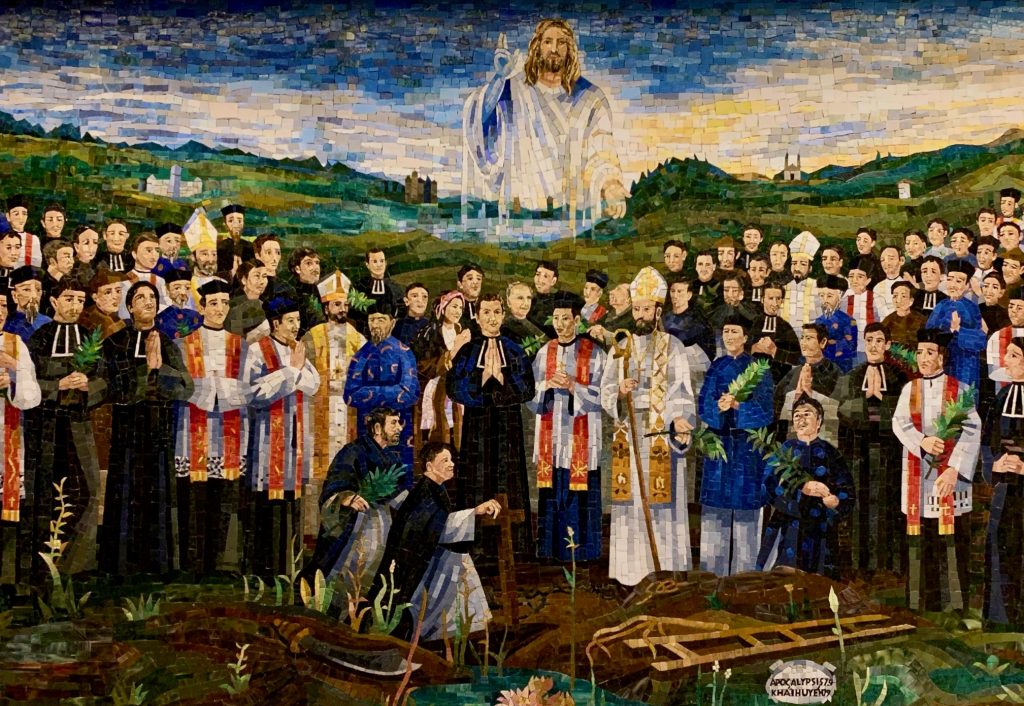 Our Lady of La Vang: A Comfort to Those Who Cry Out

According to legend, the term “La Vang” derives from a word that means “crying out.” Today, scholars believe the phrase originated in the ancient practice of naming a location for an indigenous tree or plant, with “La” meaning “leaf” and “Vang” meaning “herbal seeds.” Whatever the case, the meaning of La Vang for the faithful today remains the same: through this devotion, the Blessed Mother is a comfort and encouragement to the suffering faithful who cry out for help.

The Chapel includes the following prayer to Our Lady of La Vang:

O Mary, Holy Mother of La Vang, Mother of God and our most loving Mother, pour out your abundant blessings upon your children who earnestly implore you. Give us a heart of compassion and charity to build a culture of love and life. Help us to live lives of virtue and hope, so that we may enjoy eternal life and the happiness of the Trinity with you for all eternity. Amen.

In honor of Our Lady of La Vang, we invite you to light a candle today at the National Shrine. Vigil candles burn in the chapels throughout the upper church and lower crypt level of the National Shrine. Each candle represents the faith of the supplicants and their fervent prayers entrusted to the loving intercession of the Blessed Mother.