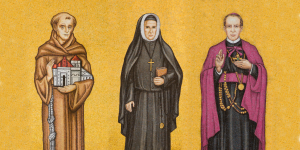 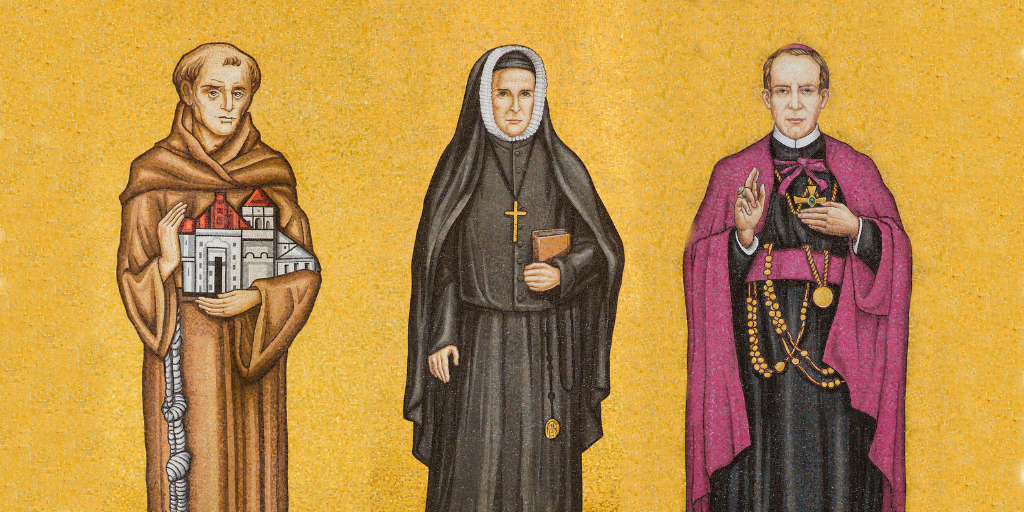 This July, we’re celebrating how the Basilica honors the different cultures, peoples, and traditions that are the fabric of the Catholic faith in the United States. In this new series, we share the stories of some of the saints of America – many of whom came from far-off lands to share the Gospel and make their home in the United States. Each story forms a unique and beautiful piece of the mosaic of American Catholicism.

St. Junípero was born as Miguel José Serra to poor farmers in Petra, Majorca, Spain, on November 24, 1713. At the age of 16, he joined the Franciscan order, choosing the name of Junípero in honor of St. Francis of Assisi’s brother companion. He is believed to have been ordained in 1738. A scholar of philosophy and religion, Junípero earned his doctorate in theology from Lullian University, Palma at the age of 29, and soon after began teaching as a professor there, serving as the Scotistic chair of theology. When he was 35, he journeyed across the seas to America and arrived in Vera Cruz, Mexico in 1749. From there, he walked over 200 miles to Mexico City – a trek which resulted in a leg infection that would render him lame for the rest of his life.

In America, he began his ministry in Serra Gorda with the Pame Indians, overseeing the construction of a church in the area, and evangelizing the natives after learning the Otomi language. Junípero introduced them to agricultural and irrigation systems, and protected them from the Spanish military and government. During an extended dispute over the valley of Tancama, Junípero stood up for the rights of the indigenous people against the colonizers.

After a grueling 900-mile journey, Junípero established the first mission in San Diego, beginning the ministry that would become the most central aspect of his legacy. In addition to founding a total of 21 missions across California, it is estimated that over the course of his ministry, Junípero Serra baptized over 6,700 indigenous people and confirmed over 4,500. Despite suffering from a variety of medical conditions that often made traveling extremely uncomfortable, he continued to journey across California. At the age of 70, Junípero Serra passed away at Mission San Carlos, where he was also buried. In 2015, the Basilica was proud to host the canonization of Junípero, presided over by Pope Francis – the first canonization ever to take place on U.S. soil. He is portrayed in the Basilica in the east portico tympanum, a sacristy window in the Great Upper Church, and the Trinity Dome mosaic.

Did you know that St. John Nepomucene Neumann was the first American man to be canonized? The patron of immigrants and sick children, Saint John Neumann’s zeal for ministry serves as an inspiration to the faithful today.

From an early age, John Nepomucene Neumann had a keen sense of a higher calling to the priesthood. This motivated him to be a diligent student, enrolling at a diocesan seminary and later at a university in Prague to study theology. However, at the conclusion of his studies, John found himself faced with a seemingly insurmountable obstacle:  Bohemia already had plenty of priests, and none of the dioceses in his native land would ordain him. Seeking an alternative, he applied to dioceses in the United States, but received no response. Yet John was not easily deterred; taking a leap of faith, he sailed across the ocean with only $40 in his pocket, arriving in New York City in 1836. Only a month later, he was ordained and spent four years working with German immigrants in Buffalo, New York. Though John felt the work was meaningful, he found his life to be lonely and difficult. Longing for a greater spiritual community, he joined a Redemptorist order and continued his ministry up and down the East Coast.

John’s hard work was recognized in 1852, when he was appointed bishop of Philadelphia. In this beautiful American city, he dedicated himself to the oversight of building schools, churches, and a cathedral. He was particularly committed to offering educational opportunities to immigrant children. The American hierarchy approved two catechisms written by John in 1852, and in the years that followed, the works became standard texts. Whether he was founding churches and schools, or writing his catechisms or articles in newspapers, John left an indelible mark on the lives of thousands of Americans. He passed away in 1860 after suffering from a stroke in Philadelphia and was canonized in 1977. He is honored in the Basilica in Memorial Hall, the Our Lady of Holy Hostýn Chapel, the Second Coming mosaic, the Our Mother of Perpetual Help Chapel, the southeast nave clerestory window, and the Trinity Dome mosaic.

On August 29, 1769, Saint Rose Philippine Duchesne was born in Grenoble, France. When she was 18, she joined the Convent of the Visitation of Saint Marie d’en Haut as a novice. A few years later in 1804, she joined the Society of the Sacred Heart of Jesus as a novice. There, she felt a deep calling to pursue missions; in a letter to Mother Barat, she once wrote:

I spent the entire night in the new World … carrying the Blessed Sacrament to all parts of the land … I had all my sacrifices to offer: a mother, sisters, family, my mountain! When you say to me “now I send you.” I will respond quickly “I go.”

Despite the sense of urgency she felt, Philippine was unable to pursue foreign missions until 12 years later. In 1818, she traveled to St. Charles, Missouri, with five other women to found the first order of the Society of the Sacred Heart outside of France. The mission was not without challenges: Philippine had trouble learning English and interacting with the Native Americans and also faced financial difficulties. She founded the first free school west of the Mississippi that year, and within the decade, founded six houses.

In 1852, Philippine passed away at age 83. She is honored in the Basilica in a statue in Memorial Hall and in the Trinity Dome mosaic. In 1988, Rose Philippine Duchesne became the fourth citizen of the United States to be canonized.

Glorifying God in the Ordinary: St. Bonaventure
Prayers for the Nation