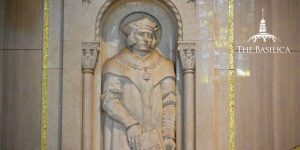 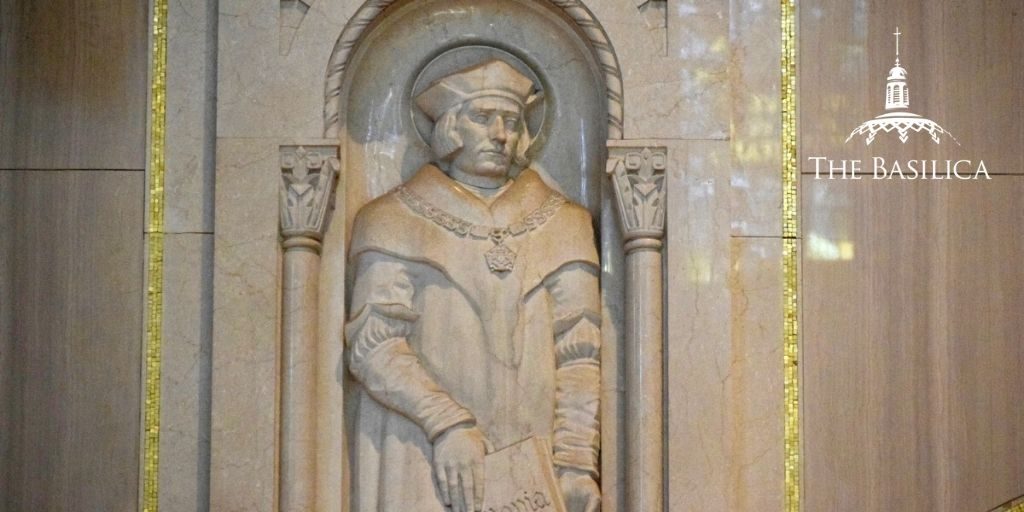 “What did Nature ever create milder, sweeter and happier than the genius of Thomas More?” – Erasmus

On June 22, we celebrate the feast of St. Thomas More, a public servant committed to moral integrity. He is the patron of lawmakers and politicians, and is honored in the Basilica in the Second Coming Mosaic and in the northwest nave bay of the Great Upper Church.

Thomas More was born into a respected family in London in 1478. As the son of a prominent judge, he was highly encouraged by his family to become a lawyer. However, Thomas became fascinated with classical literature after enrolling at Oxford at age 15 and wanted to pursue an academic career. His father feared that this zeal for intellectual inquiry would lead him to a life of poverty, however, and sent him to law school in London instead.

When Thomas was 21, he met a scholar named Erasmus, and the two became fast friends. They shared an erudite sense of humor, a mutual dislike of scholasticism, and most importantly, a desire to peaceably reform the Church.

“All the birds in Chelsea came to him to be fed”

Thomas’ career as a scholar, writer, and lawyer afforded him a happy, fulfilling living, and won him great acclaim in Renaissance England. In 1505, Thomas married a woman named Jane, and together they had four children. The More house always brimmed with laughter and became a fashionable center of English intellectual life. Erasmus wrote a detailed profile of Thomas, describing him as a jovial, carefree, and witty man with an easy smile. His generosity and public speaking abilities knew no equal, and Erasmus mused that, “All the birds in Chelsea came to him to be fed.”

Following Jane’s death in 1512, Thomas married a woman named Alice Middleton. He continued writing poetry and historical accounts, and translating Latin classics. His magnum opus, Utopia, was published in 1516. The book presented a fantasy world where people lived on an island in perfect harmony, with reason and goodwill reigning supreme. Fights over power and money did not exist in Utopia, whose people had few laws, practiced general religious tolerance, and only fashioned useful objects. Written in Latin, the text presents a piquant blend of social teaching, political and religious commentary, and clever wordplay.

After being knighted in 1521, Thomas continued to grow more prominent in public life, serving as speaker of the House of Commons in 1523 and becoming lord chancellor to King Henry VIII in 1529. He was the first layman to serve in the position. However, only a few years into his tenure there, the Church of England became sorely divided over King Henry VIII’s marital affairs. Thomas had strong moral objections to the annulment of Henry’s marriage to Catherine of Aragon and resigned from his position in 1532. His resignation was not enough, though; less than two years later, Thomas was imprisoned following his refusal to sign Henry’s Act of Succession. As he languished in a dank prison cell for over a year, Thomas faced pressure from his replacement to affirm the Act of Supremacy, which would declare Henry head of the Church in England. Thomas remained steadfast, however, staying true to his conscience and opposing the act. Henry VIII was incensed that the illustrious Thomas More refused to support him, and sentenced him to death.

Spreading Light in the Face of Darkness

Even when faced with his execution in 1535, Thomas injected humor into the situation. As he was led up a ramshackle platform to be beheaded, he joked to the attendant, “I pray you, Mr. Lieutenant, see me safe up, and for my coming down, let me shift for myself.” His attitude was one of conciliation and exhortation; when his executioner begged his forgiveness, Thomas embraced him. He then recited Psalm 51 to the spectators and requested their prayers for the Church and the king. In a final act of defiance and levity, after placing his head on the block, he pulled his long grey beard out from under his chin and said, “It is a pity to cut anything that has not committed treason.”

The Legacy of St. Thomas More

“Whenever men or women heed the call of truth, their conscience then guides their actions reliably towards good. Precisely because of the witness which he bore, even at the price of his life, to the primacy of truth over power, Saint Thomas More is venerated as an imperishable example of moral integrity.”