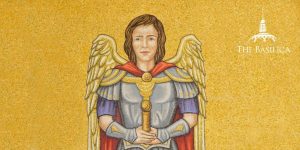 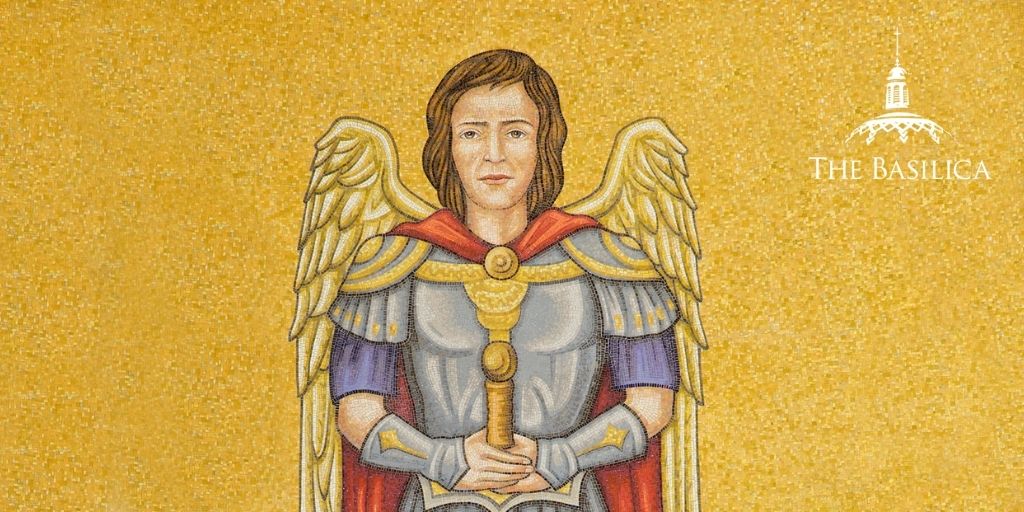 As we celebrate veterans and those in the armed forces this November, we also reflect on the role of St. Michael the Archangel, whom the faithful have long looked to for protection in times of peril. The patron of the military and police forces, St. Michael is a fierce warrior and defender of the children of God. Today, we invite you to learn more about St. Michael and where he is portrayed in the Basilica.

St. Michael in the Bible

Michael is referred to as an “archangel,” indicating a degree of authority in an angelic hierarchy. In Daniel, he is mentioned multiple times: verse 10:13 calls him a “prince,” and Daniel 12:1 also relates:

“At that time there shall arise Michael, the great prince,
guardian of your people;

It shall be a time unsurpassed in distress
since the nation began until that time.

At that time your people shall escape,
everyone who is found written in the book”

Michael doesn’t only serve as a messenger; he is also a dauntless warrior, leading battles against demonic forces. Jude 1:9 tells us that Michael “argued with the devil in a dispute over the body of Moses,” and Revelation 12:7-9 describes Michael’s epic battle against the dragon in heaven:

“Then war broke out in heaven; Michael and his angels battled against the dragon. The dragon and its angels fought back, but they did not prevail and there was no longer any place for them in heaven. The huge dragon, the ancient serpent, who is called the Devil and Satan, who deceived the whole world, was thrown down to earth, and its angels were thrown down with it.”

St. Michael in the Basilica

St. Michael is featured in multiple places around the Basilica. He appears alongside the litany of North American Saints in shimmering mosaic tile in the Trinity Dome, as well as next to Christ in the Christ in Majesty mosaic. In The Our Mother of Perpetual Help Chapel, St. Michael is also portrayed next to Christ – but here Jesus is a child, frightened by the instruments of the passion carried by the archangels and seeking the protection and help of his mother. The floor of the Immaculate Heart of Mary Chapel has a design of the Claretian seal, which features St. Michael, and in the Mary the Immaculate Queen of the Universe relief on the north façade, Michael and Gabriel support the entire scene.

Whether invoking the protection of St. Michael for yourself or for a loved one in the civil and military service, you can take comfort in knowing God uses His angels to watch over us. As Pope Francis once said of Michael:

“Michael — which means: ‘Who is like God?’ — is the champion of the primacy of God, of his transcendence and power. Michael fights to reestablish divine justice; he defends the People of God from their enemies and above all from the arch-enemy par excellence, the devil. And St. Michael triumphs because in him it is God who acts… Even if the devil is always trying to scratch the face of the Archangel and the face of man, God is stronger; His is the victory and His salvation is offered to every human being. On the journey and in the trials of life we are not alone, we are accompanied and sustained by the Angels of God, who offer, so to speak, their wings to help us overcome the many dangers, to be able to fly above those realities that can make our lives difficult or drag us down.”

In honor of St. Michael the Archangel, we invite you to light a candle today at the National Shrine. Vigil candles burn in the chapels throughout the Great Upper church and lower crypt level of the National Shrine. Each candle represents the faith of the supplicants and their fervent prayers entrusted to the loving intercession of the Blessed Mother.

Light a candle
St. Josaphat: A Champion for Reform and Reunification
Basilica Insider: Altar Mosaics of the Crypt Church