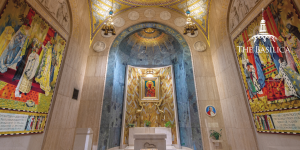 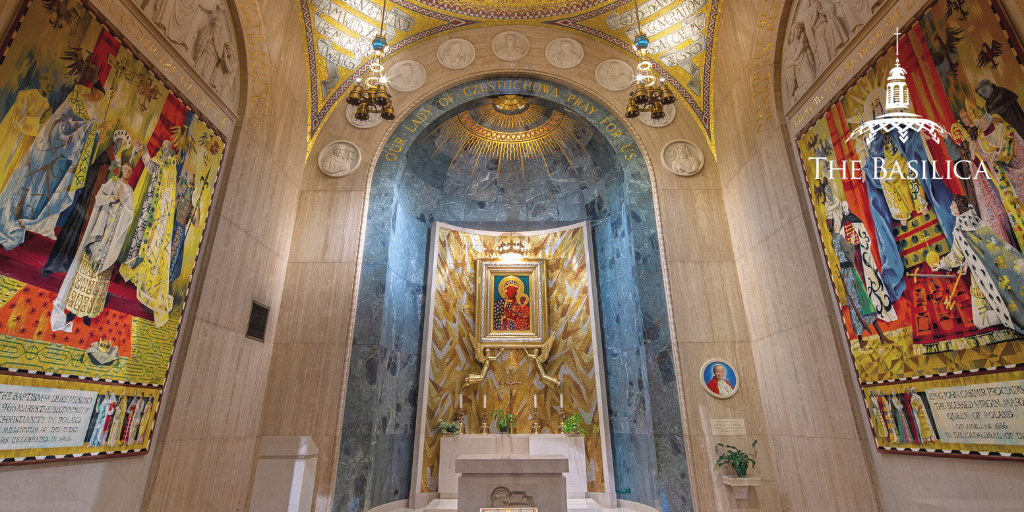 On November 12, we celebrate the Memorial of St. Josaphat, a courageous bishop and martyr who sought to reform the Ruthenian Church in the 17th century. In the face of extreme hatred and opposition, he never wavered in his efforts to bring the Church closer to God. He is portrayed in the Basilica in the Our Lady of Czestochowa Chapel.

Born as John Kunsevich in 1580, St. Josaphat took orders with his friend Joseph Rutsky in 1604 in Vilna, a region in present-day Poland. There, he took the name Josaphat, and worked with Joseph to reform the Ruthenian church, which covered the areas of present-day Belarus and Ukraine.

The pair was especially concerned with certain problems within the Church – including laziness and degeneracy among monks, remarriage among secular clergy, and control of church lands by those outside the church. Joseph and Josaphat ultimately desired union with Rome – a contentious position, as many local church leaders did not want to submit to the pope’s oversight, especially since those in Rome knew nothing about the area’s culture and differing Christian traditions.

As they fought for reform, they also ascended to positions of greater influence and continued to draw opposition; at Caves monastery, the monks disliked Josaphat so much that they threatened to drown him. He was also called a “robber of souls” and criticized for “turning Latin.”

Josaphat’s greatest opponent was Leo Sapieha, the chancellor of Lithuania, who believed that the reformers were creating political instability and making the area vulnerable to Cossack attacks. To besmirch Josaphat’s name, he wrongfully accused him of encouraging violence and of closing non-Catholic churches. Meletius Smotritsky, bishop of Polotsk, also hated Josaphat, who he viewed as a rival, and his followers plotted against Josaphat.

The Plot Against Josaphat

As part of the sabotage effort, a local priest named Elias went to Josaphat’s home to antagonize him and his servants. Josaphat asked Elias to desist, but he refused, so Josaphat had him arrested. This incited the anger of Josaphat’s opponents, and a violent mob stormed his home, calling out “Kill the papist!” They proceeded to knock him on the head with a halberd before shooting him and throwing his body into the Dvina River.

But Josaphat had not labored in vain; following his death, movement was made in the unification efforts even as the Church struggled with divisions. He was canonized in 1867, and today stands as an example of perseverance and bravery.

In honor of St. Josaphat, we invite you to light a candle today at the National Shrine. Vigil candles burn in the chapels throughout the Great Upper church and lower crypt level of the National Shrine. Each candle represents the faith of the supplicants and their fervent prayers entrusted to the loving intercession of the Blessed Mother.