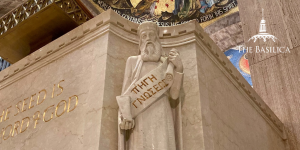 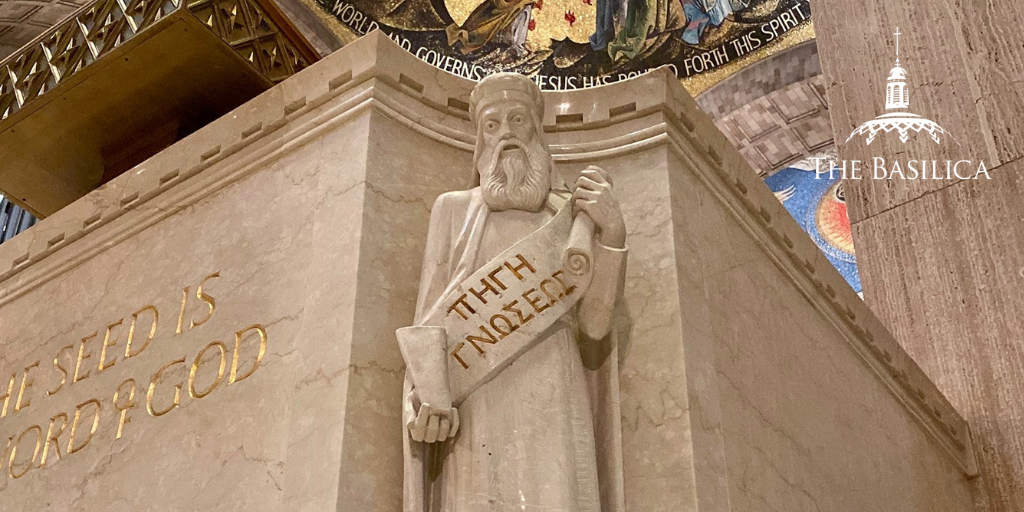 On December 4, we celebrate the feast day of St. John Damascene, who played a pivotal role in the debate over iconography. A thoughtful and intelligent man, he was deeply committed to the significance of beauty in drawing people to faith, especially through art. We invite you to discover more about his life and where he is depicted in the Basilica.

Born to a prosperous Christian family in 690, St. John Damascene was raised in Damascus, Syria. John’s father was determined to give him a proper education and purchased a learned Sicilian slave named Cosmas to be his tutor. Cosmas gave John a robust education in science, mathematics, literature, and logic, equipping John with the skills to take his father’s place as the treasurer of the caliphate when he was old enough.

Life as a Monk

After working as treasurer for a few years, John grew weary of the court lifestyle and journeyed to Israel, where he and his adopted brother (also named Cosmas), became members of the St. Sabas monastery near Jerusalem. It was there that John discovered his appreciation of art and began composing hymns and writing books with his brother, when not performing monastic duties. During this time, a heated debate over iconography divided the Church; some believed that gazing upon physical depictions of Jesus, Mary, and the saints was a form of idolatry. However, John and Cosmas promoted the idea that such depictions were not idols, but tools that could be used to encourage devotion and reverence among the faithful. Though the Byzantine emperors criticized John for his strong advocacy of iconography, he felt that God would want the faithful to appreciate wonder and beauty wherever it could be found, saying:

“God, who is good, and greater than any goodness, was not content with the contemplation of himself, but desired that there should be beings benefited by him, who might share in his goodness: therefore he created from nothing all things, visible and invisible, including man, a reality visible and invisible. And he created him envisaging him and creating him as a being capable of thought, enriched with the word, and orientated towards the spirit… We must allow ourselves to be filled with wonder at all the works of Providence, to accept and praise them all, overcoming any temptation to identify in them aspects which to many may seem unjust or iniquitous.”

After living at the monastery, John was ordained and served as a priest in Jerusalem. However, he found that he preferred life as a monk, and soon returned to St. Sabas monastery, where he spent the remainder of his life. He continued his creative explorations, writing poetry as well as more serious works on theology, philosophy, morality, and Scripture. His three Discourses against those who calumniate the Holy Images are some of his most acclaimed works. John passed away in 749 at the age of 59, and was declared to be a Doctor of the Universal Church by Pope Leo XIII in 1890 for his contributions to the faith. He is portrayed in a sculpture in the Great Upper Church, which ornaments one of the corners of the Botticino pulpit.

Speech given by Pope Benedict XVI at St. Peter’s Square on Wednesday, 6 May 2009. The Vatican

3 Prayers to Close the Year of St. Joseph
Choir of the Basilica Christmas Concert