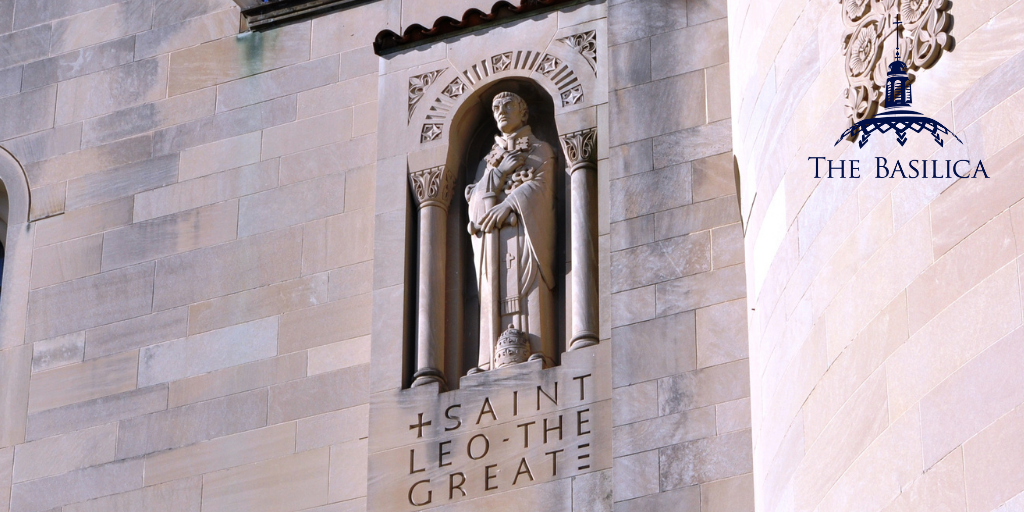 On November 10, we celebrate the feast day of Saint Leo the Great, a dedicated theologian and leader of the Church, and a firm believer in the Primacy of the Roman Church. Today, we invite you to learn about how he helped resolve some significant divisions within the Church and clarified key doctrines regarding Christ’s incarnation. He is portrayed in the East Façade of the Basilica.

Little is known about Leo’s early life, except that he was born in Tuscany in the beginning of the fifth century. In approximately 430 A.D., Leo earned a place as a deacon of the Church of Rome. About ten years later, the Roman Emperor’s daughter selected him to participate in a special peace mission in Gaul. However, when Pope Sixtus III passed away later that same year, Leo was called back to Rome to be consecrated as the new Pope.

Helping Resolve Divisions in the Church

At the time of Leo’s succession, the Roman Empire had fallen and was frequently threatened by barbarian attacks, and there was division in the Church over the true nature of Christ. Leo used his position to provide a steadying hand to the Church – and to Rome, through his thoughtful leadership. In 451, when 350 Bishops gathered together in the Council of Chalcedon to discuss Christology, Leo developed a terminology which allowed the Church to clarify the confusion that had emerged regarding the humanity and divinity of Christ. According to the treatise Leo presented to the Council, he stated that Christ is “one Person [with] two natures,” a statement which allowed the Church to settle the argument once and for all, adopting this idea as a key concept of orthodoxy (Butler).

As Pope John Paul II declared in a speech to the Parish of Saint Leo in 1986:

“Saint Leo the Great, as you know, was one of my predecessors as Bishop of Rome and Successor of Saint Peter. In addition to his other talents he was an eloquent preacher of God’s word. One truth that he vigorously proclaimed was the ever-present reality of Jesus Christ. Christ’s life did not end with his death on the Cross, and the Church does not live with her gaze fixed only on the past. As Saint Leo said in one of his sermons: ‘Not in history alone do we know these things but in virtue of present achievements’.”

Staving off Attila the Hun

The most notable event of Leo’s papacy took place in 452, when he rescued Rome from the destruction of the Huns. After Attila and his army invaded Italy and prepared to march upon Rome, Pope Leo and two Roman senators approached him unarmed, and begged him to halt the attack. Because of Leo’s diplomacy, Attila conceded to his request, and departed the peninsula. However, three years later, when Leo tried once again to prevent an offensive by Genseric’s Vandals, he failed to do so. But because of the pleas of Leo and his clergy, Genseric decided only to plunder the city, and not to burn it to the ground.

Leo served as Pope for over 21 years, until his passing in 461. In honor of his association with St. Peter, his remains were placed near St. Peter’s tomb, and his relics can be found at the Vatican Basilica. Additionally, in 1754, St. Leo was declared a Doctor of the Church by Pope Benedict XIV, in recognition of his efforts to strengthen the “authority and prestige” of the Roman See (the Vatican). Thanks to Leo’s wisdom and guidance as pope, the Church continued to act as a “steadying international institution” throughout the medieval era (Butler). Saint Leo’s life serves as a faithful reminder to us that even in the face of impossible odds, we can do all things through Christ who strengthens us!

Touring the Basilica: What You Need to Know
Faith During COVID-19: The Global Impact of Online Mass