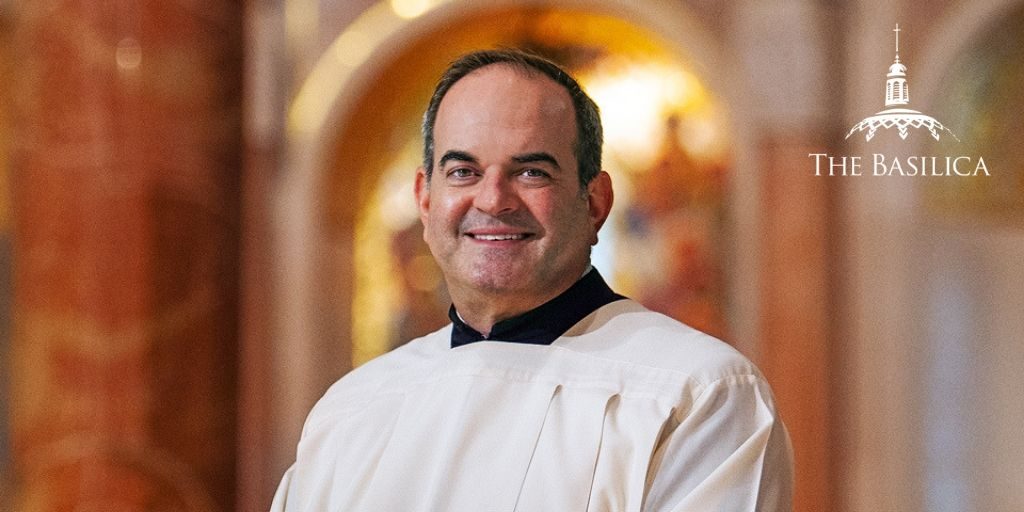 The musicians of the Basilica strive to transform hearts and minds through the power and beauty of sacred music in the Roman Catholic Liturgy. They are guided by the belief that inspired liturgy leads to a transformation, deepening and awakening one’s faith. To share insight into how this beautiful vision is made a reality, Dr. Peter Latona, Music Director for the National Shrine, speaks about his experience.

Today, Dr. Latona takes readers behind the scenes, telling the story of how he became interested in sacred music, sharing what a typical week looks like in the Music Department at the Basilica, and gives advice to those considering pursuing sacred music as a vocation.

This post is Part I in a series. View Part II, Part III, and Part IV.

When did you first become interested in sacred music? What inspired you to commit yourself to liturgical music?

I grew up in an Italian neighborhood in Garfield, New Jersey, a city just ten miles from Manhattan. My home parish, Our Lady of Mount Virgin, was a beautiful church, modeled after her namesake in Avellino, Italy. From my earliest years, I can remember being taken in by the beautiful Liturgy, the singing of the choir (they even sang settings of the ordinary in four-part harmony back in those days) and the sounds of the fine pipe organ. After serving the evening Mass, the sacristan would allow me into the choir loft to play the organ and the parish secretary would allow me practice time during the week.

I studied organ with a local instructor and then moved on to study with Robert MacDonald who was, at that time, organist at Sacred Heart Cathedral in Newark, NJ. The beauty of the cathedral and the excitement of playing the magnificent organ there further inspired my love of the Liturgy and the sights and sounds of Church Music. This, coupled with frequent visits to New York City to hear music at St. Thomas Fifth Avenue as well as places like Riverside, St. Bart’s and St. Mary’s sealed my fate, as it were.

The administrative tasks can really pull you in all sorts of directions but I think that I am primarily event-driven; pouring all of my energies, the best I can, into the next Sunday or major celebration, working as hard as I can to ensure all musical aspects (Psalms, descants, service playing, choral music, etc.) are as good as they can be.

Sometimes that means practicing more, composing a new setting or editing an existing setting, or finding new things to do or say in rehearsal to inspire. When I rehearse with the choir – or on the organ – or when composing, I strive for musical perfection, of course, but I am always focused on making music that is communicative, expressive and impactful.

What advice do you have for musicians who are interested in sacred music?

Study hard, listen as much as possible to music of all kinds and learn what other musicians are doing in parishes and cathedrals. That last bit is particularly important. I personally learned so much (what to do and what not to do) by really following and observing sacred liturgical music at many other places. With many services live streamed and/or available on the web, this is actually not difficult to do these days.

Dr. Peter Latona is the Director of Music for the Basilica of the National Shrine of the Immaculate Conception (Washington, D.C.), the preeminent Marian shrine of the Roman Catholic Church in the United States. Recognized as a conductor, composer, organist, improviser, and teacher, he is dedicated to providing the highest standard in sacred music within the context of the Roman Catholic Liturgy. View his full bio.

Many thanks to Bridgette Wargovich, Director of Music and Organist at Corpus Christi Parish in East Sandwich, MA, for conducting this interview with Peter Latona. Bridgette received her DMA in Organ Performance from Boston University and is dedicated to preserving and promoting the musical treasure of the Church.