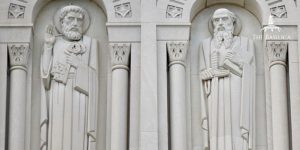 St. Peter and St. Paul: two apostles. Two leaders. Two flawed individuals whom God chose and transformed for the use of His glory and divine purpose. This Feast Day of St. Peter and Paul, June 29, we would like to reflect on the lives and legacies of these two faithful spiritual leaders and disciples of Christ.

Perhaps the most significant leader of the early church, the apostle St. Peter was originally called Simon. After he decided to follow Christ, he was instructed to change his name to Peter (in Greek, Cephas) which means “rock.” The irony is not lost on the attentive reader: when he first became a disciple, Peter’s disposition was anything but stable. Throughout Scripture we see the pendulum of Peter’s responses swing from ecstatic highs one minute to desperate lows the next.

Yet Peter’s impulsive nature catalyzes him to “leave everything” to follow Jesus after Jesus performed a miracle with his catch of fish (Luke 5:11). When Jesus walked on water and bid Peter to come out to him, Peter excitedly began to tread over the surface toward him until he was suddenly filled with doubt, and began sinking. On another occasion, when Jesus began washing the feet of the disciples, Peter declared “You shall never wash my feet!” and upon being rebuked, asked Jesus to wash his head and hands as well. Perhaps most famously, Peter denied Jesus three times after having zealously sworn he would follow Jesus unto death the night before. (Luke 22:33; 54-62)

But while Peter may have been weak, that did not stop God from choosing to mold him into a stable leader of the faithful. Peter would go on to perform miracles and speak powerfully on the day of Pentecost, paving the way for the strengthening and spreading of Christianity throughout the world – thus becoming worthy of his title of the “Rock” of the community of the faithful. In baptizing the Roman centurion Cornelius, Peter led non-Jews to become part of the body of Christ.

Like Peter, St. Paul also was originally called by a different name: Saul of Tarsus. Saul was a learned Jewish scholar, and a zealous persecutor of Christians, until God revealed Himself to him. One day when Saul was headed to Damascus to persecute Christians, the Lord shone a bright light from the heavens, blinding Saul and asking him “Saul, Saul, why are you persecuting me?” (Acts 9:4) God told Saul to go into the city and find the disciple Ananias, who would heal him and reveal God’s truth to him. In a vision, the Lord asked Ananias to go to Saul; yet Ananias was hesitant because he knew of all the evil deeds Saul had committed against God’s faithful. But God told him, “Go, for this man is a chosen instrument of mine to carry my name before Gentiles, kings, and Israelites.” (Acts 9:15) Thus, Ananias found Saul and laid his hands on him, restoring his sight and filling him with the Holy Spirit.

Unlike Peter, however, Saul’s name was not changed by God; rather, it was Luke who began to refer to him as Paul later in Acts when he set sail for Paphos (in chapter 13). Still, Peter and Paul’s stories demonstrate the radically transformative power of Christ. We are all but flawed instruments, and yet despite our flaws, God can transform us and achieve great things through us. Paul would go on to significantly mold the Mediterranean’s early Christian communities, traveling and writing countless letters of spiritual guidance and insight. Like Peter, Paul also expanded the inclusivity of the Church, emphasizing the fact that the Christian faith was open to Jews and Gentiles alike.

Uniting the World: Our Lady of the Rosary & Our Lady Queen of Missions
An Exhortation to Prayer: The Global Rosary Relay