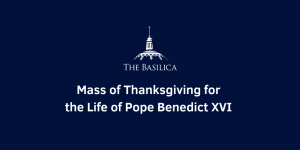 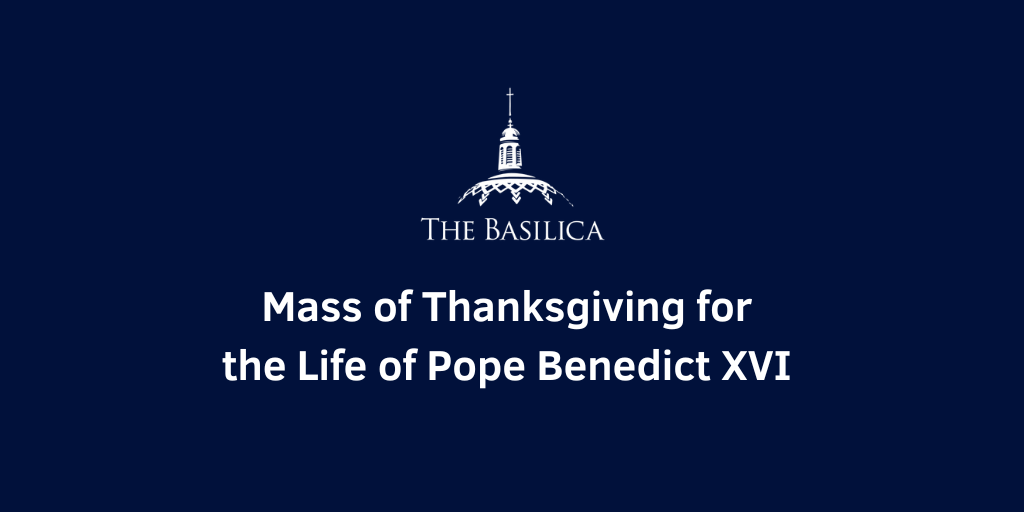 Mass of Thanksgiving for the Life of Pope Benedict XVI

All the Faithful Invited to Attend

A Mass of Thanksgiving for the Life of Pope Benedict XVI will be celebrated by Archbishop Christophe Pierre, the Apostolic Nuncio (papal ambassador) to the United States, on Thursday, January 5, at 12:10 p.m. in the Great Upper Church of the Basilica. All the faithful are invited to participate in the Mass to pray for the repose of the late Holy Father’s soul and to offer thanksgiving for his life and ministry. The Mass is open to the public with no ticketing or reservations.

Of Pope Benedict XVI’s passing, Monsignor Walter Rossi, Rector of the Basilica, said, “It is always sad when anyone dies, no matter how old or young. With the passing of Pope Benedict XVI, we at Mary’s Shrine are sad because we knew him personally from when he came to visit us in 2008. We offer prayers for his eternal rest, but also give thanks to God for his 71 years as a priest, his 45 years as a bishop, and his almost eight years as Pope. With a life of service to the Church and God’s people, may he rest in peace and Our Lady usher him into the presence of her Son.”

Pope Benedict XVI visited the Basilica on April 16, 2008, on the first day of his Apostolic Journey to the United States. During his visit, he presided over Solemn Vespers, addressed the Bishops of the United States, and bestowed the Papal Rose upon the Basilica, a rare honor granted to a church of special significance. Artifacts from his visit to the Basilica include the Papal Rose, the papal throne crafted for him to preside over vespers and his meeting with the bishops, and the zucchetto he wore during his visit to the Basilica are on display for public viewing.

For those unable to attend in person, the Mass of Thanksgiving of the Life of Pope Benedict XVI will be livestreamed at www.nationalshrine.org/mass.

View Press Release as a PDF
The Adoration of the Magi: Recognizing Christ’s Kingship at Epiphany
Statement on the Passing of Pope Emeritus Benedict XVI from Mary's Shrine