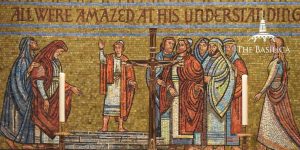 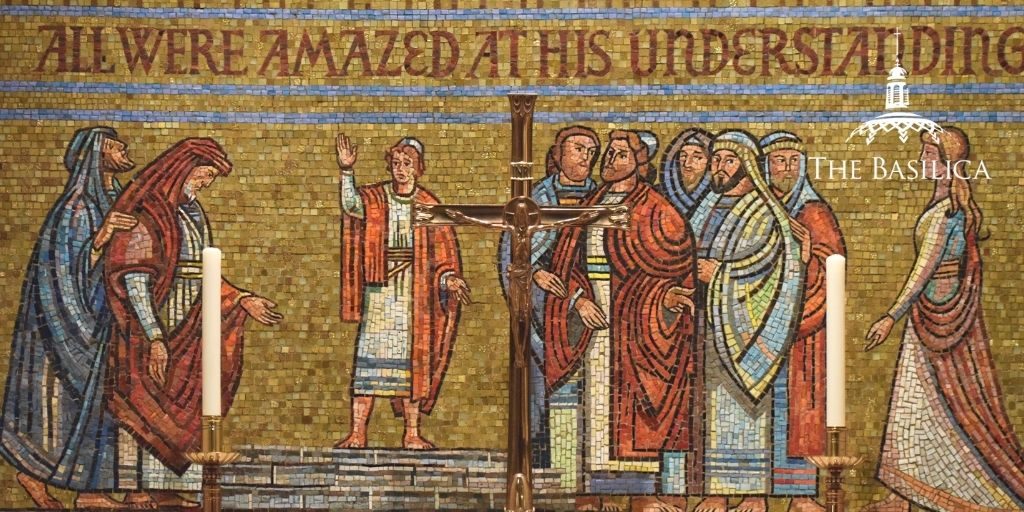 This post is the fifth installment in the Basilica’s Biblical Figures series, which highlights the stories of the individuals throughout the Scriptures who are portrayed in “America’s Catholic Church.” While some of them inspire us with their unwavering faithfulness, others serve as sober reminders of the consequences of sin. All of them have lessons to teach us about Christian living.

As we read the story of Daniel, we can be encouraged by his example of steadfast faith and God’s providence.

Daniel lived in captivity in Babylon along with his friends Shadrach, Meshach, and Abednego. Though they faced pressures to conform to Babylonian society and give up the ways of their people, they stood strong in their faith, and God blessed Daniel with wisdom and the ability to interpret dreams. When he was called before King Nebuchadnezzar, Daniel was able to interpret what his dream meant without even hearing it! The dream foretold the future conquering of the Babylonian kingdom. Because of his interpretation of the dream, Daniel was appointed to be ruler of the province of Babylon and chief prefect over all the wise men of Babylon.

Later, King Nebuchadnezzar had another dream where a giant tree was cut down. Daniel interpreted this dream for him, saying it meant that he would be cast out from society until he recognized that it was God who had given him his glory, and not himself. A year later, the dream came to pass, as Daniel 4:30 details:

Nebuchadnezzar was cast out from human society, he ate grass like an ox, and his body was bathed with the dew of heaven, until his hair grew like the feathers of an eagle, and his nails like the claws of a bird.

The Reign of Belshazzar

When Nebuchadnezzar recognized the God of heaven, he was restored to his throne – seven years after he was cast out– and the rest of his reign was blessed. However, he was soon succeeded by his son Belshazzar, who did not respect the Lord. During a wild drunken feast, he and his guests drunk out of the vessels that his father had taken from the temple in Jerusalem, praising their idols. In response to his dishonorable behavior, a hand appeared and wrote words in an unknown language on the wall. The king was terrified and called Daniel to translate. He told Belshazzar:

“This is the writing that was inscribed: Mene, Tekel, and Peres. These words mean: Mene, God has numbered your kingdom and put an end to it; Tekel, you have been weighed on the scales and found wanting; Peres, your kingdom has been divided and given to the Medes and Persians.”

Then by order of Belshazzar they clothed Daniel in purple, with a chain of gold around his neck, and proclaimed him third in governing the kingdom. That very night Belshazzar, the Chaldean king, was slain. – Daniel 5:25-30

Darius the Mede succeeded Belshazzar as ruler, and soon saw how competent Daniel was. He considered appointing Daniel over the whole kingdom, which provoked the other ministers and satraps to plot against Daniel. They convinced Darius to pass a law condemning to death anyone who worshiped someone other than himself.

After the proclamation had been signed, Daniel continued his practice of praying to God three times a day, and was caught by the satraps. Darius was greatly saddened when he heard what happened, but he could not reverse the decree. Daniel was put into the lions’ den, but through God’s provision, he survived:

The king rose very early the next morning and hastened to the lions’ den. As he drew near, he cried out to Daniel sorrowfully, “Daniel, servant of the living God, has your God whom you serve so constantly been able to save you from the lions?” Daniel answered the king: “O king, live forever! My God sent his angel and closed the lions’ mouths so that they have not hurt me. For I have been found innocent before him; neither have I done you any harm, O king!” This gave the king great joy. At his order Daniel was brought up from the den; he was found to be unharmed because he trusted in his God. The king then ordered the men who had accused Daniel, along with their children and their wives, to be cast into the lions’ den. Before they reached the bottom of the den, the lions overpowered them and crushed all their bones. – Daniel 6:20-25

Darius declared that God was to be revered and feared because He had preserved Daniel.

What We Can Learn from Daniel

There are many important themes throughout the book of Daniel. First, we see his steadfastness during the time of exile. The nation of Israel was scattered. Daniel was captured and taken to a foreign land, and yet he remained faithful to the God of his people, in spite of the pressure around him to conform to Babylonian culture.

We see Daniel’s faithfulness demonstrated in his commitment to prayer throughout the book of Daniel – both in his daily routine and as he approaches major tasks. Daniel 2:18 describes him asking Shadrach, Meshach, and Abednego to pray that God would reveal the king’s dream, and Daniel 6:11 tells of his habit of prayer: “Even after Daniel heard that this law had been signed, he continued his custom of going home to kneel in prayer and give thanks to his God in the upper chamber three times a day, with the windows open toward Jerusalem.”

A Demonstration of God’s Providence

Most importantly, the story of Daniel is a story of God’s glory and God’s providence for His people. God constantly demonstrated His glory through Daniel, making His name known among the people of Babylon. He exalted Himself above the rulers of Babylon, revealing the limits of their power. He humbled King Nebuchadnezzar by inhibiting his mental capacity after he reveled in his greatness. He smote Belshazzar, dividing his kingdom in two. In His power, He protected Daniel in the lion’s den ­– when Darius was powerless to do so.

Throughout the whole story of Daniel, God not only provided for Daniel’s needs, but He blessed him with wisdom and knowledge to interpret dreams and help govern the kingdom. He granted him favor with multiple rulers, and preserved his life when others plotted against him. In His providence for Daniel, God brought glory to Himself and showed that He is ultimately in control.

In the Basilica, Daniel is portrayed in the east buttress of the south entrance, the west apse column capital in the Crypt Church, and the Finding in the Temple Chapel of the Upper Church.

Why Did Jesus Speak in Parables?
A Prayer of Marian Protection: The Devotion of Pokrov