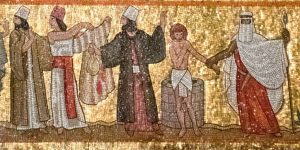 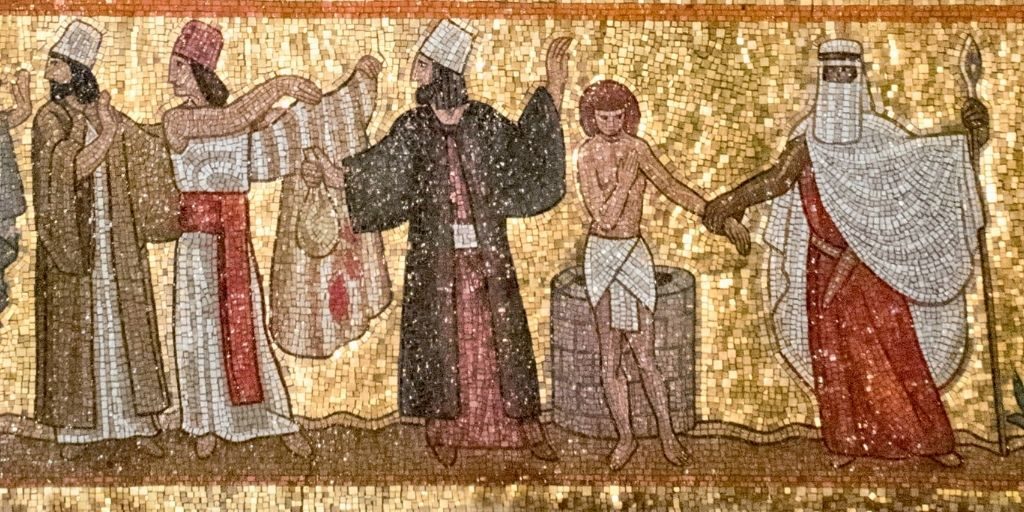 “Even though you meant harm to me, God meant it for good, to achieve this present end…”
— Genesis 50:20

Many are familiar with the story of Joseph; with family drama, a colorful tunic, and bizarre dreams, it stands out among the narratives of the Old Testament. But the story of Joseph is also a powerful testament to God’s providence. Though Joseph suffered injustice at the hands of his brothers and of Potiphar’s wife, God used what men intended for evil to not only provide for him and his family, but for the nation of Egypt and the whole world. When Joseph’s jealous brothers sold him into slavery, little did he know that he would eventually become second in command in Egypt and provide relief for the nations during a worldwide famine.

Joseph was born into a difficult family situation. His father Jacob had labored for seven years to marry Rachel, the daughter of Laban, only to be tricked into marrying her sister Leah. Jacob labored another seven years and was able to marry Rachel, but the tension between the sisters was great. As the sons of Jacob’s favored wife, Rachel, Joseph and Benjamin often received special attention over their other ten brothers.

Joseph and His Brothers

When Joseph was seventeen, Jacob gifted him with a special colorful tunic, which greatly aggravated his brothers. Joseph’s brothers’ hatred grew when he told them of dreams that he had: one where they were gathering sheaves in the field, and all of their sheaves bowed to his, and another where the sun, moon, and eleven stars bowed down to him.

One day, Joseph went to check on his brothers as they were tending the sheep in the fields. His brothers plotted to kill him and throw him into a cistern, but his brother Reuben convinced them to instead throw him into the cistern alive. When a band of Ishmaelites came on their way to Egypt, Joseph’s brothers decided to sell him to the Ishmaelites as a slave. To explain his disappearance to their father, they took his tunic and smeared it with goat blood, making it look as if he had been killed by a wild animal. Jacob was overcome with grief when he thought that Joseph had died.

When Joseph reached Egypt, he was sold to Potiphar, an official in Pharaoh’s house. The Lord blessed him greatly in Potiphar’s house, and Potiphar put him in charge of everything he had. However, Potiphar’s wife tried to seduce Joseph, and when he would not succumb to her requests, she accused him of attacking her. As a result, Joseph was put in prison.

While in jail, Joseph interpreted the dreams of Pharaoh’s cupbearer and baker. The cupbearer was restored to his position, and the baker was killed, just as Joseph predicted. Joseph had asked the cupbearer to remember him when he was freed, but the cupbearer forgot about him until much later, when Pharaoh was troubled by mysterious dreams. It was then that the cupbearer told Pharaoh of Joseph’s ability, and Pharaoh called Joseph before him.

Joseph was able to interpret the dreams, which told of seven good years of harvest, followed by seven years of famine, and suggested that Pharaoh appoint someone to gather a supply to last through the years of famine. Pharaoh was impressed by Joseph and saw the Spirit of God in him, so he appointed Joseph as his second in command.

Joseph married an Egyptian woman, and had two sons before the famine, Manasseh and Ephraim, meaning “God has made me forget entirely my troubles and my father’s house” and “God has made me fruitful in the land of my affliction.” He oversaw the collection of grain during the fruitful years, and when the time of famine came, Egypt did not want for food.

In fact, since Egypt was the only nation that had prepared for the famine, people from around the world came there to buy food, including Joseph’s brothers. Joseph recognized them immediately, but they did not recognize him. He accused them of being spies, and when they explained their family situation, he asked them to return with their youngest brother, because he wished to see Benjamin. When he filled their sacks with grain, he had their money replaced in their sacks. His brothers realized that the money was in their sacks when they arrived home, but Jacob would not allow them to return until they were out of grain.

When they arrived in Egypt, Joseph invited them all to feast with him, giving Benjamin a five-fold portion. When they left, he planted a silver goblet in Benjamin’s bag, and sent his men after them. Accusing him of stealing, he acted as if he would make Benjamin his slave. His brothers were distraught and told Joseph that it would break their father’s heart. Joseph was overcome with grief, and sent all his attendants away as he revealed, with great weeping, that he was their brother. They were dumbfounded, and he urged them to return home and bring Jacob back with them. When Jacob arrived, Joseph wept and embraced him. Joseph made an agreement with Pharaoh that his family could settle in the land of Goshen and tend their flocks there.

Later, when Jacob died, Joseph’s brothers were afraid that Joseph would try to take revenge on them; that it was only their father who had been preventing him. They told him that Jacob had asked him to forgive them and said that they would be his slaves. Joseph wept before them and assured them that they had his forgiveness:

But Joseph replied to them: “Do not fear. Can I take the place of God? Even though you meant harm to me, God meant it for good, to achieve this present end, the survival of many people.  So now, do not fear. I will provide for you and for your children.” By thus speaking kindly to them, he reassured them. — Genesis 50:19-21

What We Can Learn from Joseph

Joseph’s story is about God’s providence and Joseph’s faithfulness. Though Joseph was faced with one trial after another, he remained faithful to God, and God blessed him for it. God gave him favor in Potiphar’s house, equipping him with administrative experience that he would need for his role under Pharaoh. Even in prison, the warden gave him responsibilities, and he was also brought into contact with the cupbearer from Pharaoh’s household.

Though it seems unlikely that an Israelite slave could rise to become second in command of Egypt, especially after being in prison, God provided for Joseph by giving him the ability to interpret the dreams of the cupbearer and of Pharaoh himself. Once he became an advisor to Pharaoh, the Lord also blessed him with a wife and children, and gave him the wisdom to oversee the food supply for the entire nation of Egypt.

The story of Joseph is also about forgiveness. Joseph could have held a grudge against his brothers — when they came to him for food, their lives were literally in his hands. However, he did not use the opportunity to take revenge on his brothers for all the suffering they had caused him; instead, he chose to forgive them, and invited them to live in the land of Egypt.

Faces of the Basilica: Greta and Victor David
3 Prayers for Mothers