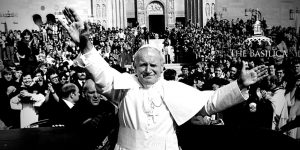 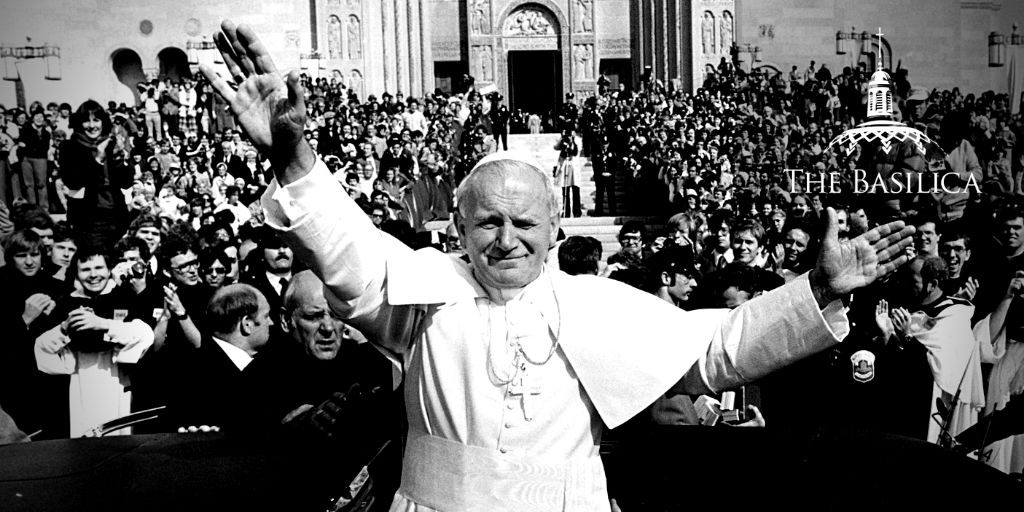 “I leave you now with this prayer: that the Lord Jesus will reveal himself to each one of you, that He will give you the strength to go out and profess that you are Christians, that He will show you that He alone can fill your hearts.” – Pope Saint John Paul II, during his 1979 visit to the National Shrine.

On October 22, we celebrate the Feast of Saint John Paul II. Saint John Paul II was the first reigning Pope to visit the Shrine, and was beloved for his love of justice and dedication to sharing the Gospel with people in all parts of the world.

On May 18 of 1920, Karol Józef Wojtyła was born in Wadowice, Poland, marking a small beginning for one who would become a great man. Following his graduation from high school, he began his studies at the Jagiellonian University of Krakow in 1938. However, in the next year, the university was closed under the German occupation. He later began studying at the underground seminary and eventually was ordained in 1946. In 1948, he earned his doctorate in theology, and in the years that followed became a professor of moral theology and ethics in the major seminary of Krakow.

Pope John Paul II was inaugurated on October 22, 1978. Less than a year later, on October 7, 1979, he became the first reigning pope to visit the National Shrine. Prior to Saint John Paul II’s papacy, previous popes scarcely travelled outside the confines of the Vatican City State. He made it his mission to visit the faithful in all parts of the world. Pope Saint John Paul II spread the Gospel to millions of people in over 120 countries during his papacy, earning him the moniker “the Pilgrim Pope.”

During his visit to the National Shrine, Saint John Paul II expressed the powerful impact and significance of this holy sanctuary:

This Shrine speaks to us with the voice of all America, with the voice of all the sons and daughters of America, who have come here from the various countries of the Old World. When they came, they brought with them in their hearts the same love for the Mother of God that was characteristic of their ancestors and of themselves in their native lands.

Pope Saint John Paul II inspired hope among the politically oppressed through his tireless fight for justice and solidarity, which helped bring about the end of the Cold War. He had the courage to condemn instances of evil in the world, while also extending grace to those who wronged him. On May 13, 1981, Saint John Paul II was travelling in an open car in Saint Peter’s Square when he was pierced by two bullets in an assassination attempt. Fortunately, he was preserved by the hand of God through Our Lady of Fatima, and after five hours of surgery, followed by a lengthy hospital stay, he returned to his ministry and forgave the assassin.

Saint John Paul II had a gift for reaching people of all ages in all places, meeting more individuals than any other pope. His Wednesday General Audiences were attended by 17.6 million people. His heart for young people inspired him to institute the celebration of World Youth Day in 1985.

Saint John Paul II was canonized by Pope Francis on April 27 in 2014. He is portrayed in the Basilica in the Trinity Dome Mosaic.

Biography of John Paul II from The Vatican Website

In honor of Saint Pope John Paul II, we invite you to Light a Candle in the Chapel of Our Lady of Czestochowa where Saint Pope John Paul II prayed during his visit to Mary’s Shrine. Vigil candles burn in the chapels throughout the Upper Church and lower crypt level of the National Shrine, representing the faith and prayers of the supplicants.

Light a candle
Remembering the Faithful Departed: All Saints Day and All Souls Day at the Basilica
St. Luke the Evangelist: Sharing the Powerful Truth of the Gospel