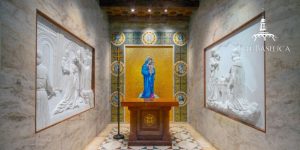 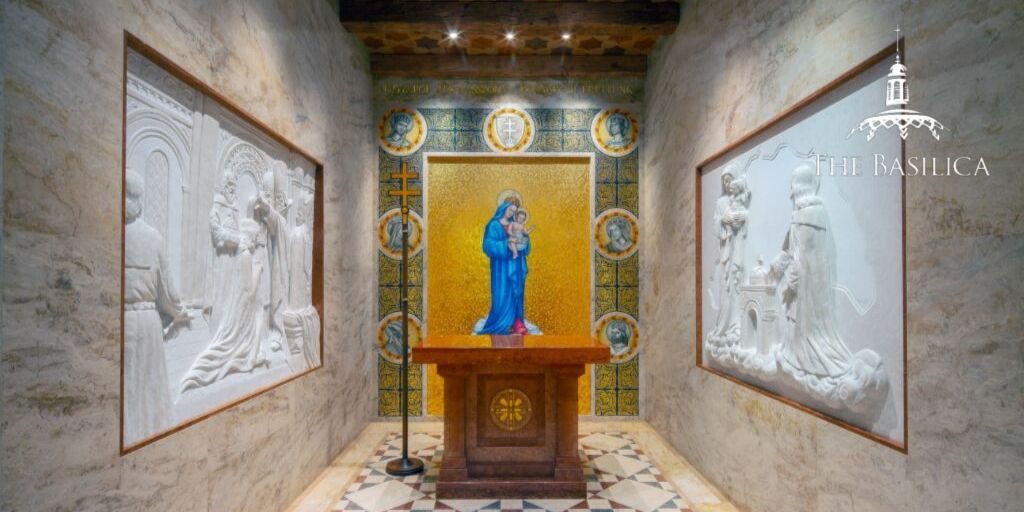 “Send, O Lord, Wisdom down from your glorious throne, that she may be with me and work with me, and that I may learn what is pleasing to you at all times.” – St. Stephen

In August of 2015, the Basilica’s Chapel to Our Lady of Hungary was dedicated. Flanked by breathtaking reliefs and featuring a reredo mosaic of Our Lady, the chapel is dedicated both to the blessed Mother and Saint Stephen, the first Christian king of Hungary. This month, we not only celebrate the dedication of this chapel, but the Feast Day of Saint Stephen on August 16.

Although Saint Stephen was raised by a pagan family, he decided to follow Christ at a young age. In A.D. 1001 on Christmas Day, Stephen assumed the throne as king of Hungary. Determined to unify the country under Christianity, he implemented a series of strict reforms to accomplish this goal. Under Stephen, pagan customs were outlawed. He accelerated efforts to evangelize, and built monasteries and churches across the nation. His rule was not without its difficulties; some of his nephews plotted to murder him, and his son Emeric suffered an early death from a hunting accident. In his later years, Stephen experienced excruciating health complications.

Throughout his rule, Stephen offered assistance to the needy. On one occasion, he donned a disguise in order to sneak unrecognized into a dangerous district and deliver alms to the poor. Unfortunately, his attempt was foiled by a group of ruffians who attacked him and stole the money he had on hand. Saint Stephen, however, reacted graciously, and continued his support of the impoverished.

Keeping Christ at the Center

In spite of his overwhelming responsibilities as ruler, he always made time for prayer, according to historians. Writing to his son Emeric, he once said, “The observance of prayer is the greatest conquest of true salvation…. Continuous prayer is purification and the remission of sins.”

At the dawn of the millennium, the figure of King St. Stephen stands out. He founded the State on the firm rock of Christian values, and for this reason wanted to receive the royal crown from the hands of my Predecessor, Pope Sylvester II. Thus the Hungarian nation was founded in deep unity with the Chair of Peter and bound by close ties to other European countries, which shared the same Christian culture. This culture was the vital sap flowing through the fibres of the developing plant, which assured its growth and vigour, and prepared the extraordinary flourishing that was to come.

Honoring Saint Stephen and Hungary in the Basilica

In 2006, Péter Cardinal Erdő, Archbishop of Esztergom-Budapest and President of the Hungarian Episcopal Conference, petitioned the Basilica to establish a chapel in honor of Our Lady of Hungary and Saint Stephen. That year marked the 50th anniversary of the Hungarian Revolution and War of Independence. The chapel, which was dedicated on August 29 in 2015, was made possible through the generosity of the Hungarian Catholic Bishops Conference, the Hungarian Government, and Hungarian-Americans.

The chapel features the following prayer to the Blessed Virgin Mary:

“O God, through the intercession of the Blessed Virgin Mary, you have given innumerable graces to our nation. Following the decree and tradition of our first King, Saint Stephen, we honor Mary, as our Queen and Patroness on earth. Grant that we may also have eternal joy with her in heaven. Through our Lord Jesus Christ, your Son, who lives and reigns with you in the unity of the Holy Spirit, one God, for ever and ever. Amen.”